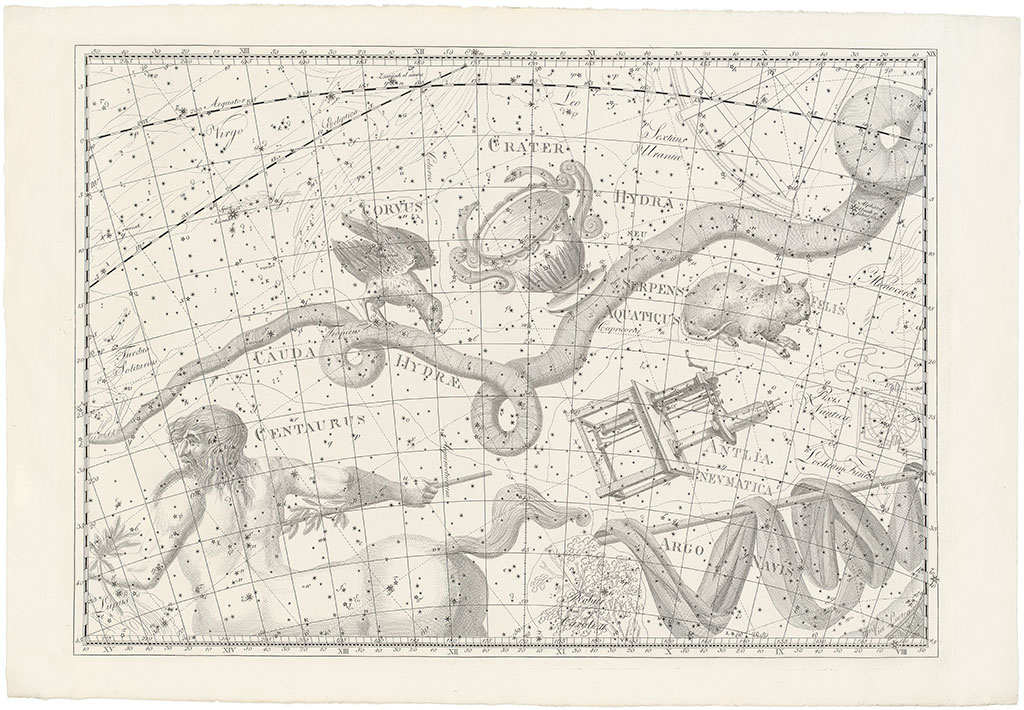 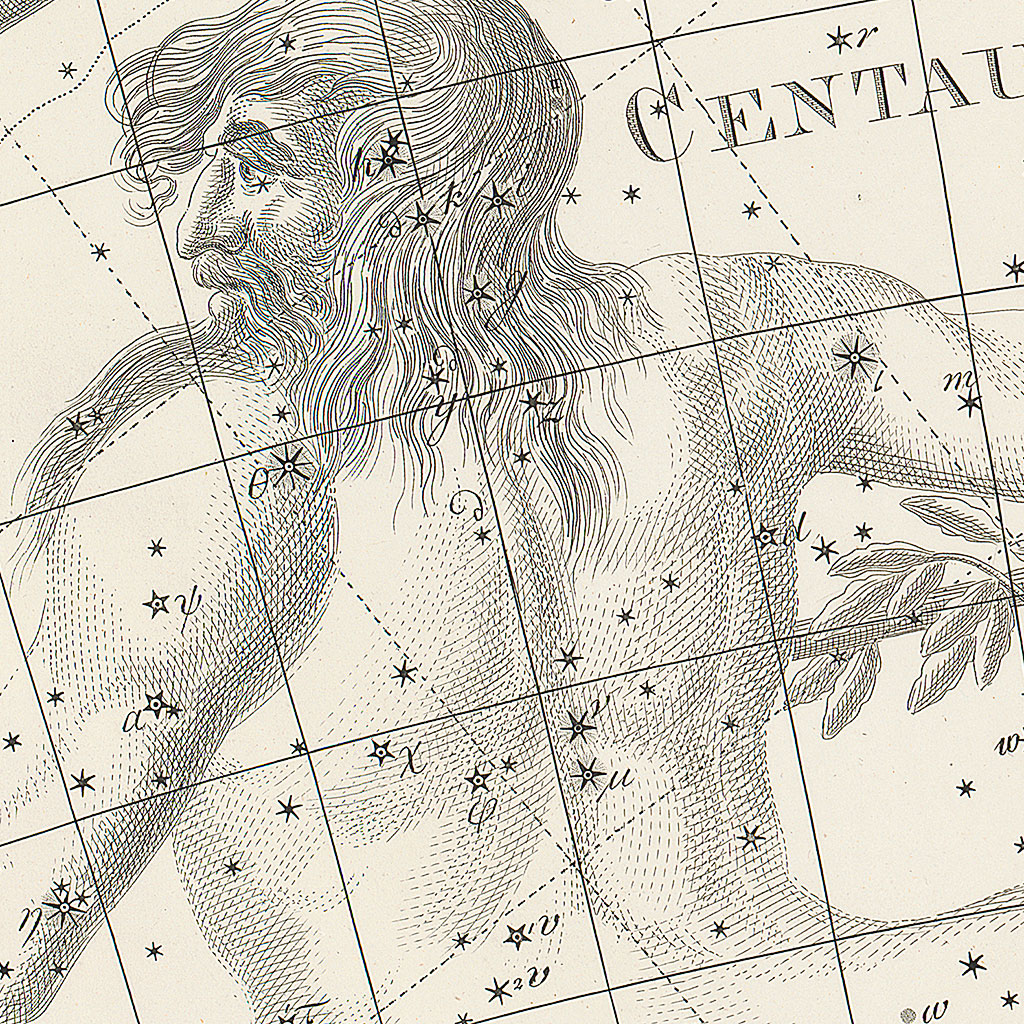 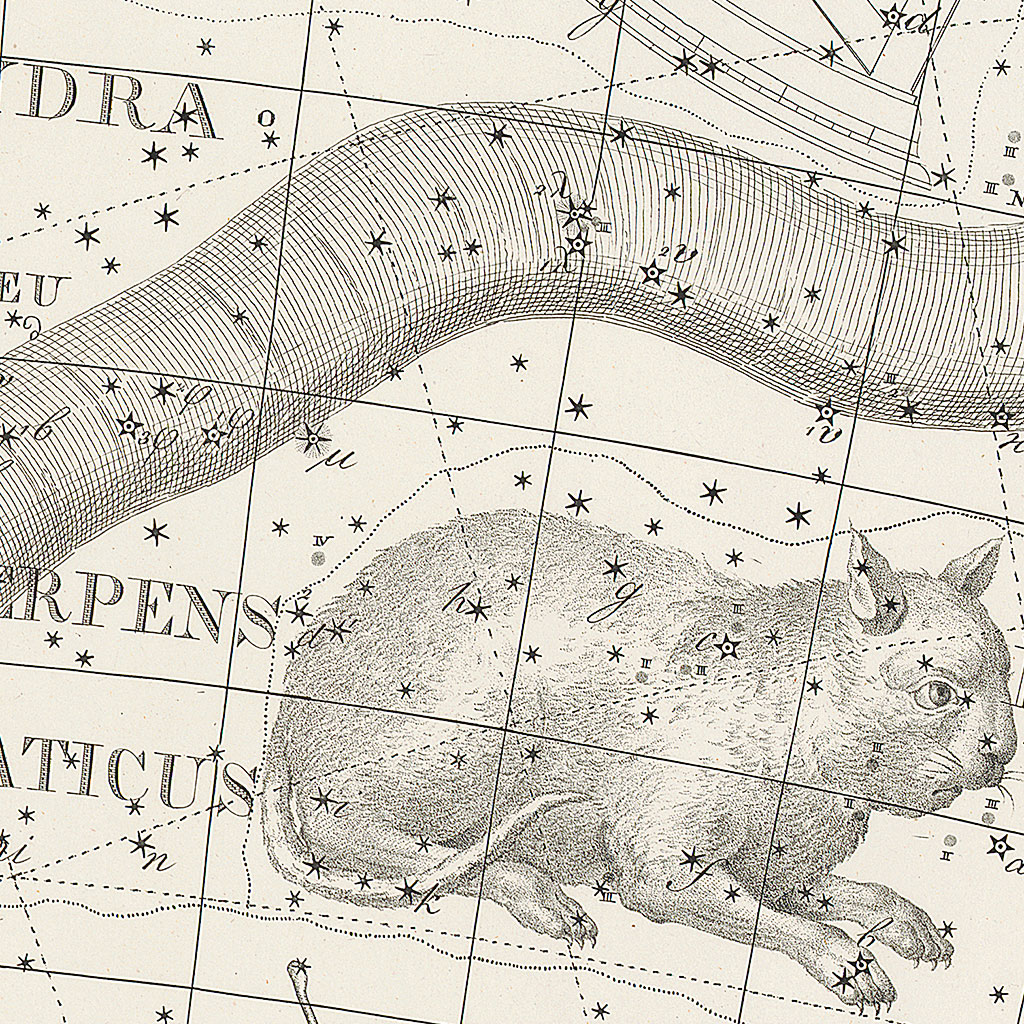 Published by Berolini in Berlin in five parts from 1797 to 1801, Johann Elert Bode’s monumental work, Uranographia sive Astrorum Descriptio… is the largest celestial star map ever produced and the last of the great star atlases of the Golden Age of the Celestial Atlas. The work of thirty astronomers of the preceding 200 years is synthesized in this atlas, including discoveries by Lacaille, Lalande, Messier, and William Herschel. Over 100 constellations and asterisms are depicted, many added by Bode. In addition, it includes all stars visible to the naked eye. Some 2,500 nebulae catalogued by William Herschel late in 1700s also are shown.

Johann Elert Bode provides an overview of his celestial maps and their use in the catalog’s preface, and presents the subject in the larger context of a sacred contemplation of wonders, (translated below from German).

“This work, which contains principally a complete catalog of the place occupied by all the fixed stars; double, nebulae, and clusters, which are indicated in my Uranography or Atlas of the Celestial Maps… is of an indispensable necessity for every astronomer, and may become very useful to lovers of high astronomy. It appears here, working with the greatest economy, on 24 sheets, after having cost me five years, and a lot of time and trouble. The whole reflection of the work is sacred to the friends of heaven, who consecrate their leisure to the contemplation of its wonders. I suppose that besides the possession of Uranography, they desire to be instructed in several points relating to the explanation and use of celestial maps, and to learn...the stars In the order of their different constellations.”

The German mathematician and astronomer Johann Elert Bode (1747—1826), was educated to become a merchant. During his youth, he developed an interest in mathematics, geography, and astronomy, and he built a telescope and observatory in the garret of his family’s home. In 1765, Johann Elert Bode was introduced to the mathematics professor, Johann Georg Busch (1728—1800), who gave Bode access to his library and instruments. Johann Elert Bode’s first publication, on solar eclipse of August 5, 1766, appeared when he was 19 years old. Johann Elert Bode also observed the transit of Venus June 3, 1769, and made an independent co-discovery of the comets of 1769 and 1770. He is best known for Bode’s law (Bode, 1772), or the Titius-Bode Law, an empirical law that determines planetary distances, originally found by J.D. Titius (1729—96). In 1787, Johann Elert Bode became Director of the Berlin Observatory, a post he held until 1825, one year before his death.