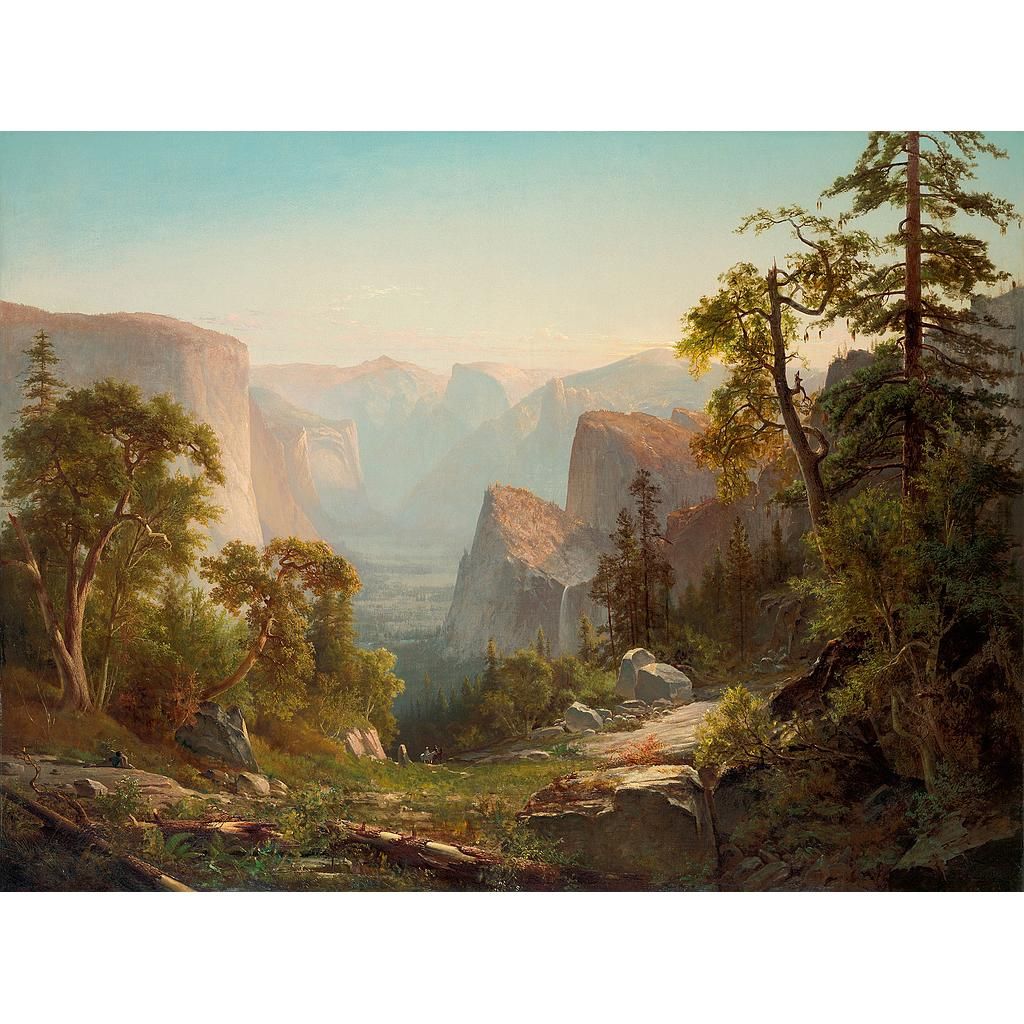 Enjoy significant savings on View of Yosemite Valley, by Thomas Hill, a limited-edition, museum-authorized print after the original painting in the New-York Historical collection.

Thomas HIll (1829–1908) is associated with the Hudson River School of Painting. During his career as an artist he painted monumental landscapes of the White Mountains in New Hampshire and the iconographic images of Yosemite and the American West celebrating America's wilderness. Hill painted View of Yosemite Valley in 1865 to commemorate President Abraham Lincoln's 1864 signing of an act to protect Yosemite Valley and the Mariposa Grove of Giant Sequoias.

In 1825, a young artist by the name of Thomas Cole traveled by steamboat on an excursion up the Hudson River. When he arrived back at the harbor in New York City, he carried with him sketchbook studies for landscape paintings that would change American art. These paintings, created from direct observations of nature, captured the stirring beauty of the Catskill Mountains and the Hudson Highlands. Thus was born the Hudson River School, a term coined about 1880 to refer to the loosely knit group of artists who, together with like-minded poets and writers, rose to prominence in New York during the early 19th century. Their mission was to create a self-consciously “"American” landscape vision and literary voice based on exploration of the natural world as a resource for spiritual renewal and as an expression of cultural and national identity. After 1850, Hudson River School artists also sought inspiration farther from home, portraying wilderness experiences in the West, the Arctic, and the Andes.

The school’s aesthetic celebrated a romantic vision of the pristine wilderness, capturing nature in its most glorious sunset light and serene moments. These paintings also introduce the human element into compositions that portray the domesticated landscape where man and nature exist in harmony. The artists of the Hudson River School were also among the key art world figures in antebellum New York who founded the National Academy of Design.

Hill's portrayal of the Yosemite Valley captures the awe that the early explorers and settlers experienced when they first witnessed the grandeur of the American west. This painting was borrowed from the museum by the White House as the back drop for President Obama's first inaugural address in 2008, but they had to return it when the address was over. We are pleased to offer the only available fine -art version of this remarkable painting that an individual can possess for their personal collection.

Oppenheimer Editions has created  a new print edition of these landscape paintings as they have never been seen before. This museum-authorized edition is limited to only 200 of each print. Every print is hand embossed with the New-York Historical Society logo and that of Oppenheimer Editions, the publisher, and also numbered and stamped with the signature of the president of the New-York Historical Society.