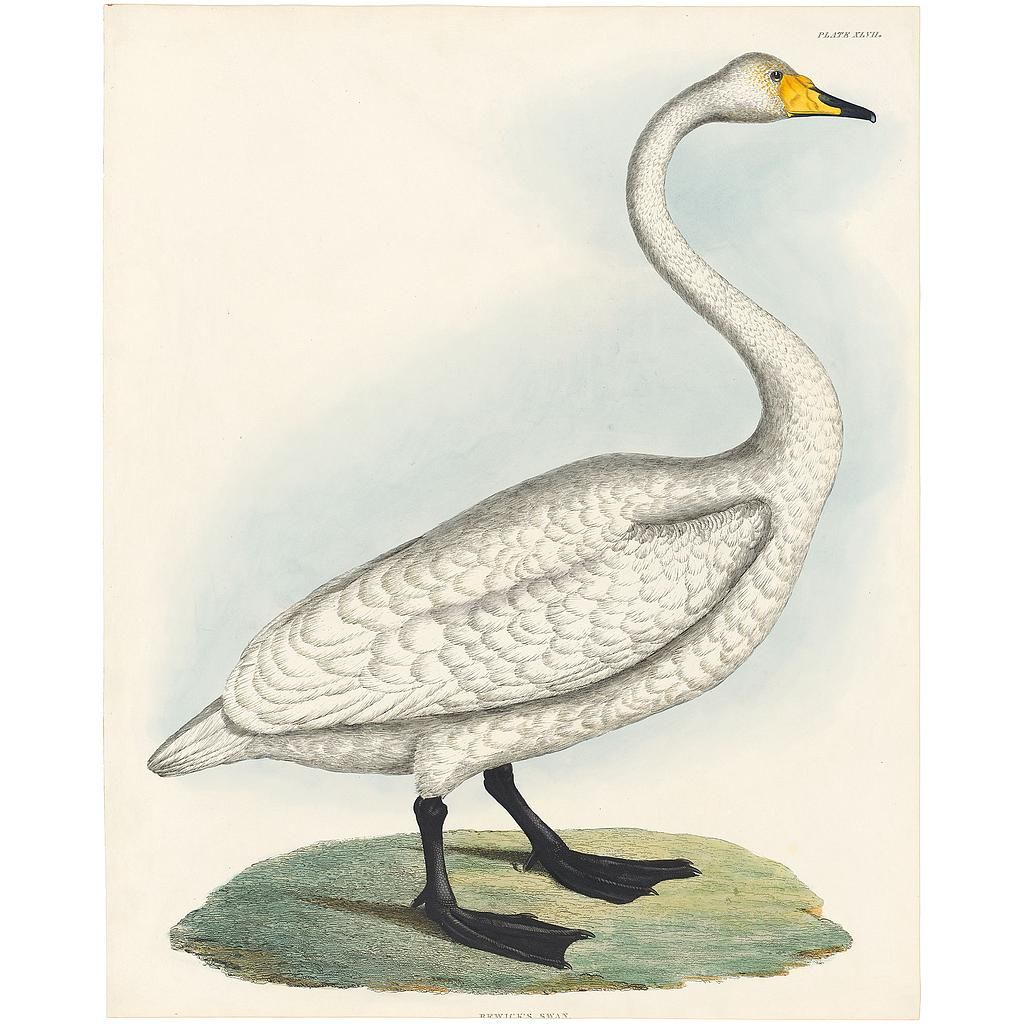 In the text, Selby notes “This recently discovered species, in size about one-third less than the Whistling Swan, is amongst our  British winter visitants; and though less numerous as a species than the other, is occasionally met with in England during every severe winter." He notes that the species was discovered in the winter of 1828-29 and the differences noted in the species attracted the attention of "other naturalists to investigate the subject, and Mr. Yarrell [William Yarrell 1784–1856], whose knowledge as an ornithologist, and whose discrimination as a comparative anatomist, stand deservedly high, soon discovered additional proofs..., and, at is suggestion, the appellation of Cyngus Bewickii was conferred upon the species."

The artist-naturalist Prideaux John Selby (1788 – 1867) was born in Northumberland, England to a prominent family. As a child, he exhibited a strong interest in ornithology, and by the time he was 12 or 13 years old he had composed his first illustrated notes on common British birds. At an early age, Selby became a member of the Wernerian Natural History Society in Edinburgh. Selby’s interests in natural history extended into forestry and entomology, but his devotion to the subject of ornithology was primary.

Selby’s large-scale engravings were the first work of British ornithology to depict many birds in the size of life. Comprising two volumes with a total of 222 engravings, Illustrations of British Ornithology was published in Edinburgh in 19 parts from 1821 to 1834. Created during the same period that Audubon was publishing the Birds of America, Both Audubon and Selby employed the Scottish engraver W. H. Lizars. A highly skilled engraver himself, Selby employed Lizars’ services only for printing and coloring his own exquisite copper plates. Copies vary, and depending on the folio 222 or 218 of the engravings were hand-colored, many by Daniel McNee.

Twenty-six of the plates were drawn by Selby’s brother-in-law, Admiral Mitford, and the rest were executed by Selby, who obtained most of the specimens for the drawings himself. Selby engravings are printed on elephant folio size Whatman paper that is watermarked with the date the paper was made. Audubon also used Whatman paper for the Havell edition of Birds of America.