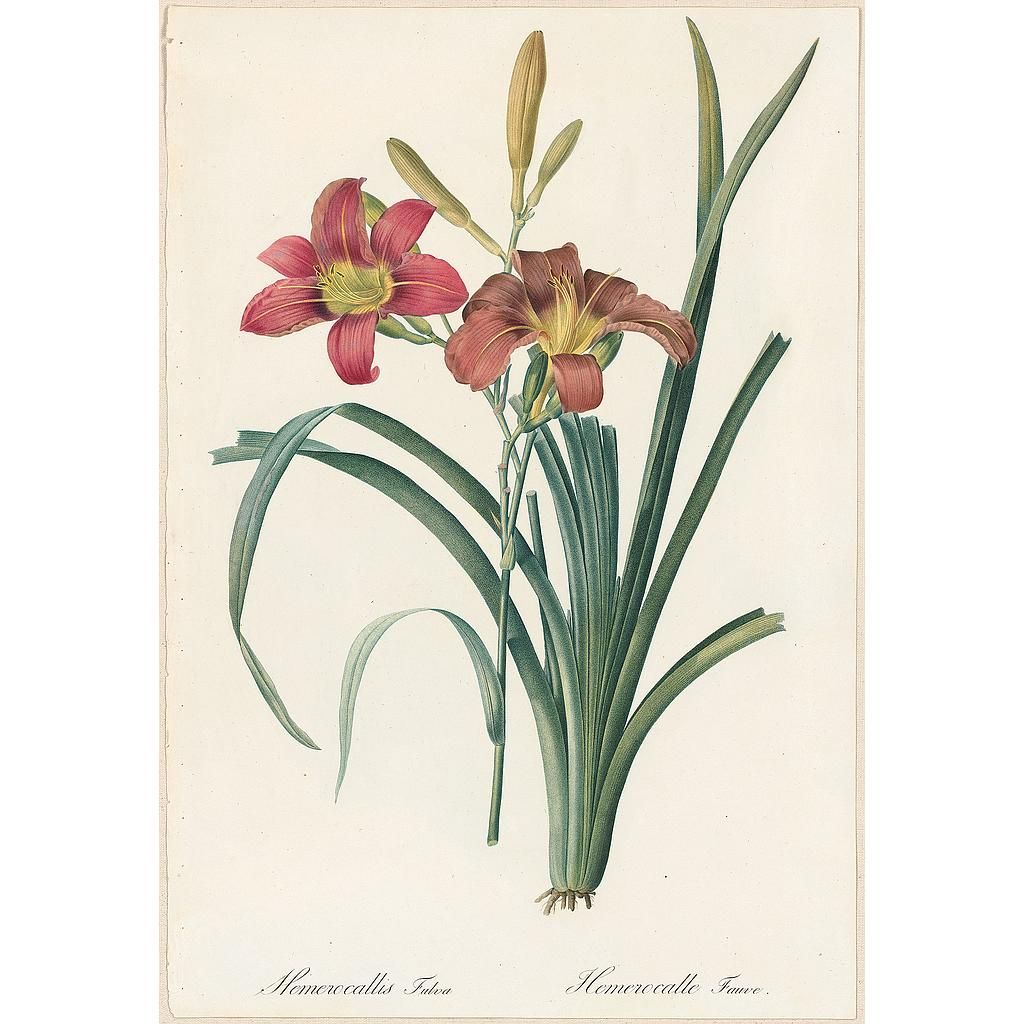 Enjoy significant savings on a superb hand-colored stipple engraving, Plate 16, Orange Day Lily, Hemerocallis fulva, Hemerocalle Fauve, from Pierre-Joseph Redouté’s renowned monograph, Les Liliacées (1802–16). Comprising 503 plates, Les Liliacées appeared in 80 parts from 1802 to 1816. Only 200 copies were produced. Josephine Bonaparte’s support made the work possible, herself ordering several sets.The flawless bone-white paper in this folio allows the brilliance of color and nuance of tonality to shine through. It is not possible to overstate the beauty of the plates in this folio.

Considered to be a French artist, Pierre-Joseph Redouté (1759–1840) was born in the village of Saint-Hubert, now a part of Belgium. The descendant of a long line of painters, he received his first training as an artist from his father, Charles Joseph Redouté (1715–76). At the age of 13, he left Saint-Hubert to make a living as an itinerant painter and decorator. During this period he studied the old masters, and in particular, was influenced by the work of the eighteenth-century Dutch flower painter, Jan van Huysum. In 1782, his elder brother, Antoine Ferdinand Redouté (1756–1809), a highly regarded decorative artist, invited him to join him in Paris as a stage-set designer. There, in his spare time, he began sketching rare plants at the Jardin du Roi (now the Muséum national d’Histoire naturelle). There, his artistic talent came to the attention of the Linnaean botanist Charles Louis L’Héritier and Gerard van Spaëndonck, Royal Professor of Painting, and they became Redouté’s mentors. Gerard van Spaëndonck developed the watercolor technique that Redouté later popularized.

On the eve of the French Revolution, Redouté was named to the position of Draftsman to the Cabinet of Marie Antoinette. Remarkably, he not only survived the Revolution, but attracted the patronage of Josephine Bonaparte in a seamless transition from the royal court to the French Republic. In 1798, Josephine Bonaparte acquired a grand estate, Malmaison, and began to fill its gardens with the rarest plants that the old and new worlds could furnish. Redouté flourished under Josephine’s reign, publishing during this period the monumental Les Liliacées (1802–16), naming the most dramatic plate after his benefactress, the “Amaryllis Josephinae“. Napoleon divorced Josephine in 1809, and she died in 1814. In the absence of Josephine’s patronage, Redouté’s fortunes began to decline. Somewhat impoverished, he died in 1840, suffering a stroke.