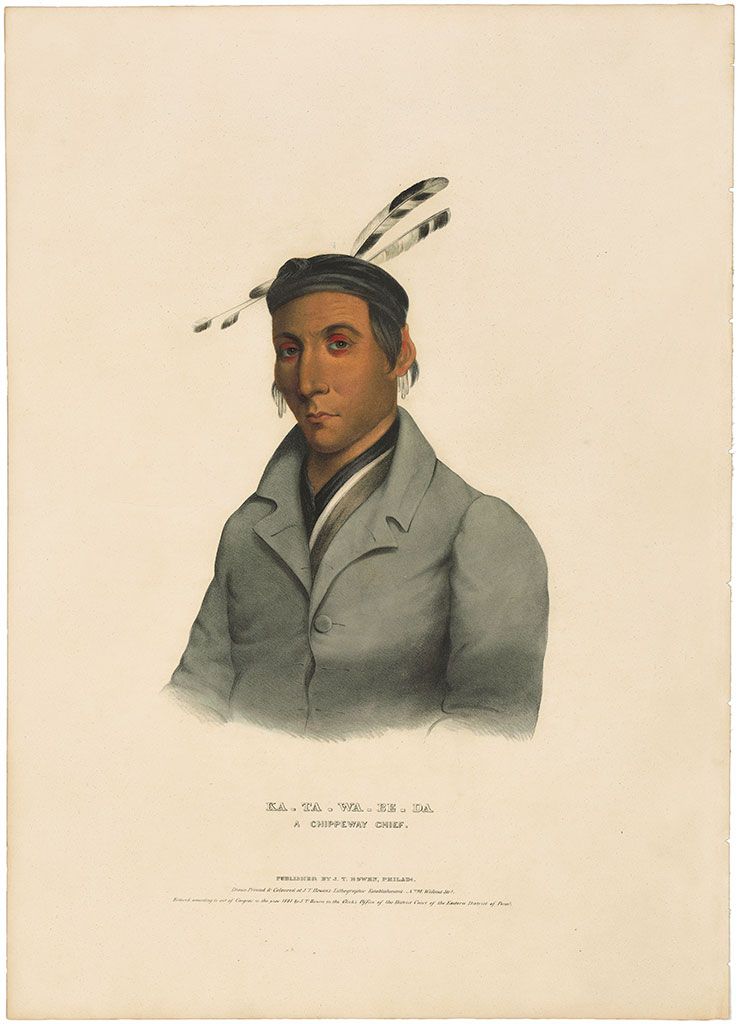 Enjoy special savings on a richly hand-colored lithograph from the McKenney Hall Indian Gallery portfolio, Plate 82 Ka-ta-wa-be-da, or "Broken Tooth”, a Chippeway chief. In the accompanying text, James Hall provides insights on this influential chief's skills as an orator  and remarkable character.

"The chief, whose portrait is before us, deserves honorable mention as one of the very few of his race who condemned, by precept and example, the vindictive and bloody wars...among the ill-starred aborigines. ...[H]e never took an active part in war, but discouraged it on all occasions, as far as his situation and influence allowed. At the councils, in which he was an able speaker, he was a prominent person, he usually harangued in favor of pacific measures, recommended negotiation and remonstrance, rather than revenge and violence, and sought to allay the excitement which ordinarily prevails at the meetings of the antagonist and turbulent denizens of the wild.

"Ka-ta-wa-be-da was an orator of no small repute. Expert and ready in debate, his speeches were marked by shrewdness, ingenuity, and subtlety of argument, and by a simple brevity and force of expression. ...He was the principal village chief, the civil head, as distinguished from the war chief, or military leader of a band of the Chippeway nation, who reside at Sandy Lake, or Kometongogogmog, among the head springs of of the Mississippi, and was a sensible, prudent politic man, who was revered by his own people, and looked up to as a safe counselor by the surrounding villages"

Reference: McKenny, Thomas & Hall, James & Todd, Hatherly & Todd, Joseph.History of the Indian tribes of North America: with biographical sketches and anecdotes of the principal chiefs. Embellished with one hundred portraits from the Indian Gallery in the War Department at Washington. Philadelphia: D. Rice & Co. 1872.