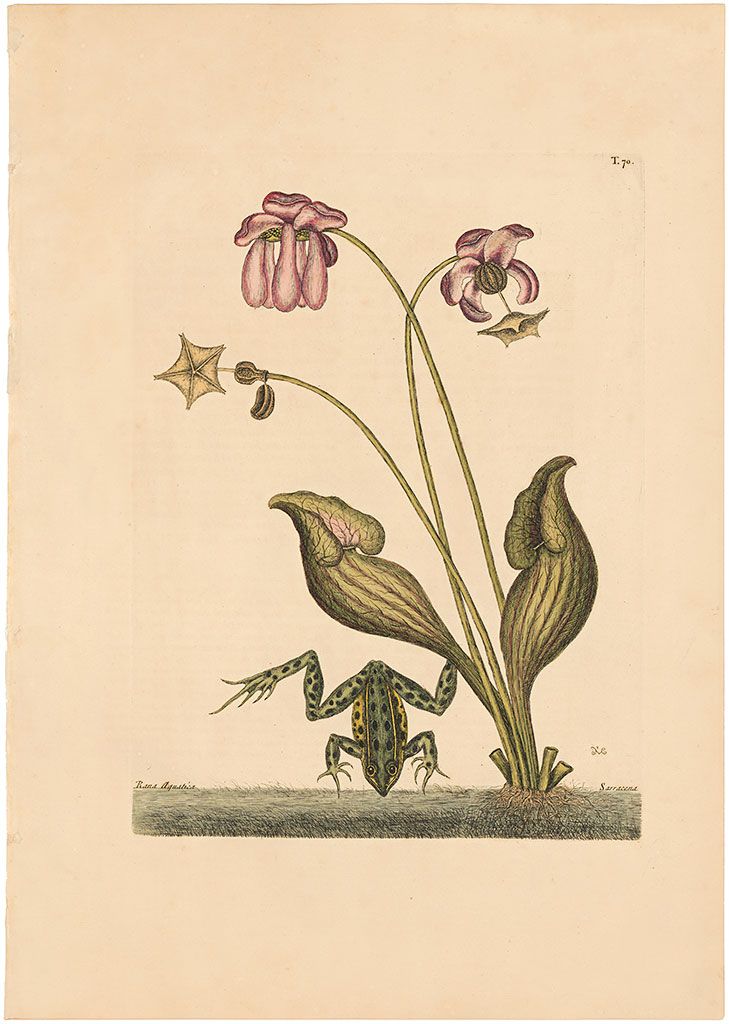 Acquire a rare original Catesby engraving, Pl. 70 The Water Frog, from Volume 2 of The Natural History, available at a special price this week only. The first illustrated work of American flora and fauna to depict the entire spectrum of life forms, Catesby’s The Natural History of Carolina, Florida and The Bahama Islands stands as a monument in American science and natural history art. Catesby depicted a water frog (current name, southern leopard frog, Lithobates sphenocephalus) beside a Sarracena plant, currently known as the purple pitcherplant, Sarracenia purpureae. Catesby depicted the water frog with the pitcherplant because he determined a unique association between the water frog's insect prey and the leaves of this plant, which "always retain some Water, and seem to serve as an Asylum or secure Retreat for numerous Insects from Frogs and other Animals, which feed on them," as described in his text for this plate below.

These Frogs are of various Sizes, tho' commonly about the Bigness of the Figure Their Limbs are very long; the Upper-part of the Head, Body, and Limbs dusky Green, spotted with Black: From the Eyes to the Rump extends two yellow Lines; two white Lines also reach from each Eye to the Nose The Eyes are large, black, and circled with Yellow Irides. These are not seen on dry Land, they frequent Rivulets and Ditches of Water, and will leap at once five or six Yards.

The Leaves of this, like the preceedent, spring from a fiberous Root, to the Height of six or eight Inches, they are likewise hollow, swelling and more protuberant than the former, and differently shaped, as in the Figure; they are of a yellow green Colour, striped and veined with Purple. The Flowers of this Plant rise considerably higher than the Leaves, and are of a purple Colour, except which the Flowers and Seed Vessels of this and the preceedent are formed alike. The Hollow of these Leaves, as well as of the other Kind, always retain some Water, and seem to serve as an Asylum or secure Retreat for numerous Insects from Frogs and other Animals, which feed on them.

These Plants grow usually in the same Places with the foregoing.