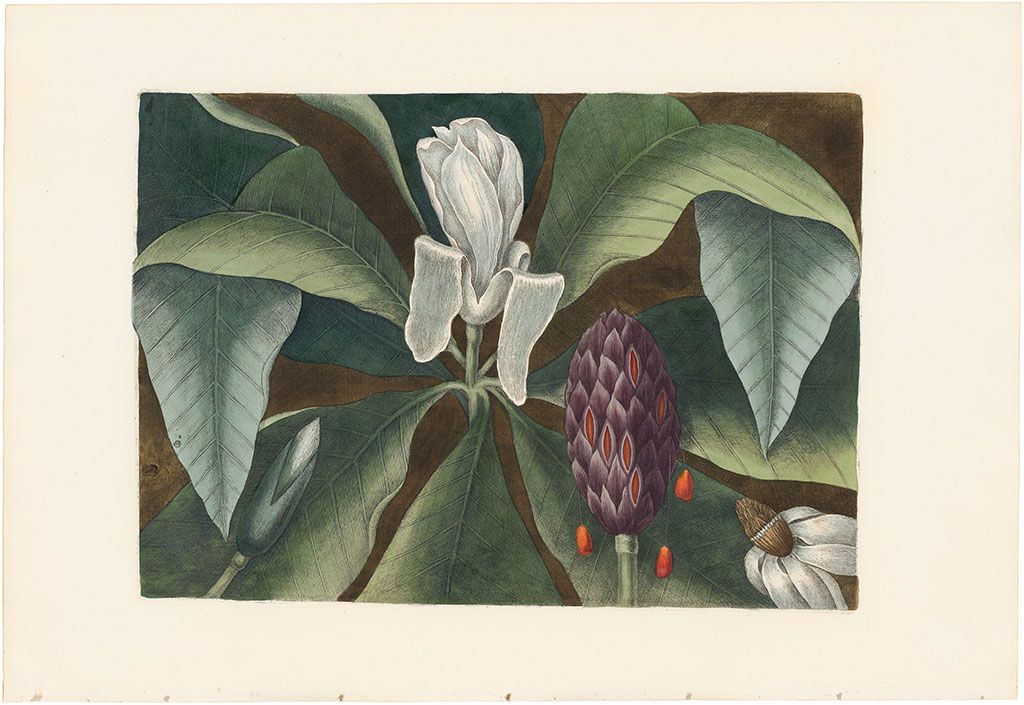 "These Trees are from sixteen to twenty Feet in Height, with a Trunc seldom above five Inches thick, the Bark of which is white, the Wood soft and spongy, the Leaves are usually thirty Inches in Length, and about five broad at the widest Part, they grow in horizontal Circles, representing somewhat the Appearance of an Umbrella. From the middle of one of there Circles of Leaves rises the Flower, which is white, composed of ten or eleven Petals, the three outermost of which are of a pale Green, and before the Blossom opens, encloses the rest of the Petals, and when the Flower is full blown, they hang in the Manner here represented. The Structure of the Ovarium, Seed Vessel, &c. so nearly resembles those Parts of the Magnolia altissima, that I conceive the Figures as they are here exhibited, without any farther Description, will give a sufficient Idea of them.

In Virginia I have never seen above two or three of these Trees, which grow at one Place; in Carolina they are more frequent, and grow in rich Land. They drop their Leaves at the Approach of Winter."

"This Plant grows about a Foot and half high; the Flower consisting of several Petala, with many yellow Stamina sourrunding the seed-vessel, which is oval, unicapsular, and contains many roundish Seeds. The Leaves of the Plant resemble the Aconitum lycoctonum luteum C.B. Pin. The Root is said to be an excellent Emetic, and is used as such in Carolina; which has given it there the Name of Ipecacuana, the stringy Roots of which it resembles. It flowers in March; the Fruit is ripe in May; which has occasioned it in Virginia to be called May-Apple."