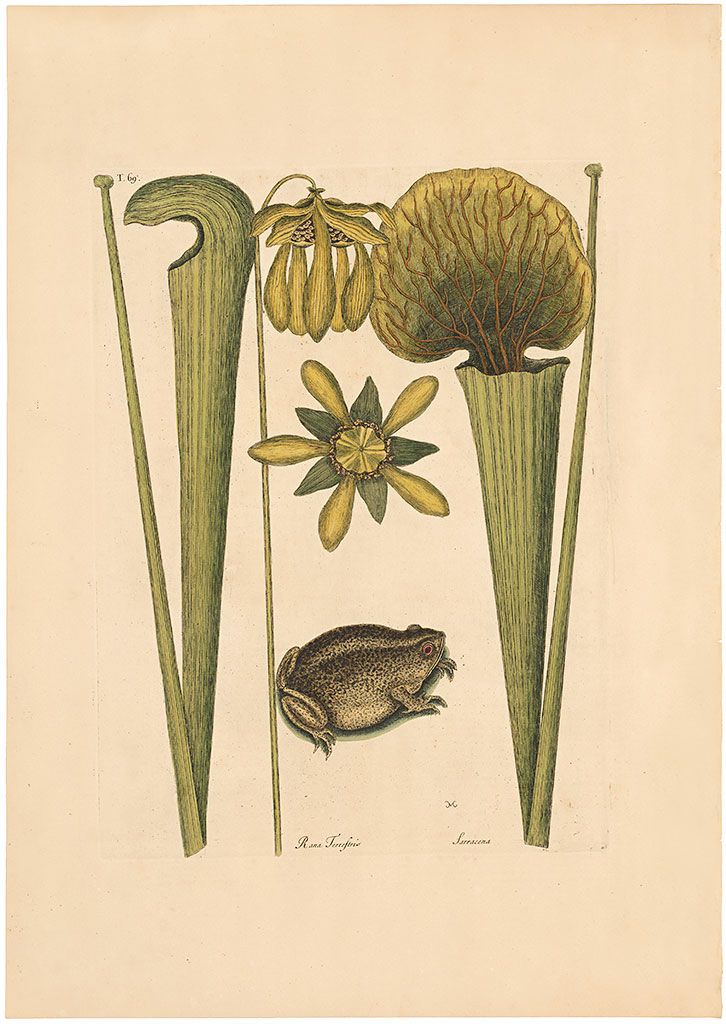 Acquire a superb hand-colored engraving by Mark Catesby, Pl. 69 The Land Frog, Rana terrestris, from The Natural History of Carolina, Florida and the Bahama Island, available this week only at a special price. In 1754, five years after Catesby's death, a second edition of his Natural History was revised and printed in London by the ornithologist and natural history painter George Edwards (1694–1773). Printed from Catesby's original copper plates, the 1754 edition is generally more colorful than the first edition.

The symmetry of this composition is particularly engaging in a way that speaks to Catesby's innate sense of design within the context of creating a visually accurate record of his subject. Here he depicted two species of pitcherplants together with a frog he calls the Land Frog. The frog is framed by two nearly parallel, yet distinct species of pitcherplants. His juxtaposition of the linearly ribbed leaves and stems of the pitcherplants with his handling of the curved forms of the flower parts and frog, sets up a wonderful rhythm. In this counterpoint, the elegant linear and curved forms painted in a limited color palette produce a cohesively graphic and harmonious composition.

Below is Catesby's text entry for this plate.

The Back and Upper-part of this Frog is gray, and thick spotted with dark brown Spots; the Belly dusky white, and faintly spotted: The Irides of the Eyes. They vary somewhat in Colour, some being more gray, others inclining to brown: Their Bodies are large, resembling more a Toad than a Frog, yet they do not crawl as Toads do, but leap; they are seen most in wet Weather, yet are very frequent in the higher Lands, and appear in the hottest time of the Day: They feed on Insects, particularly of one Kind, which the following Accident seems to confirm. As I was sitting in a sultry Evening, with some Company without Doors, one of us let fall from a Pipe of Tobacco some light burning Ashes, which was immediately catched up and swallowed by a Frog of this Kind. This put us upon tempting him with a red hot Wood Coal, not less than the End of ones Finger, which he also swallowed greedily; thus afterwards always found one or other of them cagily deceived in this Manner, as I imagine, by taking it to be a Cicindela, or FireFly, which in hot Nights are very numerous in Virginia and Carolina, where also these Frogs abound.

As this and the following Plate exhibit two Plants of the same Genus, and which in many Parts of their Structure agree with the Description of each other, I found it necessary to refer from one to the other in order to explain some Parts, which are not alike displayed in both Plates, and consequently cannot give so perfect Idea without such reference.

The Leaves of this Plant are tubelous, and ribbed, arising from a knotty fiberous Root, to the Height of about three Feet; they are small at the Root, widening gradually to the Mouth of the Tube, which in young Leaves are closed, but open by Degrees, as the Leaf increaseth, and when near its full Growth arches over the Mouth of the Tube, in Form of a Fryar's Cowl, Fig. 1. This Cowl expands itself till the Leaf is at full Bigness, having its Inside of a greenish Yellow, veined with Purple, Fig. 2. yet retaining somwhat the Position it first had, by hanging over the Mouth of the Tube, which otherwise would be filled with Rain, and fall by the Weight of Water, it being of a thin Substance, and of a yellowish green Colour; The Flowers, which hang inclining, grow each on a single Foot-stalk, of between two and three Feet high, springing from the Root, in like Manner with the Leaves. While the Flower is in bloom, many small yellow Apices, hanging by Threads, surround the Ovarium, to which is fixed by a Stylus, a pentagonal thin Membrane, in Form of a Shield, hanging horizontally; between the Intercesses of which hang five thin Petals, growing from the Basis of the Ovarium: On the Top is placed the Calyx divided into five Sections, and compleats the whole Flower, which remains not long in this perfect State, for the five Petals, after continuing a Day or two, fall off, leaving the Remains of the Flower, which continue several Months in the State and Form represented in the next Plate, Fig. 3. The Capsula or Seed Vessel incloses a Core, from which it separates when the Seeds are ripe, and divides into five Parts, each of which is again divided by a thin Membrane, by which ten Cells are formed, in which the Seeds lie: Fig. 4. shews the under Part of the Flower, as it appears when spread open, with the Shield reflected, resembling somewhat the Seat of a Side Saddle, from which in Virginia it has received its Name of Side-Saddle Flower. These Plants grow in Bogs and watery Places in Carolina, Virginia, Maryland and Pensylvania.

A naturalist-explorer and self-taught artist who executed almost every aspect of this historic work, Mark Catesby (1683–1749) possessed a unique combination of talents. To publish his work, he learned the complicated process of etching from the print maker Joseph Goupy. From 1731 to 1747, The Natural History was published in two volumes in five parts comprising a total of 200 plates. The Appendix, which was compiled from specimens available in England, added 20 more. The artist George Edwards revised and re-issued both volumes from 1748 to 1756, and in 1771 the publisher Benjamin White reissued the Edwards version adding Linnaean names to all of Catesby’s plants and animals. All editions have the same number of plates.

Born in Castle Hedingham, Essex, England, to John Catesby, a lawyer, and Elizabeth Jekyll, the daughter of a prominent family, Catesby’s interest in the natural world began in childhood, when as a boy he was introduced to the renowned naturalist John Ray, who lived nearby and became an early influence. Mark Catesby traveled from England to the new world on a legendary discovery expedition a century before Audubon first published his work. In the preface in Volume I, he explains the forces that motivated him: