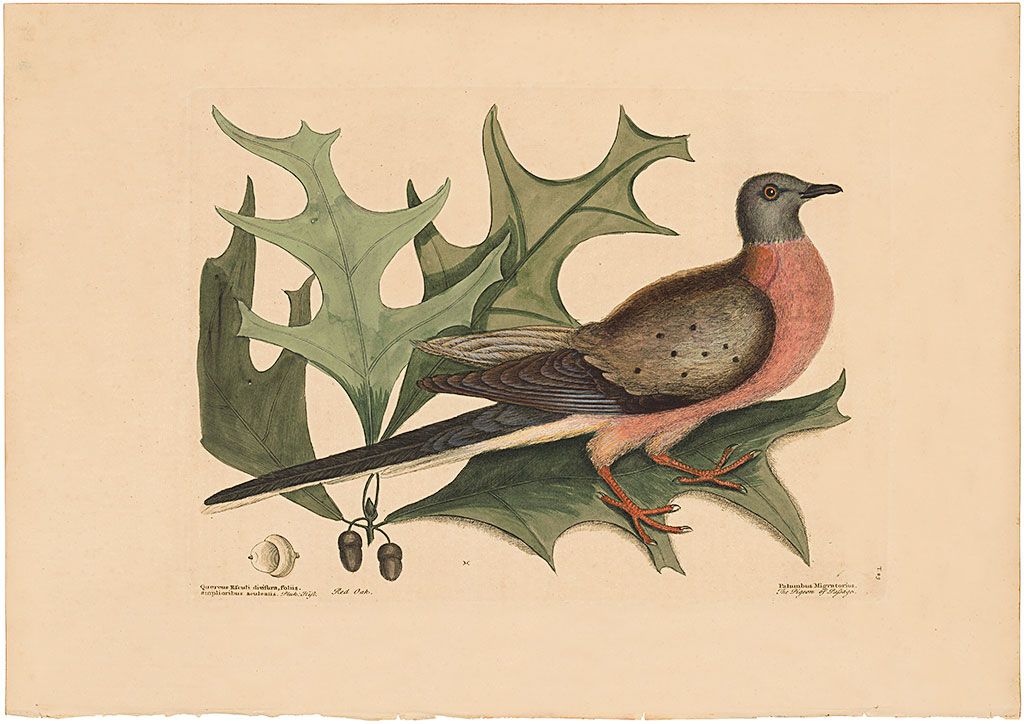 Mark Catesby, Pl. 23 The Pigeon of Passage, The Natural History of Carolina, Florida and the Bahama Islands, 1754, hand-colored engraving

Acquire a rare original Catesby engraving, Pl. 23 The Pigeon of Passage, from Volume I of The Natural History, available this week only at a special price The first illustrated work of American flora and fauna to depict the entire spectrum of life forms, Catesby’s The Natural History of Carolina, Florida and The Bahama Islands stands as a monument in American science and natural history art. Catesby's elegant and refined composition shows the Passenger with the leaves and acorns of the Red Oak, a favorite roosting place and source of food, as described below in his text for this plate.

Palumbus Migratorius: The Pigeon of Passage.

It is about the size of our English Wood-Pigeon; the Bill black; the iris of the Eye red; the Head dusky blew; the breast and belly faint red. Above the shoulder of the Wing is a patch of feathers that shines like Gold; the wing colour'd like the head, having some few spots of black, (except that the larger feathers of it are dark brown) with some white on their exterior vanes. The Tail is very long, covered with a black Feather; under w[h]ich the rest are white; the Legs and Feet red.

Of these there come in Winter to Virginia and Carolina, from the North, incredible Numbers; insomuch that in some places where they roost (which they do on one another's Backs) they often break down the limbs of Oaks with their weight, and leave their Dung some Inches thick under the Trees they roost on. Where they light, they so effectually clear the Woods of Acorns and other Mast, that the Hogs that come after them, to the detriment of the Planters, fare very poorly. In Virginia I have seen them fly in such continued trains three days successively, that there was not the least interval in losing sight of them, but that some where or other in the Air they were to be seen continuing their flight South. In mild Winters there are few or none to be seen. A hard Winter drives them South for the greater plenty and variety of Mast, Berries, &c. which they are deprived of in the North by continual Frost and Snow.

In their passage the People of New York and Philadelphia shoot many of them as they fly, from their Balconies and Tops of Houses; and in New England there are such Numbers, that with long Poles they knock them down from their Roosts in the Night in great numbers. The only information I have had from whence they come, and their places of breeding, was from a Canada Indian, who told me he had seen them make their Nests in Rocks by the sides of Rivers and Lakes far North of the River St. Lawrence, where he said he shot them. It is remarkable that none are ever seen to return, at least this way, and what other Rout they may take is unknown.

The Leaves of this Oak retain no certain form; but sport into various shapes more than other Oaks do. The Bark is dark colour'd, very thick and strong, and for tanning preferable to any other kind of Oak; the grain is course, the wood spongy, and not durable. They grow on high land: the Acorns vary in shape, as appears by the figures of them; they being from the ame kind of oak.