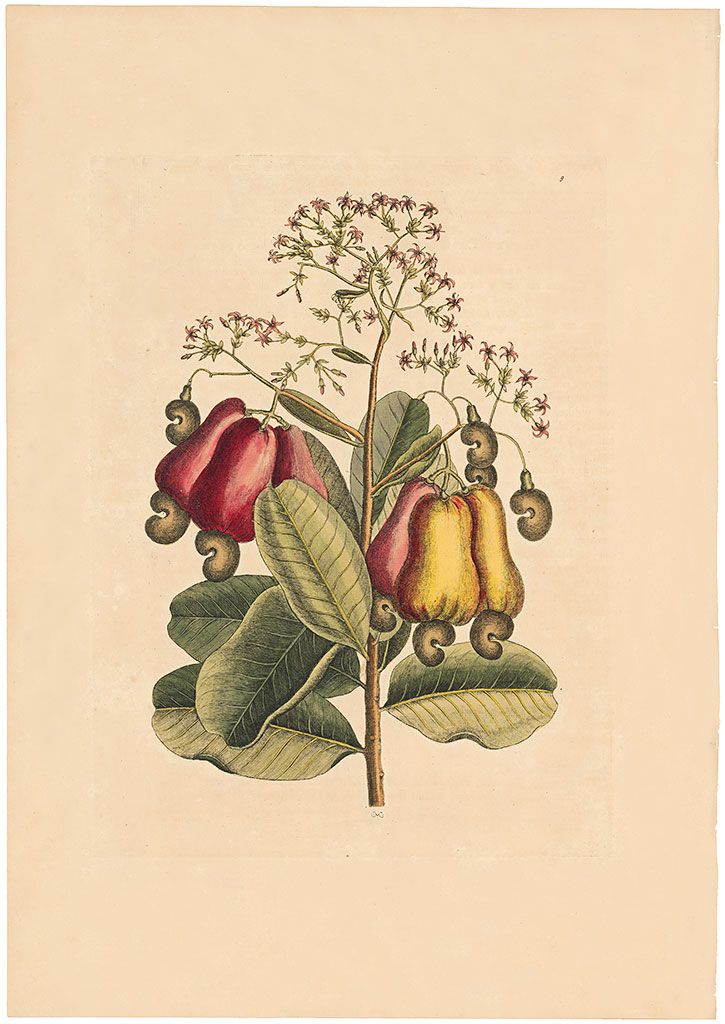 Acquire a superb original Catesby engraving at a special price, Appendix Pl. 9 The Cushew Tree, (title in text) from The Natural History of Carolina, Florida and The Bahama Islands, Appendix. The current name for this species of tree is cashew tree, Anacardium occidentale (Linn.). The first illustrated work of American flora and fauna to depict the entire spectrum of life forms, Catesby’s Natural History stands today as a monument in American science and natural history art.

In the accompanying text, Catesby provides detailed observations of the cashew tree's exotic appearance, as well as a comment on the inaccuracy of Maria Sybilla Merian's earlier depiction of it:

The trunks of some of these trees are a foot and a half thick, and about twenty feet in height, forming a regular-headed handsome tree, with oval leaves. The flowers grow at the ends of the branches in clusters: each flower is composed of a green calix, and five small narrow petals of a purple colour and fragrant smell; and is succeeded by a nut not unlike, in form and colour, to a Hare's kidney, of a shining brown colour, containing a kernel resembling an Almond in size and taste. The shell inclosing this kernel is double, and contains an acrimonious caustik inflammable oil. The nut appears next to the flower, and grows almost to its full size before the fruit shews itself, which at length appears between the footstalk and the nut; and not as Madame Merian has unluckily figured hers, placing the fruit at the end, and the nut joining to the stalk instead of the fruit. the fruit, when full grown, resembles somewhat a Catharine pear; having a smooth skin and a yellow or red colour, sometimes blended with both clours, hanging three to four to a cluster. this fruit consists of a fibrous, spongy substance, which in eating is to be sucked, but not swallowed, and yields a pleasant-tasted vinous juice, somewhat astringent, but esteemed very wholesome.

They grow in Jamaica, Hispaniola, and many other places of America, within the Tropicks.