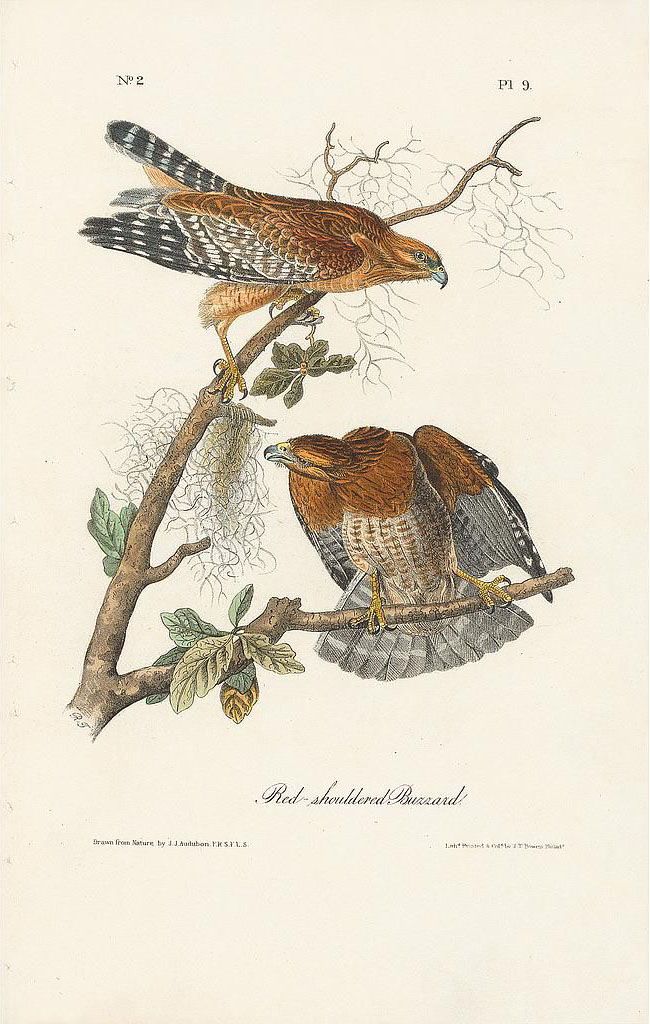 Acquire a superb first edition Audubon octavo print from the Birds of America, Plate 9, Red-shouldered Buzzard, Falco lineatus, Gmeliin, at a special discount from our already low prices. Audubon's masterful and iconic composition depicts a pair of red-shouldered hawks. The female is above and the male below in a white oak with Spanish moss. The current name for this species is Red-shouldered Hawk, Buteo lineatus.

In this excerpt from the Ornithological Biography or account of the habits of birds of the United States of America, Audubon remarks upon the necessity of observing nature in the field, and gives an account of this species' habits:

Although we are informed that a skin of this species has long ago been described in Europe, we are, in the same breath, told that nothing is known of the life and habits of the individual on the body of which it once shone in all its native glossiness. Nothing, kind reader:—the tarnished coat only has been transmitted abroad; and, like that belonging to many equally interesting species of the feathered tribe, has been exposed for sale in distant markets, where the purchaser has felt as little concern about the life of the individual to which it belonged, as purchasers of another kind usually feel about the former owners of the thread-bare vestments which we see offered for sale by the old-clothes'-men of St Giles's. Even Mr Alexander Wilson himself, knew nothing respecting the habits of this species; and as other authors, ranking equally high with that pleasing writer, have unwittingly confounded it with another species, known in the United States by the name of the Winter Hawk, it is with satisfaction that I find myself in some degree qualified to give an account of the differences of habit between the two species.

...At the approach of spring, this species begins to pair, and its flight is accompanied with many circlings and zigzag motions, during which it emits its shrill cries. The male is particularly noisy at this time. He gives chase to all other Hawks, returns to the branch on which its mate has chanced to perch, and caresses her. This happens about the beginning of March. The spot adapted for a nest is already fixed upon, and the fabric is half finished. The top of a tall tree appears to be preferred by this Hawk, as I have found its nest more commonly placed there, not far from the edges of woods bordering plantations. The nest is seated in the forks of a large branch, towards its extremity, and is as bulky as that of the Common Crow. It is formed externally of dry sticks and Spanish moss, and is lined with withered grass and fibrous roots of different sorts, arranged in a circular manner. The female usually lays four eggs, sometimes five. They are of a broad oval form, granulated all over, pale blue, faintly blotched with brownish-red at the smaller end.

References:John J. Audubon, Ornithological Biography, or an account of the habits of the Birds of the United States, Adam Black, Edinburgh, 1831, 296–297.