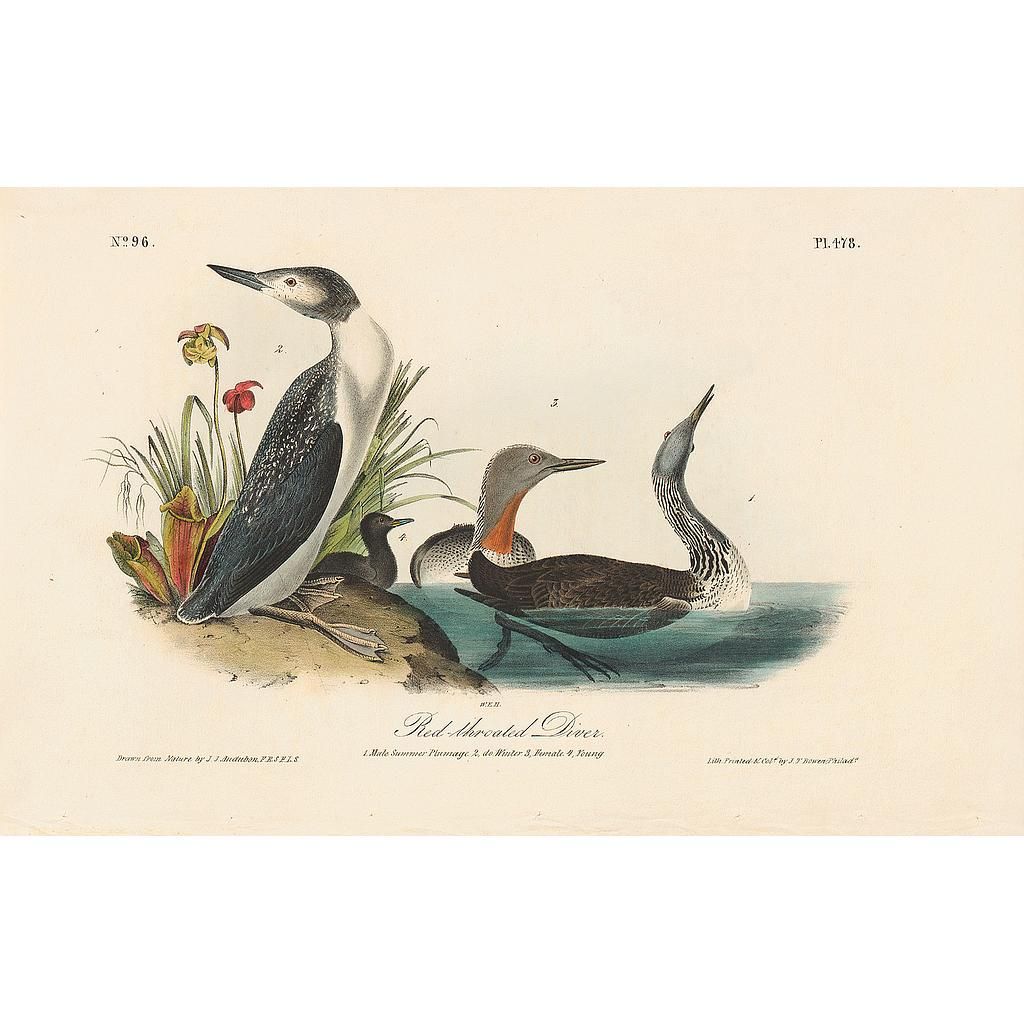 Acquire a superb first edition Audubon octavo print from the Birds of America, Plate 478, Red-throated Diver, Colymbus septentrionalis, Linn.. after John James Audubon, at a special discount from our already low prices. The current name is Red-throated Loon, Gavia stellata, Pontoppidan, 1763. Audubon drew the mated pair in the water (the male second from the right and female to the far right) in summer or breeding plumage and their offspring while he was  on an expedition to Labrador in 1833. The male bird standing on the ground on the far left side is shown in winter plumage and was probably added when Audubon was in Boston later that year. This elegant composition represents each bird in the group with characteristic grace of form. The contrasting elements of the transparency of the water revealing the the bird's webbed feet as they would be seen beneath the water, as opposed to how they appear dry on a rock on land on the left, and the decorative addition of native flora, including the pitcher plant on the left, all work to draw the viewer's eye into this beautiful bird's habitat.

In the the Ornithological Biography, Audubon poetically describes finding the red-throated diver.

The middle of May has arrived; our woods are once more filled with the melodies of numberless warblers, and the Divers have ceased to be seen on our eastern coasts. To study their habits at this season, we must follow them to the islands in the mouth of the broad St. Lawrence, or to the granitic rocks of Labrador. The voyage cannot be performed without great expense, and may be attended with danger, but enthusiasm urges me on, and now my bark skims over the blue waters. At length arrived on the rocky shores, I prepare to visit the interior of that rude and moss-clad region. Thousands of little lakes are seen, on which are numberless islets richly clad with grass and sedge, the whole of which seems as if it had grown in a day, so tender are the fresh blades, and so pure their light green tint. High over these waters, the produce of the melted snows, the Red-throated Diver is seen gambolling by the side of his mate. The males emit their love-notes, and, with necks gracefully curved downwards, speed by the females, saluting them with mellow tones as they pass. In broad circles they wheel their giddy flight, and now, with fantastic glidings and curves, they dive towards the spot of their choice. Alighted on the water, how gracefully they swim, how sportively they beat it with their strong pinions, how quickly they plunge and rise again, and how joyously do they manifest to each other the depth and intensity of their affection! Now with erected neck and body deeply immersed they swim side by side. Reynard they perceive cunningly advancing at a distance; but they are too vigilant for him, and down like a flash they go, nor rise again until far beyond his reach. Methinks I see them curiously concealed among the rank weeds under the bank of their own islet, their bills alone raised above the water, and there will they remain for an hour, rather than shew themselves to their insidious enemy, who, disappointed, leaves them to pursue their avocations.

Lithographed, printed, and colored by J. T. Bowen in Philadelphia. The initials "W.E.H." that appear above the title in the center of the plate refer to William E. Hitchcock (1822–1906), a Philadelphia lithographic artist who worked for Bowen. This beautifully hand-colored royal octavo lithograph includes an archival mat. In perfect condition, 6.5 x 10.125 inches.

References: An Index and Guide to Audubon's Birds of America, Susanne M. Low, 1988, page 103; Ornithological Biography or and account of the United States of America accompanied by descriptions of the objects represented in the work entitled The Birds of America, John J. Audubon, Volume VII, 1844, page 299; The Original Watercolor Paintings by John James Audubon for the Birds of America, Vol. 2, Plate 132, American Heritage Publishing Co., 1966.