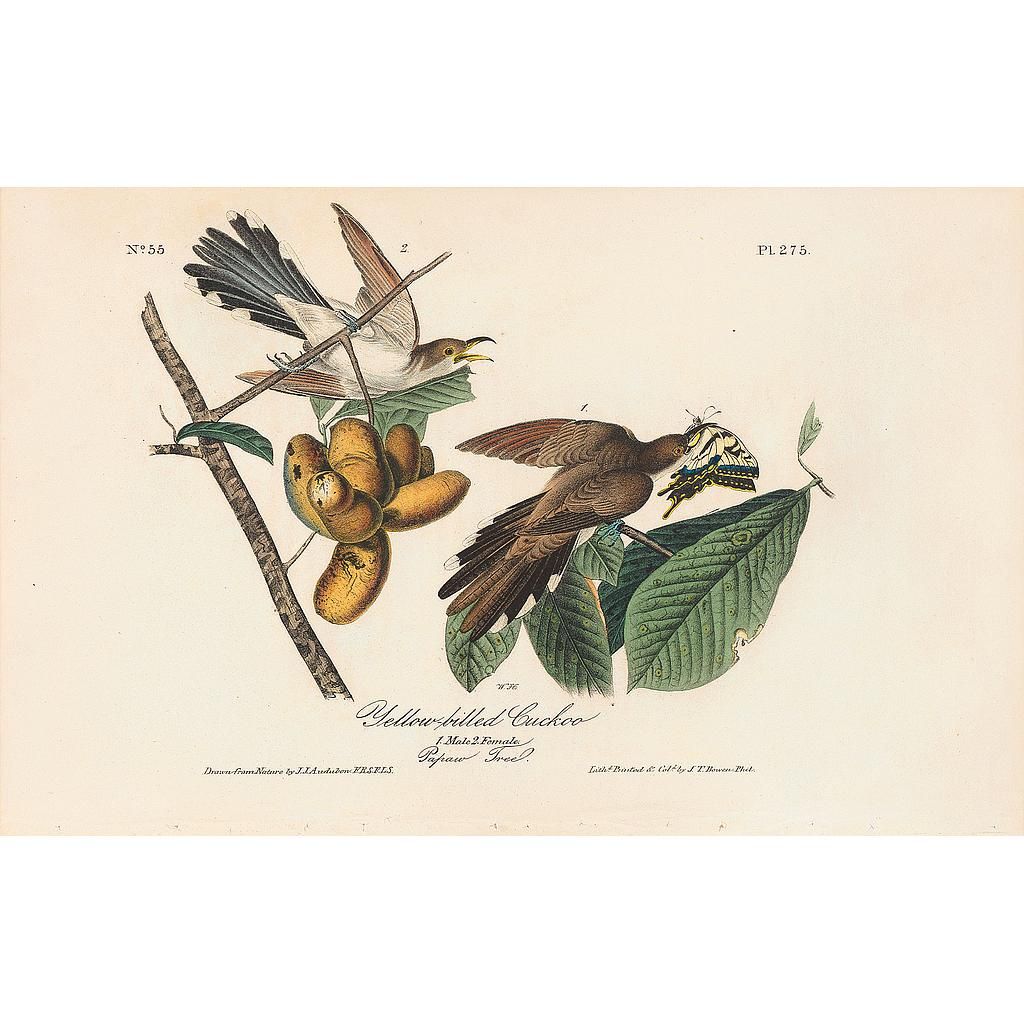 Acquire a superb first edition Audubon octavo print from the Birds of America, Plate 275, Yellow-billed Cuckoo, Coccytus americanus, Linn. after John James Audubon, at a special discount from our already low prices. Audubon's wonderfully animated composition fully realizes the grace and drama of nature. He depicted a male and female yellow-billed cuckoo in a pawpaw tree, Porcelia triloba. Audubon probably painted the original watercolor for this print in 1821 or 1822. It has been suggested that the bird on the right with the tiger swallowtail may have been an inspired decorative addition, since the yellow-billed cuckoo feeds almost exclusively on caterpillars. Also, it is likely that Joseph Mason, Audubon's young assistant at the time, painted the leaves and fruit of the pawpaw tree.*

Among the many interesting subjects Audubon addresses in his entry for the yellow-billed cuckoo are the birds' range and the pawpaw tree, which he chose as the botanical setting for this plate.

I found the Yellow-billed Cuckoo plentiful and breeding in the Texas; and it is met with, on the other hand, in Nova Scotia, and even in Labrador, where I saw a few. It has been observed on the Columbia river by Mr. TOWNSEND. No mention is made of it in the Fauna Boreali-Americana. Many spend the winter in the most southern portions of the Floridas....

The branch, among the foliage of which you see the male and female winging their way, is one of the papaw, a tree of small size, seldom more than from twenty to thirty feet in height, with a diameter of from three to seven inches. It is found growing in all rich grounds, to which it is peculiar, from the southern line of our States to central Pennsylvania, seldom farther eastward, here and there only along the alluvial shores of the Ohio and Mississippi. In all other places of like nature you may meet with groves of papaw trees, covering an acre or more of ground. The fruit, which is represented in the plate, consists of a pulpy and insipid substance, within which are found several large, hard, and glossy seeds. The rind is extremely thin. The wood is light, soft, brittle, and almost useless. The bark, which is smooth, may be torn off from the foot of the tree to the very top, and is frequently used for malting ropes, after it has been steeped in water sufficiently to detach the outer part, when the fibres are obtained, which, when twisted, are found to be nearly as tough and durable as hemp. The numerous islands of the Ohio and all the other western rivers are generally well stocked with this tree.

Reference: An Index and Guide to Audubon's Birds of America, Susanne M. Low, 1988, page 36; The Birds of America from Drawings Made in the United States and Their Territories, John J. Audubon, Volume IV, 1842, pages 296–297; *The Original Water-color Paintings by John James Audubon for the Birds of America, Introduction by Marshall B. Davidson, 1966,  Vol. 1, plate 22.