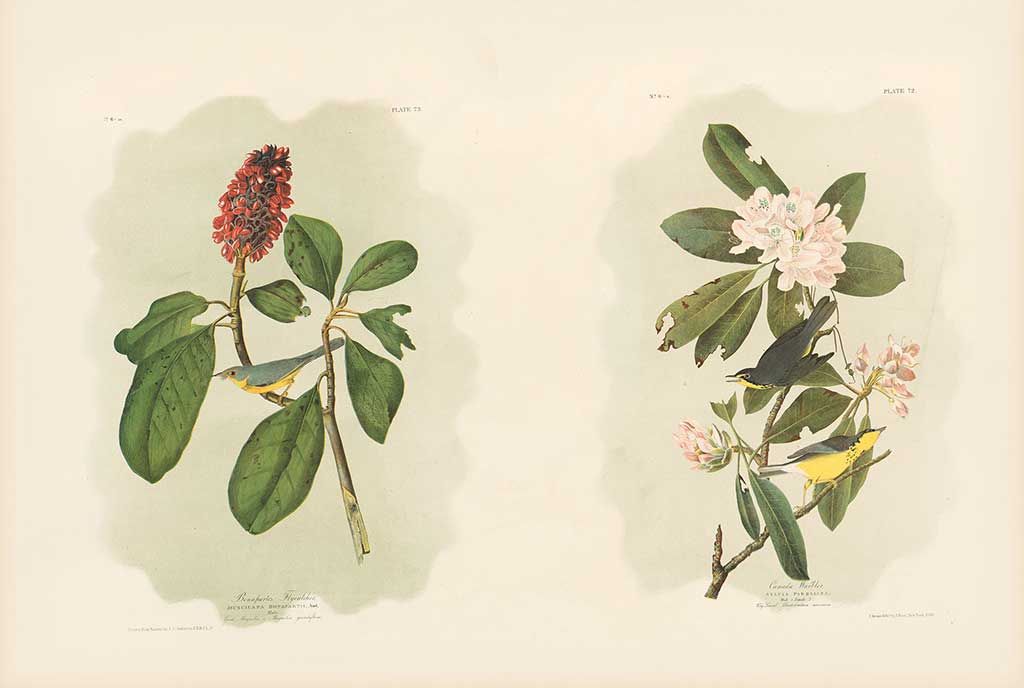 Acquire one of the most beautiful double plates from the Bien edition of John J. Audubon's Birds of America, Pl. 72 Canada Warbler & Pl 73 Bonaparte's Flycatcher, offered this week only at a special price. Forty-five of 105 plates in the Bien edition are double plates representing 90 smaller species that are primarily song and shore birds.

In Plate 73, Audubon misidentified an immature Canada Warbler as a new species, naming it Bonaparte's Flycatcher, Musicapa bonapartii, Aud. ( left). In this plate, he depicted a young female perched on a Great Magnolia, Magnolia grandiflora. The current name for this species is Canada Warbler, Cardellina canadensis. In Plate 72 (right) Canada Warbler, Sylvia Pardalina, Audubon correctly identified the species. He depicted a male and female perched in a flowering branch of a Bay Laurel or Rhododendon maximum.

In this Bien edition double plate, the misidentified Bonaparte's Flycatcher that is actually an immature Canada Warbler is brought together side-by-side with an adult male and female of the same species. This richly colored chromolithograph also is exceptional for the inclusion of two magnificent botanicals, the ripe seed pod and leaves of Magnolia grandiflora in Plate 73, Bonaparte's Flycatcher, attributed to a talented young student of Audubon's, Joseph Mason, who he hired to be his assistant. Mason accompanied Audubon on a flatboat from Cincinnati Ohio to Louisiana, arriving in New Orleans on New year's day of 1821 and worked with him for the next two years. The branch of Rhododendron maximum in Plate 72, Canada Warbler, was painted by John J. Audubon in 1829 while he was exploring the Great Pine Swamp.

Below are excerpts from Audubon's the text descriptions for each plate.

Bonaparte's Flycatcher Whilst I have the pleasure of honoring this beautiful new species with the name of so distinguished a naturalist as CHARLES LUCIEN BONAPARTE, Prince of Musignano, I regret that I am unable to give any account of its habits, or even of its manner of flight, and must therefore confine my remarks upon it within very brief space. The following extract from my journal contains all that I have to say respecting it.
Monday, August 13, 1821. Louisiana.--On arriving at the Cypress Swamp (about five miles from St. Francisville) I saw a great number of small birds of different species, and as I looked at them I observed two engaged in a fight or quarrel. I shot at them, but only one fell. On reaching the spot, I found the bird was only wounded, and saw it standing still and upright as if stupefied by its fall. When I approached it to pick it up, it spread its tail, opened its wings, and snapped its bill about twenty times sharply and in quick succession, as birds of the genus do when seizing insects on wing. I carried it home, and had the pleasure of drawing it while alive and full of spirit. It often made off from my hand, by starting suddenly, and then would hop round the room as quickly as a Carolina Wren, uttering its tweet, tweet, tweet all the while, and snapping its bill every time I took it up. I put it into a cage for a few minutes, but it obstinately thrust its head through the lower parts of the wires. I relieved it from this sort of confinement, and allowed it to go about the room. Next day it was very weak and ruffled up, so I killed it and put it in spirits." To this account I have only to add, that I have not seen another individual since.

Canada Warbler What a beautiful object, in the delightful season of spring, is our great laurel, covered with its tufts of richly, yet delicately, colored flowers! In imagination I am at this moment rambling along the banks of some murmuring streamlet, overshadowed by the thick foliage of this gorgeous ornament of our mountainous districts. Methinks I see the timid trout eyeing my movements from beneath this rocky covert, while the warblers and other sylvan choristers, equally fond of their wild retreats, are skipping in all the freedom of nature around me. Delightful moments have been to me those when, seated in such a place, with senses all intent, I gazed on the rosy tints of the flowers that seemed to acquire additional coloring from the golden rays of the sun, as he rode proudly over the towering mountains, drawing aside as it were the sable curtain that till now hung over the landscape, and drying up, with the gentleness of a parent towards his cherished offspring, the dewy tears that glittered on each drooping plant. Would that I could describe to you the thoughts that on such a morning have filled my whole soul; but alas, I have not words wherewith to express the feelings of gratitude, love, and wonder that thrilled and glowed in my bosom! I must therefore content myself with requesting you to look at the blossoms of the laurel as depicted in the plate, together with two of the birds, which, in pairs, side by side, are fond of residing among its glossy and verdant foliage.

Ornithological Biography, or An Account of the Habits of the The Birds of United States of America Accompanied by Descriptions ot the Objects Represented in the Work Entitled The Birds of America, John J. Audubon,

Ornithological Biography, or An Account of the Habits of the The Birds of United States of America Accompanied by Descriptions ot the Objects Represented in the Work Entitled The Birds of America, John J. Audubon,

John James Audubon (1785–1851), is renowned for his extraordinary undertaking to record the birds of America. The images he created are icons of 19th-century art. Having studied and drawn birds since childhood, in 1819, Audubon followed his passion and fully embraced the life of an artist-naturalist, embarking on a mission to create the Birds of America. He explored the American backwoods and wilderness to discover, record, and illustrate its avian life. It was not until he reached the shores of Great Britain with a portfolio laden with his bird portraits that Audubon found an engraver who could produce his great work in the size of life, as he desired. Together with London engraver, Robert Havell, J. J. Audubon and his family created the lavish double-elephant-size Havell edition of aquatint engravings of The Birds of America, published 1827–38.