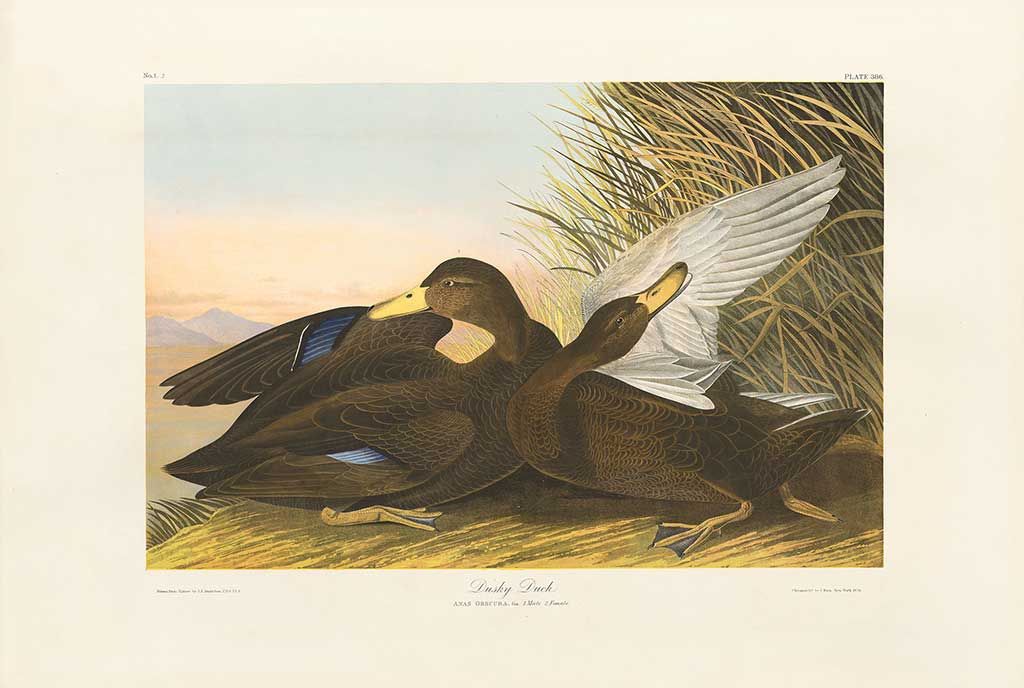 Acquire a superb double-elephant plate by John J. Audubon from The Birds of America, Pl. 386, Pl. 386 Dusky Duck., Ansa obscura, Gm. This richly colored chromolithograph from the Bien edition is available this week only at a special price. A male and female are depicted in the plate.

Also called the Black Duck, Audubon reports in the Ornithological Biography that the Dusky Duck, "extends its migration from the Straits of Belle Isle, on the coast of Labrador, to Texas. He found it breeding during his expedition to Labrador in 1831, and his son, John Woodhouse Audubon, discovered a nest on Galveston Island, Texas. He also received a report on the status of bird's range and other observations from his friend in Charleston, the naturalist, John Bachman.

"My friend, the Reverend Dr. JOHN BACHMAN, assures me that this bird, which some years ago was rather scarce in South Carolina, is now becoming quite abundant in that state, where, during autumn and winter, it resorts to the rice-fields. After feeding a few weeks on the seeds it becomes fat, juicy, and tender. He adds that the farther inland, the more plentifully does it occur, which may be owing to the many steamers that ply on the rivers along the sea coast, where very few are to be seen. They are, however, followed in their retreats, and shot in great numbers, so that the markets of Charleston are now amply supplied with them. He also informs me that be has known hybrid broods produced by a male of this species and the common domestic Duck; and that he had three of these hybrid females, the eggs of all of which were productive. The young birds were larger than either of their parents, but although they laid eggs in the course of the following spring, not one of these proved impregnated. He further states that he procured three nests of the Dusky Duck in the State of New York."

John James Audubon (1785–1851), is renowned for his extraordinary undertaking to record the birds of America. The images he created are icons of 19th-century art. Having studied and drawn birds since childhood, in 1819, Audubon followed his passion and fully embraced the life of an artist-naturalist, embarking on a mission to create the Birds of America. He explored the American backwoods and wilderness to discover, record, and illustrate its avian life. It was not until he reached the shores of Great Britain with a portfolio laden with his bird portraits that Audubon found an engraver who could produce his great work in the size of life, as he desired. Together with London engraver, Robert Havell, J. J. Audubon and his family created the lavish double-elephant-size Havell edition of aquatint engravings of The Birds of America, published 1827–38.