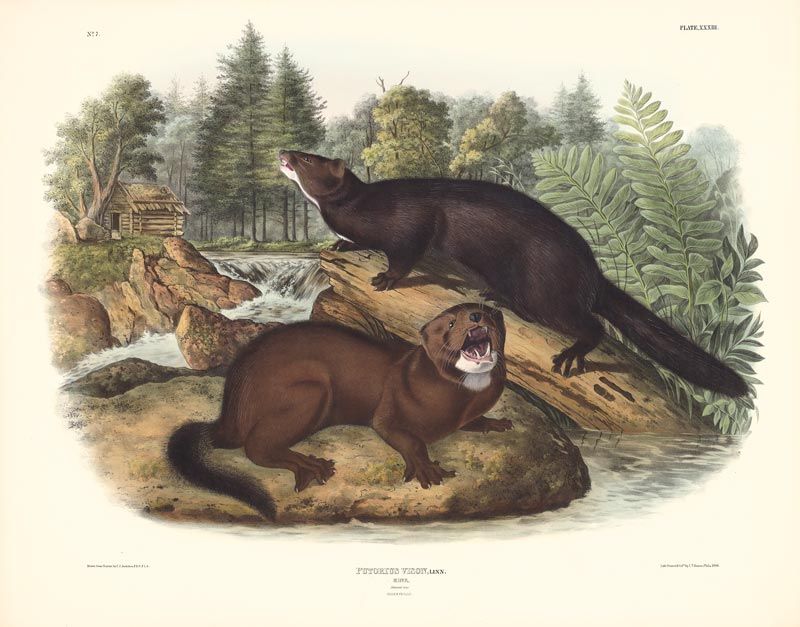 Audubon kept many animals at his home for observation. In addition to a broad discussion of its habits, natural history, and geographical distribution, in the text description that accompanies his plate of the mink, Audubon relates a story about his personal experience with one, providing insights into the artist’s unique familiarity with the animal subjects he portrayed.

“We had in our possession a pet of this kind for eighteen months; it regularly made a visit to the adjoining fish-pond both morning and evening, and returned to the house of its own accord, where it continued during the remainder of the day. It waged war against the Norway rats which had their domicile in the dam that formed the fish-pond, and it caught the frogs which had taken possession of its banks. We did not perceive that it captured many fish, and it never attacked the poultry. It was on good terms with the dogs and cats, and molested no one unless its tail or foot was accidentally trod upon, when it invariably revenged itself by snapping at the foot of the offender…. It was fond of squatting in the chimney-corner, and formed a particular attachment to an arm-chair in our study.”

Audubon depicted a male and female in a wooded landscape near a rushing stream and a log cabin. In perfect condition with beautiful original color. Imperial folio size, 22 x 28 inches.