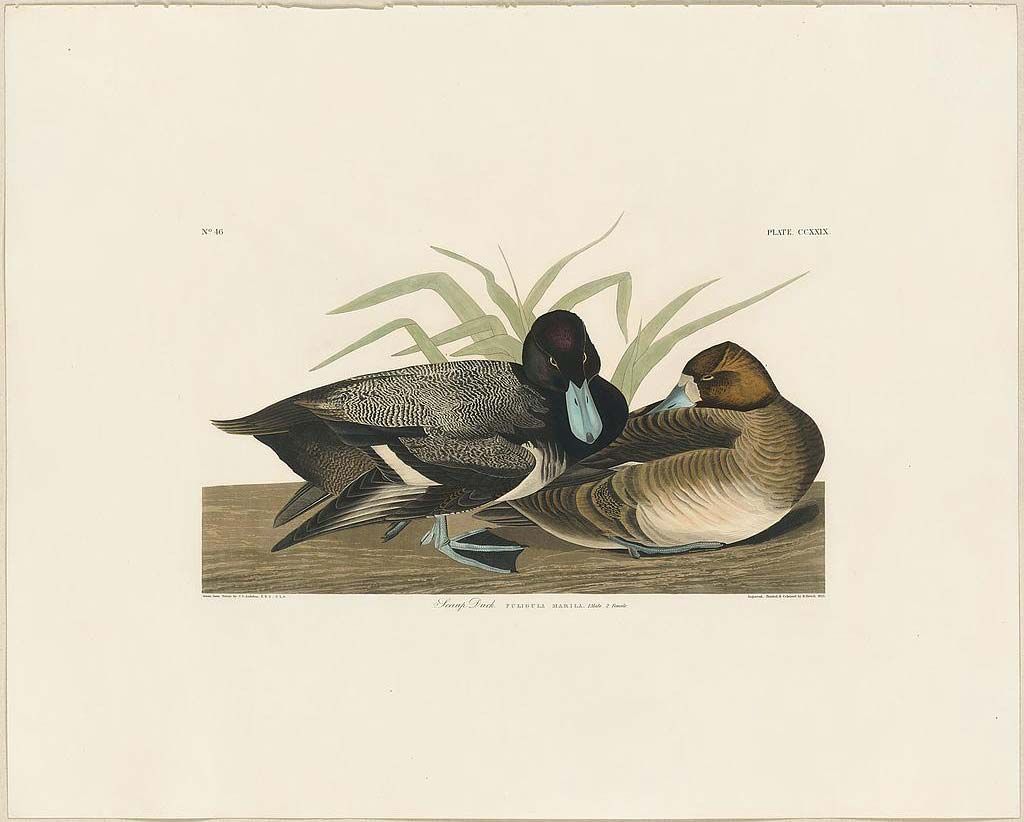 The distinctive pattern of the male bird’s whitish back covered with thin black wavy lines in the feathers, its yellow eyes surrounded by iridescent black, brown and green feathers and its contrasting blue bill, tipped in black, are striking details of this print. In the composition, Audubon’s horizontal placement of the birds is accented by the spreading green leaves of grass behind the ducks and linear quality of the bank. The cool colors of the birds’ pale blue feet and bills and fan of green grasses in the near background initiate a subtle visual dynamic in this elegant formal composition depicting a male Scaup Duck on the left and a female with her bill serenely nestled into her back feathers on the right predominantly in warm earth tones.

Today called Greater Scaup, Aythya affinis (Susanne M. Low, Index and Guide to Audubon’s Birds of America) Audubon’s entry in the Ornithological Biography disputes his predecessor in American ornithology Alexander Wilson’s information about this species of duck’s range of habitat, providing new information based upon Audubon’s more extensive exploration in the west. “The opinion, derived from WILSON'S account of the Scaup Duck, that it is met with only along our sea coasts, in bays, or in the mouths of rivers, as far as the tide extends, is incorrect. Had WILSON resided in the Western Country, or seen our large lakes and broad rivers during late autumn, winter, or early spring, he would have had ample opportunities of observing thousands of this species, on the Ohio, the Missouri, and the Mississippi, from Pittsburg to New Orleans.”