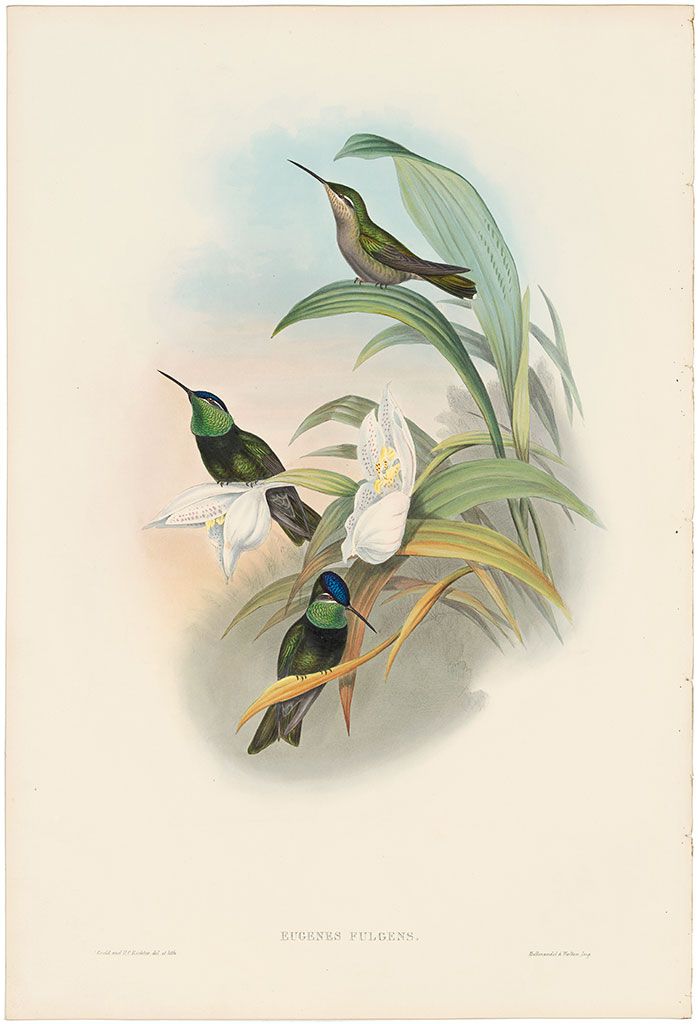 Enjoy special pricing on Pl. 59, The Rivoli, Eugenes Fulgens, Swains and Less., a superb original hand-colored lithograph from John Gould’s Family of Hummingbirds. As an artist-naturalist, an intrinsic part of Gould’s mission was to not only to depict, but to scientifically identify, name, and describe the attributes of each hummingbird. In the preface to this work, Gould states, ”I have been unceasing in my endeavors to obtain every species which has been discovered by enterprising travellers of this country, of Germany, of France, and of America.”

In the text description entry for this species, Gould states, “This well-known Mexican species, so celebrated for the beauty of its colouring, and the bold style of its markings, enjoys a very wide range of habitat extending from the latitude of Jalapa in Mexico, to the city of Guatemala; but only frequents high table-lands, such as those of Jalapa and Temiscaltepec. This fine bird was described by Swainson under the specific appelation of fulgens some years prior to that of Rivoli assigned to it by M. Lesson, in honour of M. Massena, Prince of Essling and Duke of Rivoli.”

Drawn in the size of life and lithographed by J. Gould and H. C. Richter, a male, female and young are depicted with Anguloa uniflora, a botanical that is commonly known as a tulip orchid. In this exquisitely detailed lithograph, the color of the the throat and wings of the birds is magnificently heightened with gold leaf and gum arabic. In perfect condition, 21.375 x 14.5 inches.