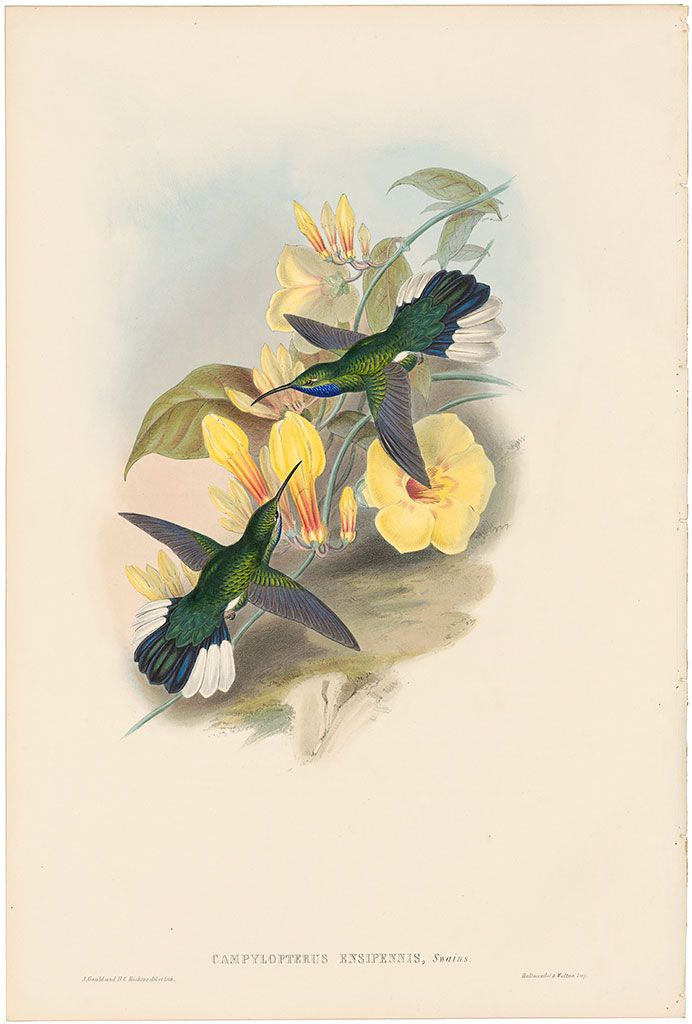 Enjoy special pricing on Pl. 46, Blue-throated Sabre-wing Campylopterus ensipennis, Swains, a superb original hand-colored lithograph from John Gould’s Family of Hummingbirds. As an artist-naturalist, an intrinsic part of Gould’s mission was to not only to depict, but to scientifically identify, name, and describe the attributes of each hummingbird. In the preface to this work, Gould states, ”I have been unceasing in my endeavors to obtain every species which has been discovered by enterprising travellers of this country, of Germany, of France, and of America.”

Drawn in the size of life and lithographed by J. Gould and H. C. Richter, a male and female are depicted with a magnificent botanical, Dipladenia harrisi. In this finely detailed lithograph, the color of the the throat and wings of the birds is magnificently heightened with gold leaf and gum arabic. In perfect condition, 21.375 x 14.375 inches.

In the text description entry for this species native to the West Indian Islands, Gould states, “The boldness of its markings and the brightness of its colouring render it one of the most beautiful [of its species]. Although the female is not so brightly coloured as her mate, she assimilates more closely to him in her dress than do the females of the other brilliantly coloured species to theirs; she is, however, somewhat smaller, and has the blue of the throat less conspicuous....”