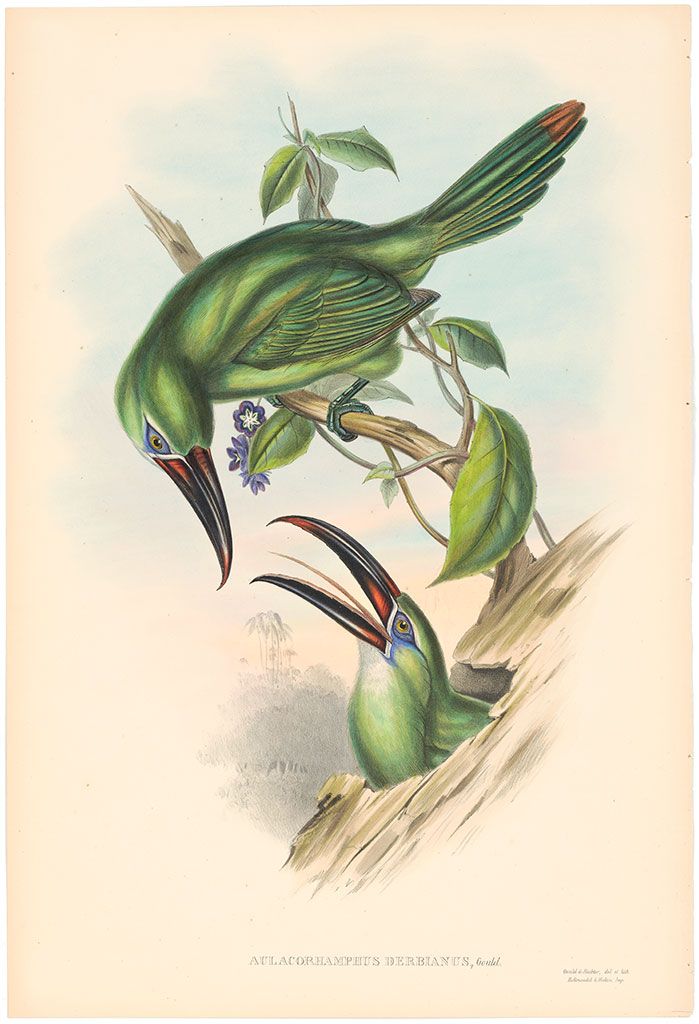 Enjoy special pricing this week only on Pl. 43 Derby's Groove-bill, Aulacorhamphus derbianus (Gould), a superb example from Family of Toucans, drawn from life and on stone by John Gould and H. C. Richter.

In 1835, Gould exhibited a specimen of this groove-billed Toucan at the London Zoological Society. That specimen was from the collection of the Earl of Derby, then the Zoological Society's President. During the meeting, Gould remarked that this toucan was previously undescribed and proposed it be named Aulacorhynchus Derbianus.  Pointing out "that the colouring of the extremities of the tail feathers would alone suffice to distinguish it from the other species at present known in this genus." He further described those differences that qualified this species as unique from those described previously, offering these specifics, "[I]n Aul. Derbianus, the two...intermediate tail feathers are tipped with brown. ...In the other three species, the tail feathers are either not marked by any particular color, have four intermediate tail feathers tipped in brown, or all of the tail feathers are tipped brownish red."

The exotic Toucans have a sense of familiarity because they are among the most often reproduced images of all bird art. The name Toucan is derived from the Tupi Indians of Brazil who call them Tucano. Their origin is the tropical rain forests of the Americas.

A Monograph of the Ramphastidae or Family of Toucans is the most flamboyant of Gould’s works. Originally published in London in three parts from 1833 to 1835, the first edition comprises 33 hand-colored and one uncolored lithograph. Lear contributed nine of the plates and the rest were drawn and lithographed by Elizabeth Coxen Gould, John Gould's talented wife, after sketches by John Gould. Gould published a second edition of the Toucans from 1852–54 with 52 hand-colored plates drawn and lithographed by John Gould and H. C. Richter.

John Gould (1804–1881) is the most prolific publisher of ornithological subjects of all time. In nineteenth-century Europe, his name was as well known as Audubon’s was in North America. Gould's love of natural history was fostered in the gardens of King George III where his father was chief gardener at Windsor Castle. Although trained as a gardener, Gould’s interests soon evolved. He moved to London where he worked as a taxidermist, and at the age of 27, he was appointed taxidermist to the Zoological Society of London. After three years, he progressed to the position of curator of birds and chief taxidermist. In 1830, newly married, Gould and his artist wife, Elizabeth, began their publishing career.

Unlike Audubon, whose life’s work focused on one region, Gould traveled widely and employed other artists to help create his lavish, hand-colored lithographic folios. Among Gould's renowned works is the monumental Birds of Europe, originally published in 22 parts from 1832 to 1837 and A Monograph of the Trochilidae or Family of Humming-Birds (1849-87), considered Gould’s masterpiece in both breath and beauty.