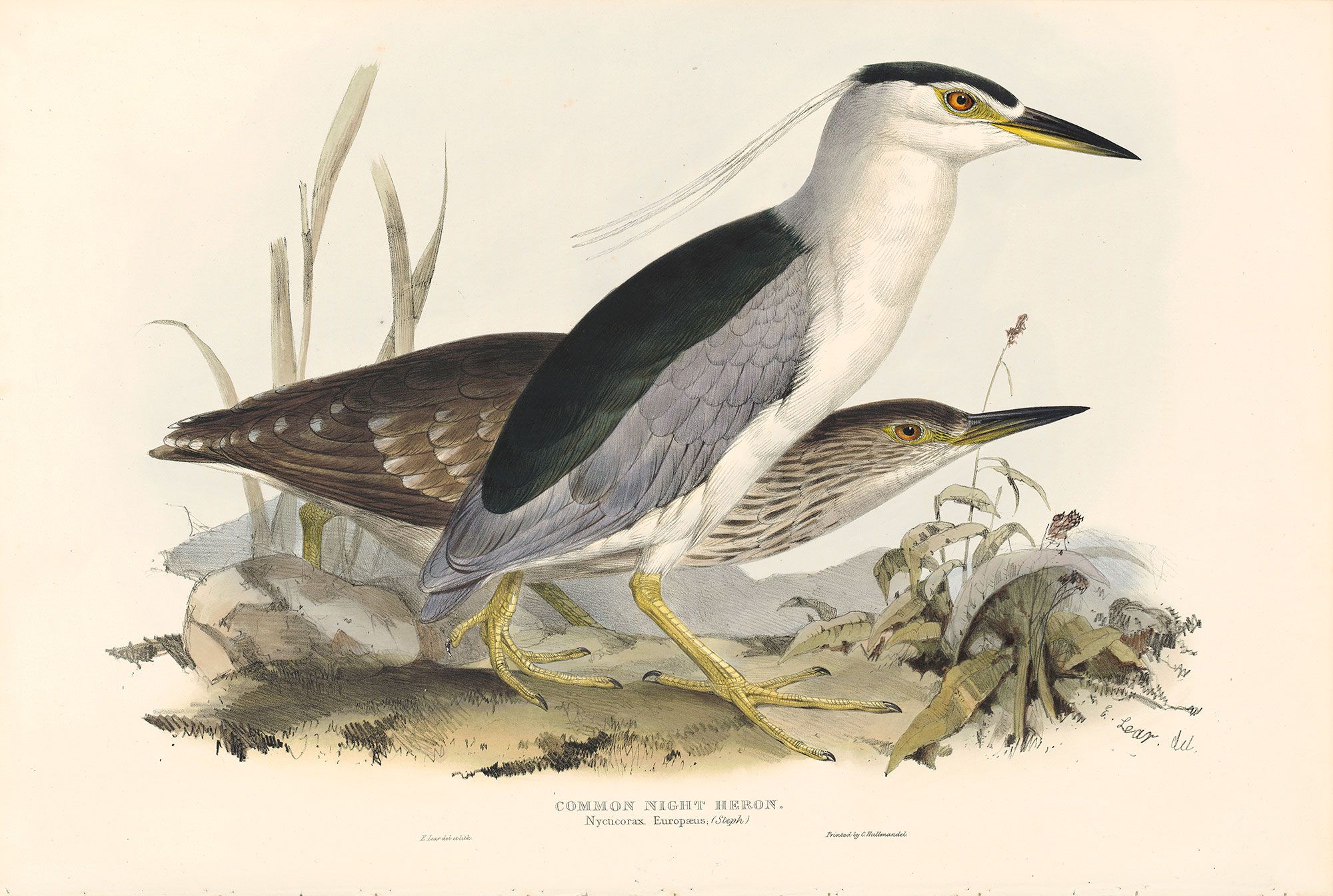 Enjoy significant savings on Pl. 279, Common Night Heron, Nyeticorax Europeus (Steph.), an exquisite hand-colored lithograph from John Gould’s Birds of Europe, drawn from nature and signed in the stone by Edward Lear. Lear depicted an adult and young bird in their natural size.

This beautifully rendered and stunning composition emphasizes differences in appearance between the the adult and young birds, which previously were misidentified as different species.

To instruct the reader in proper identification, Gould explains in the accompanying text entry that, “[t]he young bird during its first or nestling plumage is destitute of the plumes at the back of the head, has the culmen and point of the bill blackish brown, with the base of the lower mandible yellowish green ; the head and back of the neck brown, with the centre of each feather yellowish-white ; the front of the neck and the feathers of the breast and under surface  yellowish white deeply margined with dull yellowish brown ; the back and lesser wing coverts deep brown, with the centre of each feather streaked with yellowish white ; greater coverts and quills deep brown, tipped with triangular spots of white ; the tail brown, the legs yellowish green, and the irides bright orange. Between this state, when it is known by the name Gardenian heron, and maturity, it acquires at each successive moulting a plumage approaching nearer to that of the adult, and in each of these stages has been described as a different species.” The melding of science and art find their perfect expression in Lear’s glorious rendering of the Common Night Heron.

The monumental Birds of Europe, originally published in 22 parts from 1832 to 1837 comprises 448 hand-colored folio-size lithographs in five volumes. Sixty-seven of the plates and many of the foregrounds were drawn and lithographed by Edward Lear, one of the great ornithological artists of his era. The rest of the plates were drawn and lithographed by Gould’s talented wife, Elizabeth Coxen Gould, from sketches by John Gould.

Born outside London in 1812, Lear was the twentieth child of Jeremiah Lear, a well-to-do London stockbroker. He was raised primarily by his elder sister, Ann, who provided classical studies and taught him to draw from nature. The multi-talented Edward Lear (1804–1888) was a self-taught naturalist and painter who later became famous for authoring books of nonsense poems and limericks. About 1828, Lear worked as a zoological draftsman, gaining employment at the Zoological Society in London where he met John Gould, who became one of the great 19th-century publishers of natural history monographs.

Lear drew 68 plates and many of the foregrounds for Gould’s Birds of Europe (1832–1837) and also contributed nine of the 34 plates that comprised Gould’s A Monograph of the Family of Toucans. Lear’s exacting and masterly skill as an artist was employed by other major publishers of 19th-century English ornithologies and natural histories. His work is distinguished by the fact that he was the first bird artist to draw primarily from living examples, recording not only the precise details of the birds he painted, but also expressing each ornithological subject’s unique character. The plates Lear contributed to John Gould’s Birds of Europe are among the finest of that work. These rare, beautifully hand-colored plates are signed by Lear in the lithographic stone.