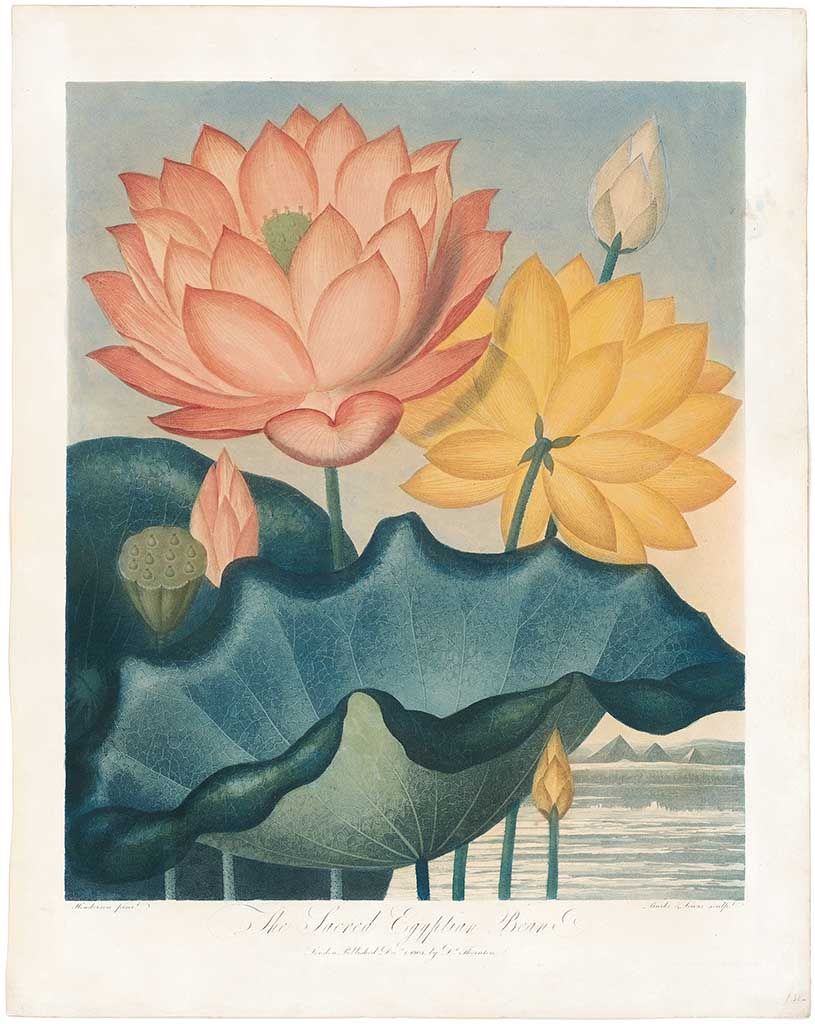 This week only, enjoy a substantial discount on Pl. 31, The Sacred Egyptian Bean, Nympaea nelumbo, an exquisite hand-colored  engraving after the painting by the English artist Peter Charles Henderson, from Dr. Robert Thornton’s celebrated Temple of Flora. Henderson produced 14 paintings for this work. A striking botanical print, the diminutive size of the pyramids in the background provides a visual cue to the dramatic size of this storied plant while lending an exotic element to Henderson's bold composition.

In his work, Flower and Fruit Prints of the 18th and early nineteenth centuries (1938), Gordon Dunthorne points to this print as "[o]ne of the best examples of colour printing, often as many as four colours are printed from the same plate at one time."

"The Sacred Egyptian Bean, which no longer grows in Egypt, was first used as a religious symbol in that country, but veneration for it as the Sacred Lotus of the East afterwards spread to Buddhists and Hindus. ...It grows along the edges of lakes in the countries of the East, thrusting up large pink flowers, which it holds well above the water. In those countries it is found in a white form as well as the pink, but the yellow flower shown in this picture is taken from an American species, included by Thornton to make the picture more colourful. The plant has distinctive `pepper-pot' seedpods and the seed itself has remarkable powers of survival, having been known to germinate after lying dormant for four hundred years. The picture was painted by Peter Henderson who has achieved a lightness and translucency.... The plate has exceptional charm and a distinctly modern feel about it, although produced nearly two hundred years ago."

Excellent color, color-printed aquatint and stipple engraving, finished by hand. Engraved by Burke and Lewis, published by Thornton in London on December 1, 1804. Plate 31, The Sacred Egyptian Bean is in perfect condition, 23-1/2 x 18-1/2 inches.

Dr. Robert Thornton’s Temple of Flora (1798–1810), the third and final part of his New illustration of the sexual system of Carolus von Linnaeus, is perhaps the single most famous of all florilegia. The driving force and visionary behind the creation of this great work, Thornton employed other artists and engravers to produce it. Printed in color and finished by hand, a variety of techniques were used, including aquatint, mezzotint, stipple, and line engraving. Most plates were altered at various points, resulting in as many as four distinct states for some images.

Dr. Robert Thornton (c. 1768–1837) intended to issue 70 plates dramatically and poetically illustrating Linnaeus’ discoveries about the sexual system of plants. In actuality, only 33 plates were completed before the well-stationed physician faced financial ruin. The project fell victim to Thornton’s fanatical attention to detail and changing tastes of a social elite, who had become somewhat jaded by the preponderance of great flower books created during this period. When Thornton died in 1837 his family was nearly destitute. Despite his setbacks, Thornton’s epic depictions of flowers are celebrated as one of the most significant artistic contributions to botanical art of that period.