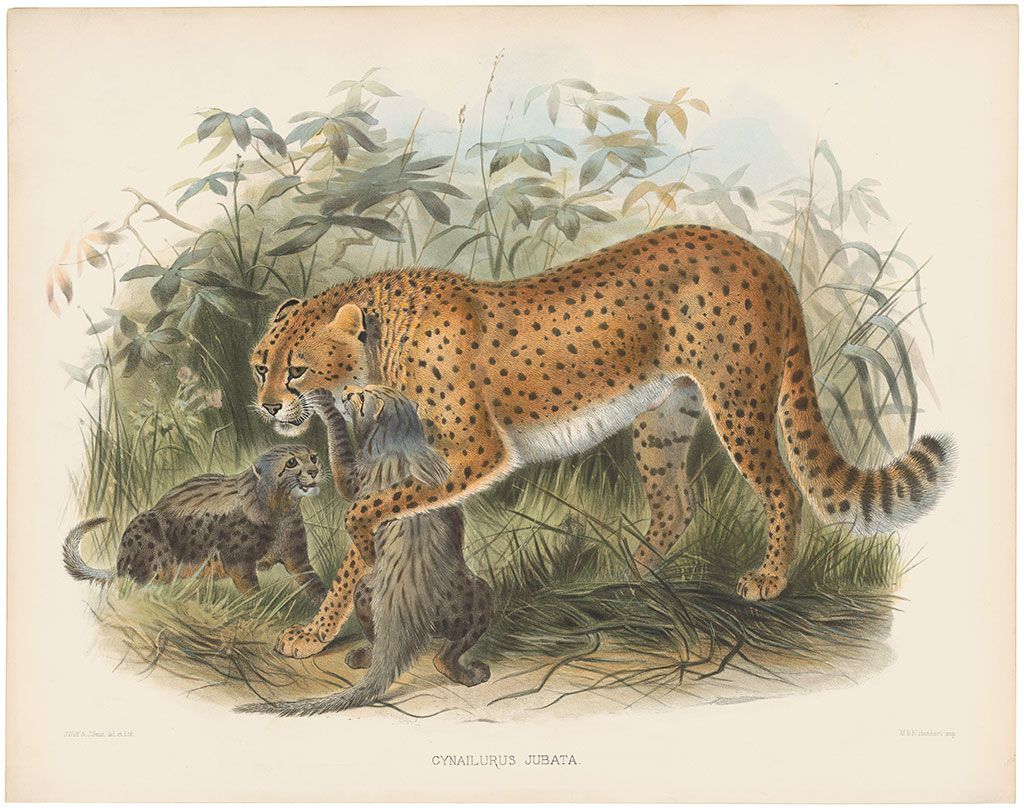 In perfect condition, this first-edition lithograph has beautiful original color. Drawn by the celebrated zoological artist, Josef Wolf (1820–1899) and the lithographed by Joseph Smit, printed in London by M & N Hanhart, 23.5 x 18.5 inches.

Elliot’s prints are among the rarest of all natural history works. Perhaps fewer than 75 folios were produced. A first edition, hand-colored collection of 43 lithographic plates, Elliot’s Family of Cats was published in London between 1878  and 1883. Family of Cats stands with Audubon’s Quadrupeds of North America as one of the finest works of nineteenth-century mammology.

Elliot's fascination with his subject matter is evident in the introduction to the Monograph of the Felidae, "The Felidae contain those Beasts of Prey which are the most perfect in organization, attractive in appearance, and terrible in destructive power...their lithe and agile forms are clothed in coats of brilliant colours, varied by fanciful markings of opposite hues: while their easy carriage and proverbial silent movements constitute, in their attractive grace, the very poetry of motion."

Independently wealthy, Elliot spared no expense in the creation of his large-folio treatise and employed Joseph Wolf (1820–99) and Joseph Smit to illustrate these richly colored images depicting every species of cat. Born in New York City, Daniel Giraud Elliot (1835 – 1915) collected bird specimens in his youth, and later traveled extensively in Europe and Asia to pursue his interest in ornithology. An important figure in the nineteenth-century scientific community, he was a founder of the American Museum of Natural History in New York and co-founder of the American Ornithologists Union. He went on to become Curator of Zoology at Chicago’s Field Museum in 1884. During his career, Elliot also published lavish ornithological folios, including Monograph of the Paradiseidae, or Birds of Paradise (London, 1873), and Monograph of the Pittidae (New York, 1867).