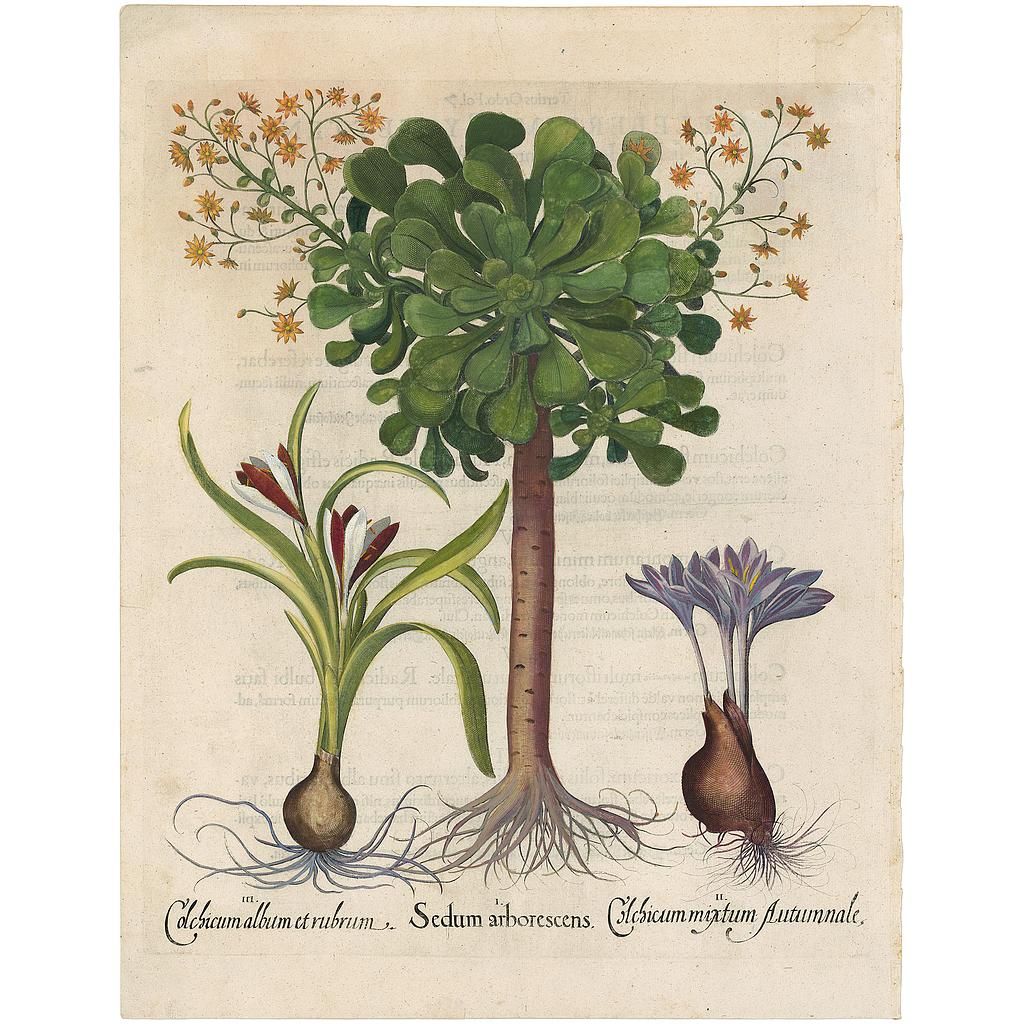 This lyrical and balanced composition features a sedum shrub native to Mexico in the center, flanked by a red and white striped crocus (left) and an autumn crocus (right). Each plant is shown in leaf, flower, bulb and root details. In perfect condition, this richly detailed hand-colored engraving is from the first edition, 1613. 22 x 16-1/2 inches.

Wilfred Blunt, noted author of The Art of Botanical Illustration an Illustrated History, writes of the Besler Florilegium, “The designs are really impressive, and the invention rarely flags ; the rhythmic pattern of the roots, the calligraphic possibilities of lettering, are fully explored and utilized ; and the dramatic effect of the whole is enhanced by the noble proportions of the plates, which, when coloured make decorations that remained unrivaled until the publication nearly two centuries later of Thornton’s Temple of Flora.”

Besler introduced the idea of documenting the vast garden and depicting each plant as it bloomed throughout the four seasons, hence the work is sometimes referred to as the Four Seasons. The Prince Bishop wrote that the Nuremberg apothecary “wishes to have [drawings of his flowers] engraved in copper, printed, dedicated to me and to seek his fame and profit with the book….” Besler worked on the drawings for 16 years, but most of the colored sketches were made b

etween 1610 and 1612. These were sent to the workshop of Wolfgang Kilian (1581–1662) in Augsburg to be translated by skilled artists into black-and-white drawings that could serve as templates for the engravings that were executed in Kilian’s workshop by a team of engravers. Colorists then carefully hand-colored the engraved plates. The Bishop financed this lavish production until his death in 1612. Work on the folio continued under his successor as Bishop of Eichstäat, Johann Christoph von Westerstetten. Four distinct editions of Besler’s Hortus Eystettensis were published between 1613 and 1713—the deluxe first edition, 1613; first edition 1613; second edition, 1640; and third or jubilee edition 1713. Each edition enjoys its own character and attributes.The Hortus Eystettensis is exceptional for many reasons. The first botanical in history to portray flowering plants as objects of beauty, it deviated from non-aesthetic and awkward representations of preceding publications that focused on plants as herbal subjects and set the standard for great flower folios of the following centuries.