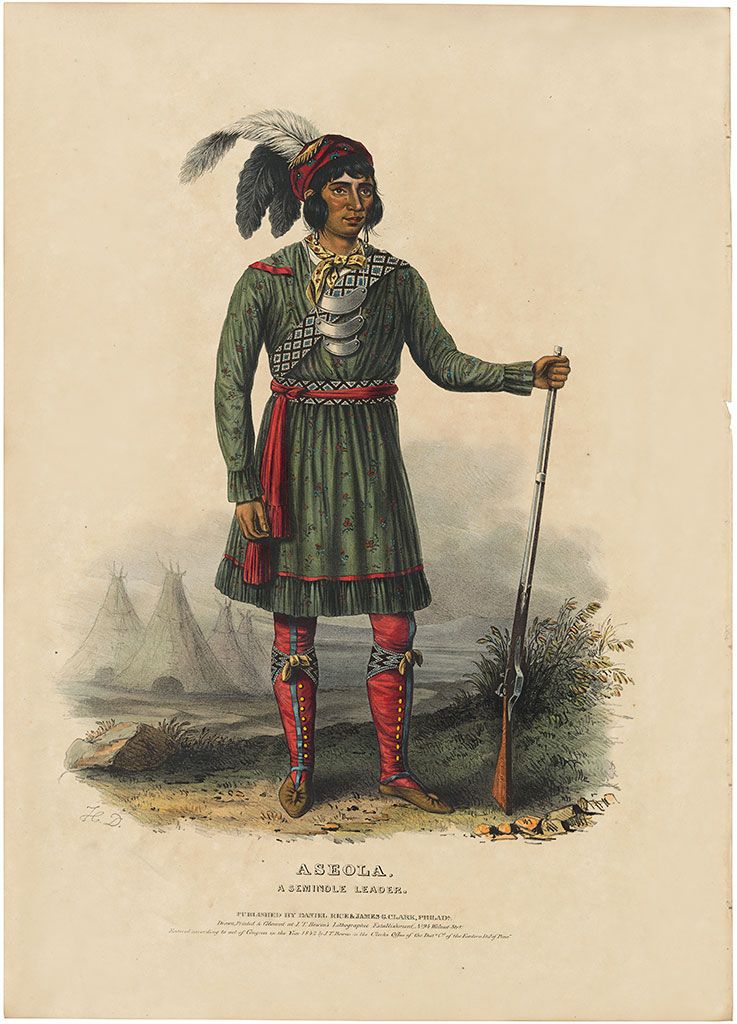 Enjoy special savings on Plate 89 Aseola, A Seminole Leader, a richly hand-colored lithograph from the McKenny-Hall folio, History of the Indian tribes of North America, with biographical sketches and anecdotes of the principal chiefs. Embellished with one hundred and twenty portraits, from the Indian gallery in the Department of war, at Washington.

Aseola,1804–1838, whose name is usually spelled Oseola, was a valiant warrior. During the Second Seminole War, he led the Florida Seminole tribe against an attempt by the US Army to forcibly relocate them to a reservation west of the Mississippi River. Oseola was captured in October 1837, along with several other Seminole leaders, and imprisoned at Fort Moultrie on Sullivan's Island, near Charleston, South Carolina, where he died on January 30, 1838. Oseola was not among the Florida Seminole delegations that visited Washington, D.C., in 1825 and 1826, whose portraits King painted these portraits until 1837, and later used as models for most of the McKenney-Hall Indian Gallery.

In the 1855 edition by McKenney-Hall, it is noted that Oseola "was visited by several persons [while at Fort Moultrie], and...by several artists, who took likenesses of him, one of the finest of which is that taken for the War Department." Patricia Wiles Wickham states in her book Osceola's Legacy that "the name of only one artist is recorded as having been sent to Charleston at the express request of the War Department—that of George Catlin," Wickham further suggests the possibility that McKenney may have commissioned a lithographer to produce an image from Catlin's lithograph of Oseola with changes to the face and other details to avoid copyright infringement. The full-length McKenney-Hall portrait depicts the legendary Osceola similarly dressed and standing with a rifle like the figure in George Catlin's lithograph, Osceola of Florida, after his original painting, which Catlin drew on stone in 1838. However, the McKenney-Hall's Aseola is set against a generic Indian background not found in the Catlin portrait.

Reference: Osceola's Legacy, Patricia Wiles Wickham, University of Alabama Press, 2006, pages 127–128; History of the Indian tribes of North America, with biographical sketches and anecdotes of the principal chiefs. Embellished with one hundred and twenty portraits, from the Indian gallery in the Department of war, at Washington, Thomas L. McKenney and James Hall, In Three Volumes, Vol II, 1855, p. 166..

One of the earliest significant American lithographic plate books, the McKenney-Hall Indian Gallery was produced in twenty parts from 1830 to1844. An enormous undertaking. initially the work did not attract many subscribers. Because initially it was not financially successful, it took six publishers to complete.  Several lithographers, including Edward C. Biddle, Henry Inman, and George Lehman, drew the images on stone to produce the lithographs and James Hall wrote the text. These richly hand colored lithographs are today one of the most important and attractive nineteenth-century American ethnographic works created.

Thomas Loraine McKenney (1785–1859) was superintendent of the war department under four presidents, Madison, Monroe, Adams and Jackson. By all accounts, he was a friend and admirer of the Native Americans and believed that the peace treaties he helped negotiate would be honored. Charles Bird King painted the visiting chiefs as they came to Washington to negotiate treaties with the federal government filling the war department’s gallery.
Thomas McKenney dreamed of producing a portfolio of these images and written accounts. Fortunately in 1832, McKenney hired the distinguished portrait painter, Henry Inman (1801–1846), to make copies of King's paintings, of which there were more than a hundred. Inman worked on the project until 1833, and was then replaced by the Swiss landscape artist George Lehman. Charles Bird King's original paintings were destroyed in a fire at the Smithsonian in 1865, and Inman's copies provide the only existing record of them.