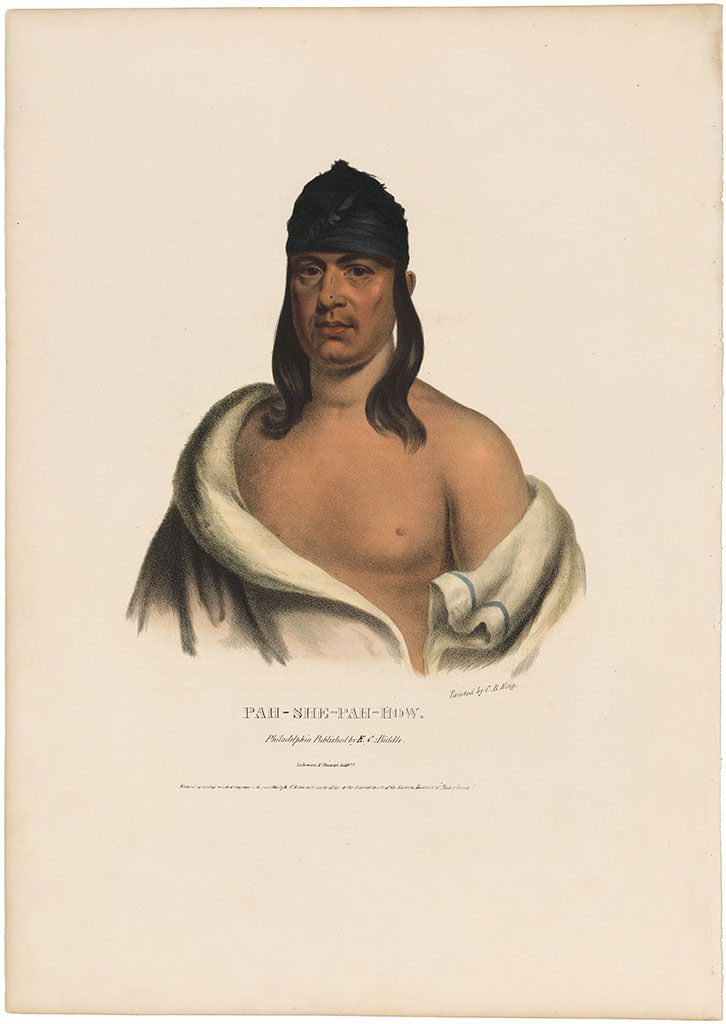 Enjoy special savings on a richly hand-colored lithograph from the McKenney Hall Indian Gallery portfolio, Plate 19 Pah-she-pah-how, “The Stabber”, which depicts a Sauk chief. According to James Hall's text introducing the subject of this the plate, “Little is known of this chief, except that he was of sufficient note among his people to be chosen one of a delegation to visit Washington on business relating to his tribe.”

The Great Indian Chiefs of the West, or, Life and Adventures of Black Hawk, a history of the Black Hawk wars that ended in 1832 first published by Benjamin Drake in 1838, states that in 1804, U.S. President Jefferson directed William Henry Harrison, then Governor of the Indiana Territory, to create a treaty with the Sauks, “and obtain, if possible cessions of land on both sides of the Illinois River, and to give them, in lieu thereof, an annual compensation. In November following, Governor Harrison concluded the treaty with the Sacs and the Foxes, under his instructions.” Pah-she-pah-how was one of five Indian chiefs who signed this treaty. (http://lincoln-live.lib.niu.edu/islandora/object/niu-lincoln%3A34713)

James Hall’s text relates the story behind the murderous epithet assigned to Pah-she-pah-how.

“He is represented to be vindictive and implacable in his resentments. The Indian agent at Prairie du Chien, having offended him, Pashepahaw resolved [to] revenge, and actually undertook a long journey with the view of killing him. Tai-mah, whose portrait  will appear in the course of this work, hearing the Stabber’s purpose, out sped him, and made known to the agent his bloody design. This timely information, doubtless, saved the agent’s life. The untrimmed locks that hang down on the Stabber’s shoulders indicate unsatisfied revenge.”

Hall’s assessment of the Sauk tribe as a whole, though, is much better, and his entry also provides an unique record of the great losses sustained by indigenous peoples due of the United States’ expansionist policies and treaties during the nineteenth century.

“The Sauk’s, as a nation, afford favorable specimens of the Indian race. Among a large number that we have seen, the majority were tall, well-formed, active men, who bestowed much care on the decoration of their person, and were dignified in their manners. They are a war-like, active,and sprightly people, friendly to the whites, and hospitable to strangers. Their principal residence, until recently, was on the shores of Rock River, in Illinois, where their hunting grounds comprised the most fertile and beautiful region of the west. They have been removed from those lovely plains to other lands beyond the Mississippi, and their recent haunts are now covered with farms of an industrious population.”