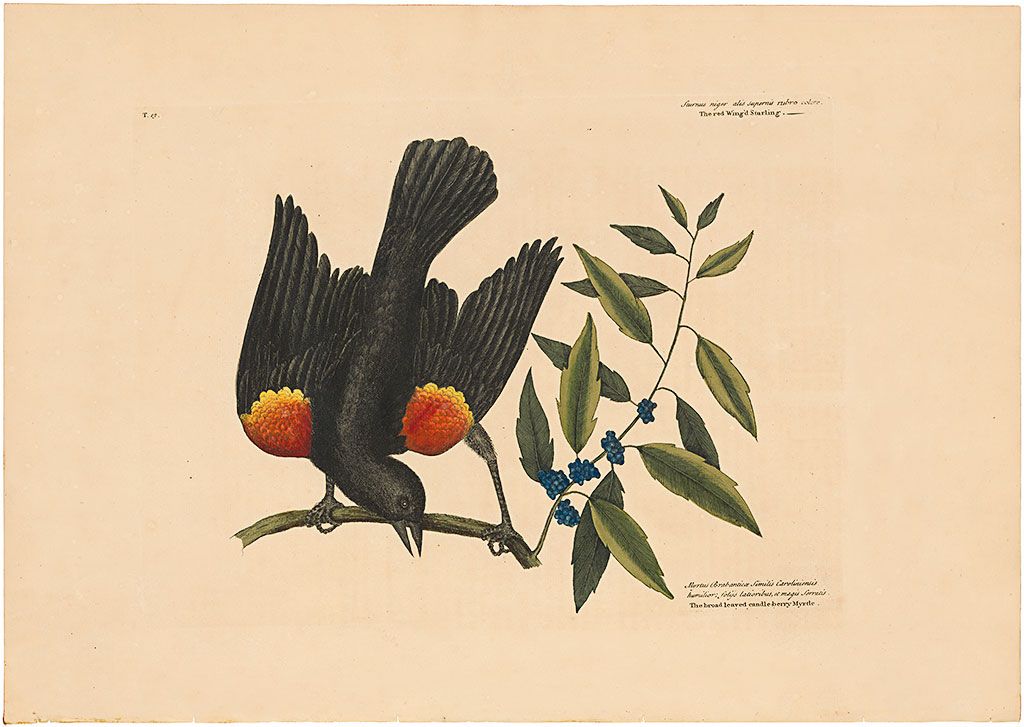 Acquire a superb original Catesby engraving at a special price, Pl. 13 The Red Winged Starling, from The Natural History of Carolina, Florida and The Bahama Islands, Volume I. The first illustrated work of American flora and fauna to depict the entire spectrum of life forms, Catesby’s Natural History stands today as a monument in American science and natural history art.

As described by Catesby:

A Cock weighed between three and four ounces, in shape and size resembling our Starling. The whole Bird (except the upper part of the Wings) is black, and would have little beauty, were it not for the Shoulders of the wings, which are bright scarlet. This and the Purple-Daw are of the same Genus, and are most voracious corn-eaters. They seem combined to do all the mischief they are able: and, to make themselves most formidable, both kinds unite in one flock, and are always together, except its breeding-time, committing their devastations all over the Country. When they are shot, there usually falls of both kinds; and before one can load again, there will be in the same place oft-times more than before they were shot at. They are the boldest and most destructive Birds in the Country. This seems to be the Bird Hernandez calls ACOLCHICHI, Will. Orn. p. 391. They make their Nests in Carolina and Virginia not on trees, but always over the water, amongst reeds or sedge; the tops of which they interweave very artfully, and under fix their Nests; and to secure from wet, that where the Tides flow, it is observed never to reach them. They are familiar and active Birds, and are taught to talk and sing.

The Hens are considerably less than the Cocks, of a mixed gray, and the red on their Wings not so bright.

This grows usually not above three foot high; in which, and its having a broader leaf than the tall Candle-berry Myrtle.