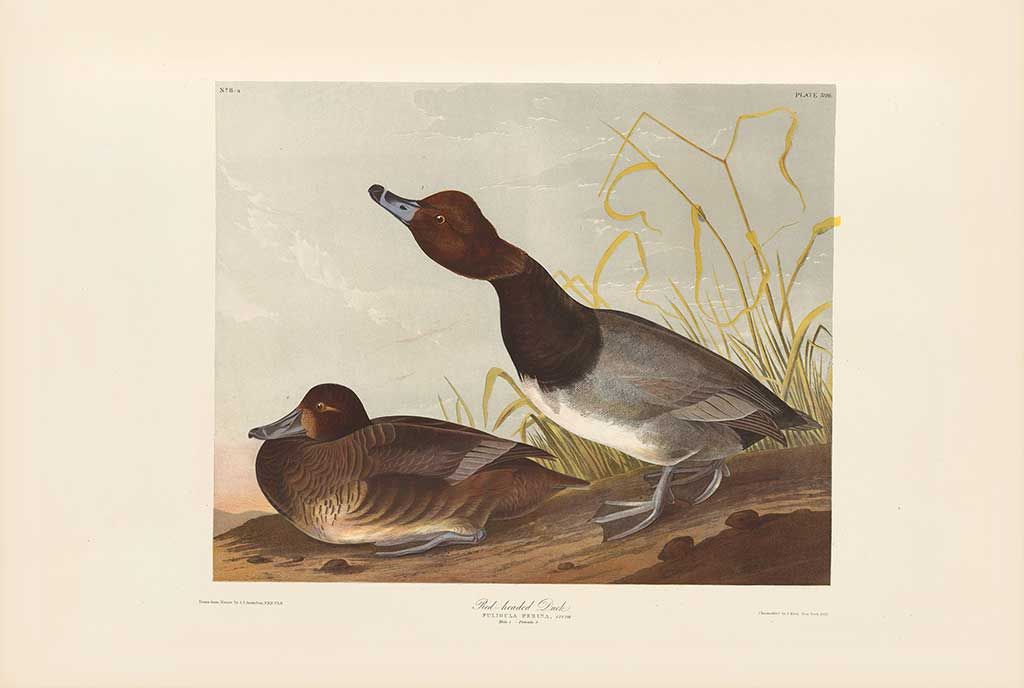 In his Ornithological Biography, Audubon remarks upon the unique attributes of the Red-headed Duck for which he had a special fondness.

In confinement, they do not exhibit that degree of awkwardness attributed to them when on land. It is true that the habitual shortening of the neck detracts from their beauty, so that in this state they cannot be said to present a graceful appearance; yet their aspect has always been pleasing to my sight. Their notes are rough and coarse, and bear less resemblance to the cries of those species which are peculiar to fresh water than those of any other of their tribe. Their flight is performed in a hurried manner, and they start from the water pell-mell; yet they can continue very long on wing, and the motions of their pinions, especially at night, produce a clear whistling sound.

The fine pair from which I made the two figures in the plate were given me by my friend DANIEL WEBSTER, Esq. of Boston, Massachusetts, whose talents and accomplishments are too well known to require any eulogium from me.

John James Audubon (1785–1851), is renowned for his extraordinary undertaking to record the birds of America. The images he created are icons of nineteenth-century art. Having studied and drawn birds since childhood, in 1819, Audubon followed his passion and fully embraced the life of an artist-naturalist, embarking on a mission to create the Birds of America. He explored the American backwoods and wilderness to discover, record, and illustrate its avian life. It was not until he reached the shores of Great Britain with a portfolio laden with his bird portraits that Audubon found an engraver who could produce his great work in the size of life, as he desired. Together with London engraver, Robert Havell, J. J. Audubon and his family created the lavish double-elephant-size Havell edition of aquatint engravings of The Birds of America, published 1827–1838.