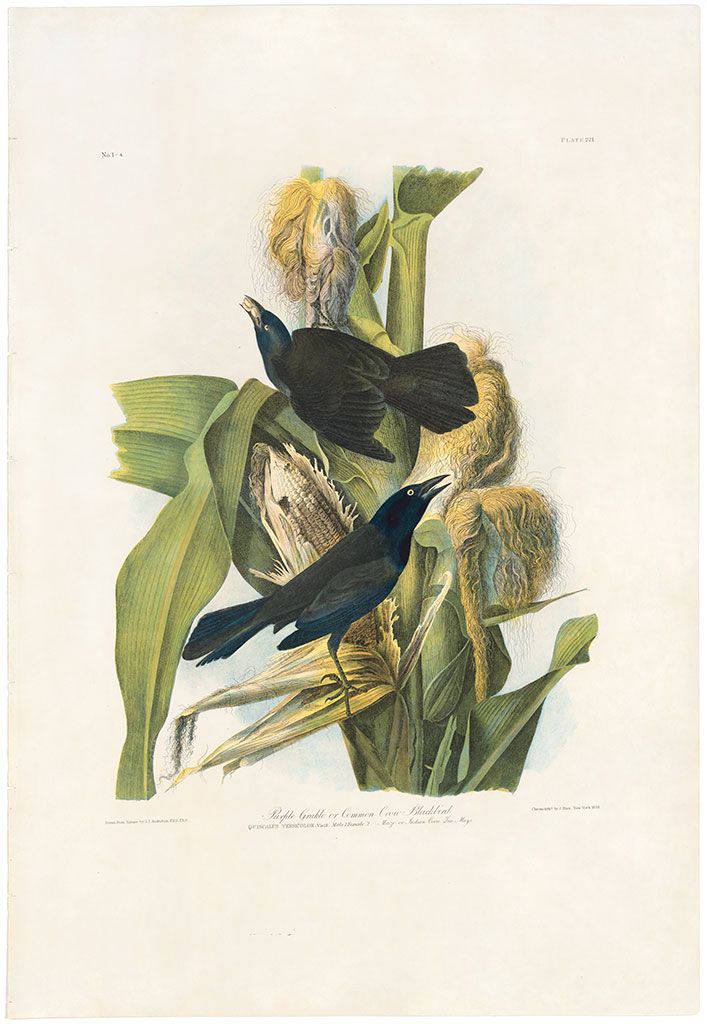 Acquire a superb plate from the Bien edition of John J. Audubon's Birds of America, Pl. 221, Purple Grackle, or Common Crow Blackbird, Quiscalus versicolor, Viell. Audubon's lively, balanced, and strongly vertical composition portrays a female (top) and a male (below) on a stalk of the maize or Indian corn plant, a favorite food source. The current name is Common Grackle, Quiscalus quiscula. This week only, enjoy significant savings on this richly detailed chromolithograph.

In an excerpt from his Ornithological Biography, Audubon keenly observes the purple grackle with an appreciative painter's eye, while also noting the natural history, such as its habits and distribution, providing a complementary description in words to his vision of the Purple Grackle as illustrated in the plate:

These birds are constant residents in Louisiana. I say they are so, because numbers of them, which in some countries would be called immense, are found there at all seasons of the year. No sooner has the cotton or corn planter begun to turn his land into brown furrows, than the Crow-Blackbirds are seen sailing down from the skirts of the woods, alighting in the fields, and following his track along the ridges of newly-turned earth, with an elegant and elevated step, which shews them to be as fearless and free as the air through which they wing their way. The genial rays of the sun shine on their silky plumage, and offer to the ploughman's eye such rich and varying tints, that no painter, however gifted, could ever imitate them. The coppery bronze, which in one light shews its rich gloss, is, by the least motion of the bird, changed in a moment to brilliant and deep azure, and again, in the next light, becomes refulgent sapphire or emerald-green.

John James Audubon (1785–1851), is renowned for his extraordinary undertaking to record the birds of America. The images he created are icons of nineteenth-century art. Having studied and drawn birds since childhood, in 1819, Audubon followed his passion and fully embraced the life of an artist-naturalist, embarking on a mission to create the Birds of America. He explored the American backwoods and wilderness to discover, record, and illustrate its avian life. It was not until he reached the shores of Great Britain with a portfolio laden with his bird portraits that Audubon found an engraver who could produce his great work in the size of life, as he desired. Together with London engraver, Robert Havell, J. J. Audubon and his family created the lavish double-elephant-size Havell edition of aquatint engravings of The Birds of America, published 1827–1838.