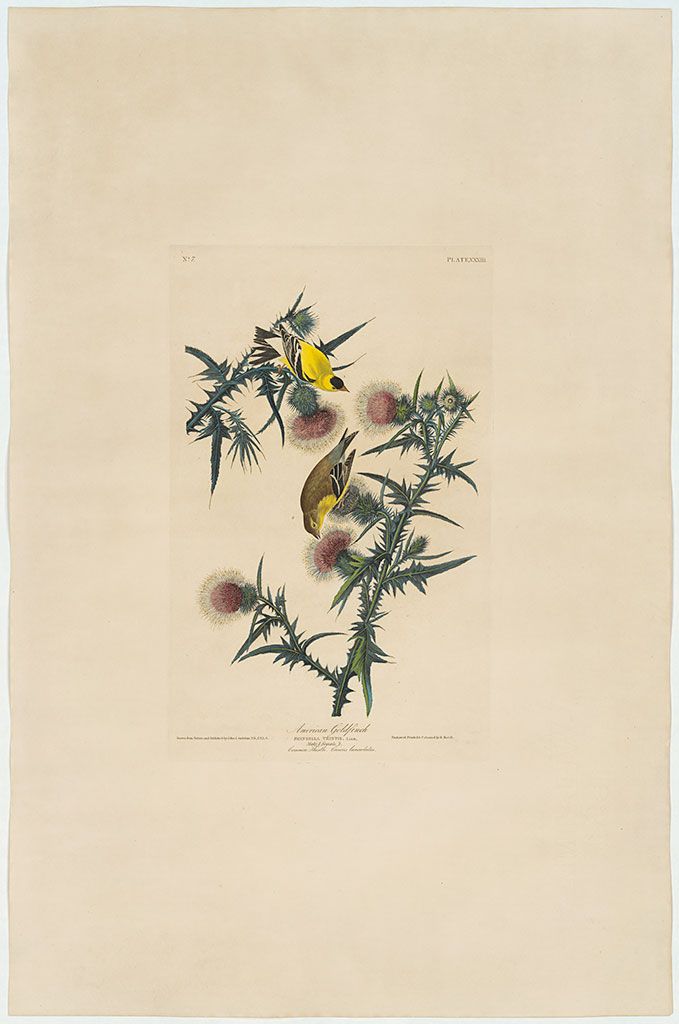 Acquire a superb Havell edition aquatint engraving by John J. Audubon, Plate 33, American Goldfinch, Fringilla tristis (Linn.), available this week only at a substantial discount. Audubon figured the vividly colored male bird (1) above the female (2) on stalks of Common Thistle, Cnicus lanceolatus, a favorite food, as he described in the accompanying text below.

The food of the American Goldfinch consists chiefly of seeds of the hemp, the sun-flower, the lettuce, and various species of thistle. Now and then, during winter, it eats the fruit of the elder.

In ascending along the shores of the Mohawk river, in the month of August, I have met more of these pretty birds in the course of a day's walk than anywhere else; and whenever a thistle was to be seen along either bank of the New York canal, it was ornamented with one or more Goldfinches. They tear up the down and withered petals of the ripening flowers with ease, leaning downwards upon them, eat off the seed, and allow the down to float in the air. The remarkable plumage of the male, as well as its song, are at this season very agreeable; and so familiar are these birds, that they suffer you to approach within a few yards, before they leave the plant on which they are seated. For a considerable space along the Genessee river, the shores of Lake Erie, Lake Ontario, and even Lake Superior, I have always seen many of them in the latter part of summer. They have then a decided preference for the vicinity of water.