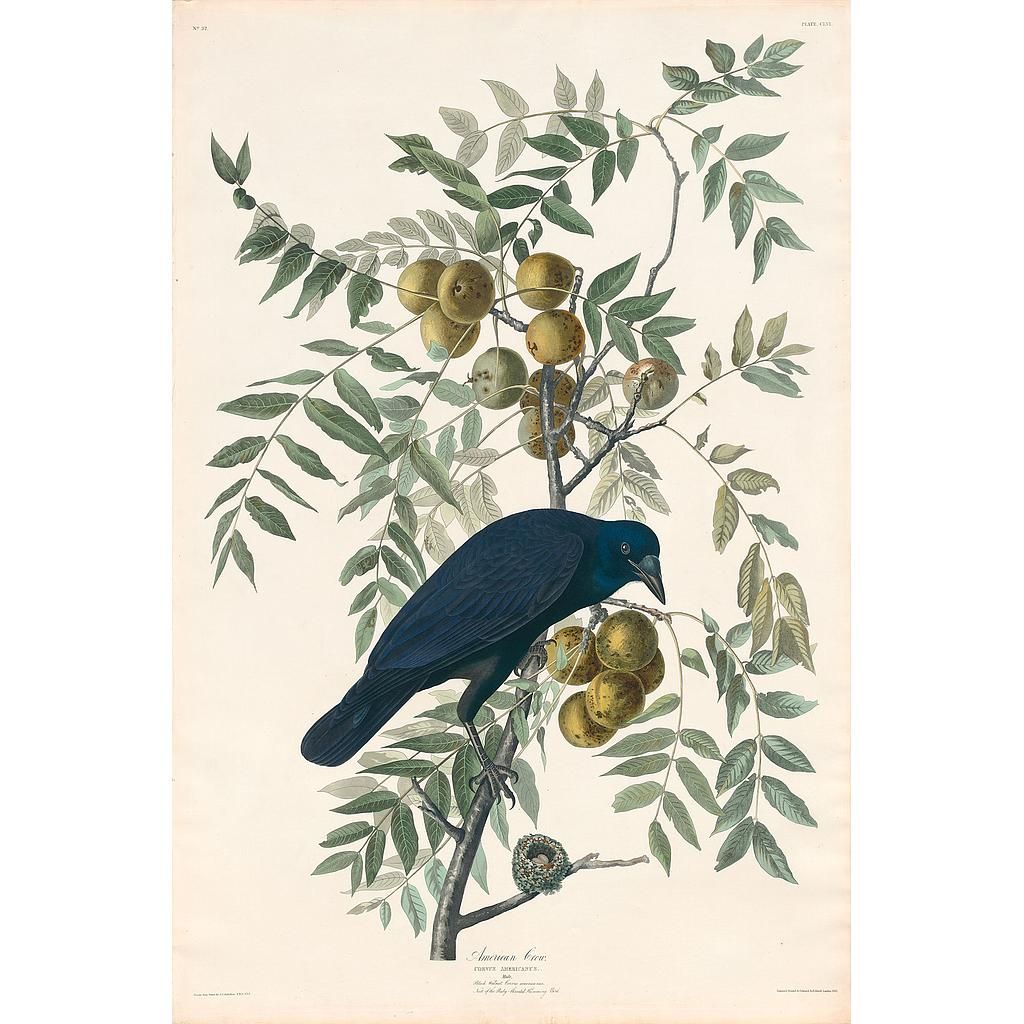 Acquire a superb Havell edition aquatint engraving by John J. Audubon, Plate 156, American Crow, Corvus americanus, available this week only at a substantial discount.  The current scientific name is Corvus brachyrhynchos (Brehm). Audubon depicted a male crow in the size of life. "I have placed the pensive oppressed Crow of our country on a beautiful branch of a Black Walnut Tree, [Juglans nigra], loaded with nuts, on the lower twig of which I have represented the delicate nest of our Common hummingbird."

Audubon's sympathetic portrait of the American Crow is explained in the accompanying text description, where he decries the destruction of crows by farmers and others.

The Crow is an extremely shy bird, having found familiarity with man no way to his advantage. He is also cunning--at least he is so called, because he takes care of himself and his brood. The state of anxiety, I may say of terror, in which he is constantly kept, would be enough to spoil the temper of any creature. Almost every person has an antipathy to him, and scarcely one of his race would be left in the land, did he not employ all his ingenuity, and take advantage of all his experience, in counteracting the evil machinations of his enemies. I think I see him perched on the highest branch of a tree, watching every object around.

...Wherever within the Union the laws encourage the destruction of this species, it is shot in great numbers for the sake of the premium offered for each Crow's head. You will perhaps be surprised, reader, when I tell you that in one single State, in the course of a season, 40,000 were shot, besides the multitudes of young birds killed in their nests. Must I add to this slaughter other thousands destroyed by the base artifice of laying poisoned grain along the fields to tempt these poor birds? Yes, I will tell you of all this too. The natural feelings of every one who admires the bounty of Nature in providing abundantly for the subsistence of all her creatures, prompt me to do so. Like yourself, I admire all her wonderful works, and respect her wise intentions, even when her laws are far beyond our limited comprehension.

The Crow devours myriads of grubs every day of the year, that might lay waste the farmer's fields; it destroys quadrupeds innumerable, every one of which is an enemy to his poultry and his flocks. Why then should the farmer be so ungrateful, when he sees such services rendered to him by a providential friend, as to persecute that friend even to the death? Unless he plead ignorance, surely he ought to be found guilty at the bar of common sense. Were the soil of the United States, like that of some other countries, nearly exhausted by long continued cultivation, human selfishness in such a matter might be excused, and our people might look on our Crows, as other people look on theirs; but every individual in the land is aware of the superabundance of food that exists among us, and of which a portion may well be spared for the feathered beings, that tend to enhance our pleasures by the sweetness of their song, the innocence of their lives, or their curious habits. Did not every American open his door and his heart to the wearied traveller, and afford him food, comfort and rest, I would at once give up the argument; but when I know by experience the generosity of the people, I cannot but wish that they would reflect a little, and become more indulgent toward our poor, humble, harmless, and even most serviceable bird, the Crow.