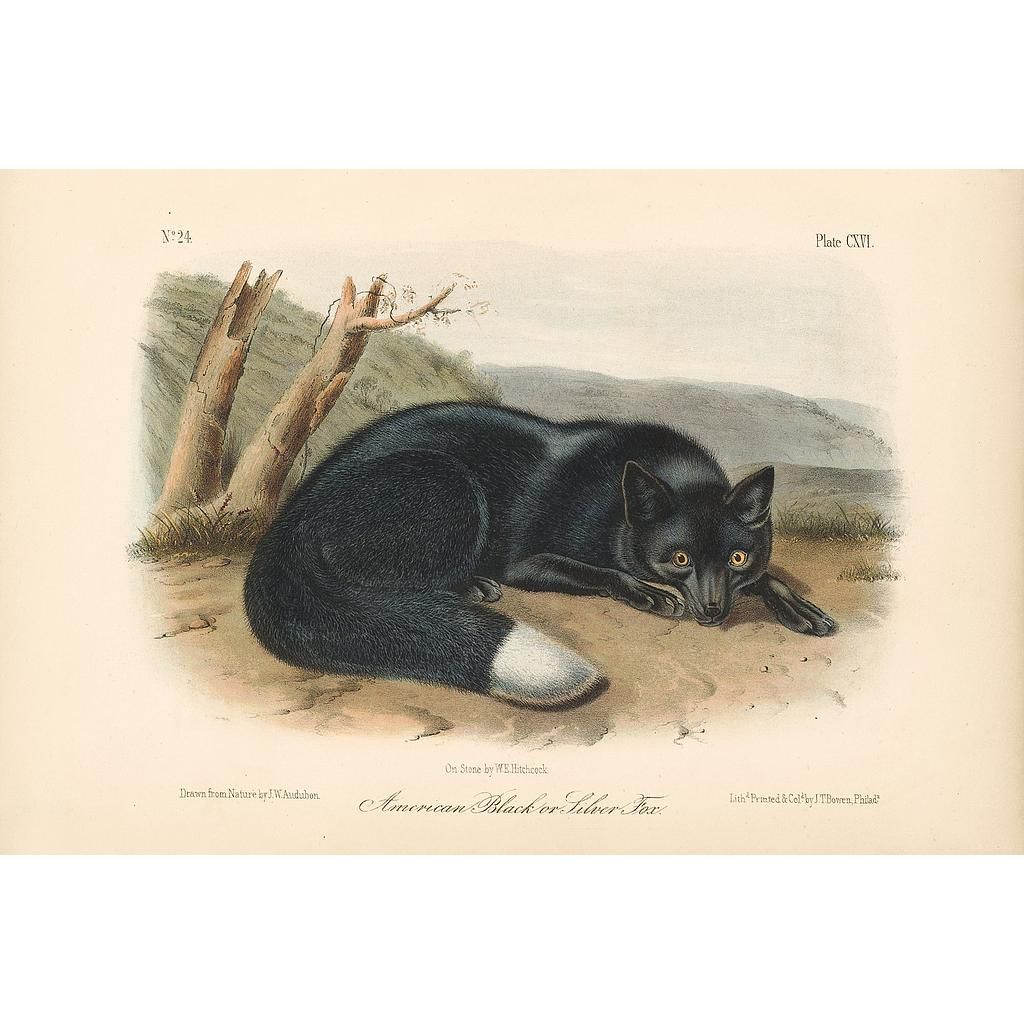 Specimens for the Quadrupeds of North America proved quite elusive. After two expeditions, one up the Missouri River pursued by both Audubon and his son John Woodhouse Audubon in 1843, and a solo expedition to Texas by J. W. Audubon in 1845, yielded few specimens, John Woodhouse Audubon was then dispatched to England from April of 1846 until May, 1847 to represent "those Arctic animals, of which accessible specimens exist only in the museums of that quarter of the globe."

It was in London that the subject for this plate was finally figured. John Bachman remarks in the accompanying text for this plate, "It gives us great pleasure to render our thanks to the Hon. Hudson's Bay Company for a superb female Black or Silver-gray Fox which was procured and sent to the Zoological Gardens alive, where J. W. Audubon was then making figures of some of the quadrupeds brought from the Arctic regions of our continent for this work. Having drawn this beautiful animal, which was at that time tendered us, but thinking it should remain in the Zoological Gardens, as we have no such establishment in America, J. W. Audubon declined the gift in favor of the Zoological Society, in whose interesting collection we hope it still exists. When shall we have a Zoological Garden In the United States?"

John James Audubon’s last major accomplishment was the creation of The Viviparous Quadrupeds of North America which was produced in collaboration with his friend, the naturalist, the Reverend John Bachman, who wrote the accompanying text. In the summer of 1843, Audubon embarked with his son, John Woodhouse, on a final drawing expedition up the Missouri River to document and depict the four-legged mammals of North America.

After John James Audubon passed away in 1951, John Bachman completed the letterpress in 1852. In March of that year, Bachman wrote to a friend that Audubon's older son, Victor Gifford Audubon, was canvassing in the South for subscribers to an octavo edition of the Viviparous Quadrupeds of North America. "The Work (Miniature) will be complete in about thirty numbers, furnished monthly at $1.00 per number. The figures were made by the Audubons, and the descriptions and letter-press were printed by myself. ...I will only add that in my department is summed up the result of investigations pursued through a long life, and, I think, the figures have never been equalled in any publication either in Europe or America."

As with the octavo Birds, the octavo edition of the Quadrupeds was a smaller version of the Bowen edition imperial folio, again printed and hand colored by J. T. Bowen in Philadelphia. Employing a new invention, the camera lucida, J. W. Audubon reduced the images in size. These miniatures exhibit a remarkable amount of attention to quality and detail, as well as a meticulous fidelity to the larger works.