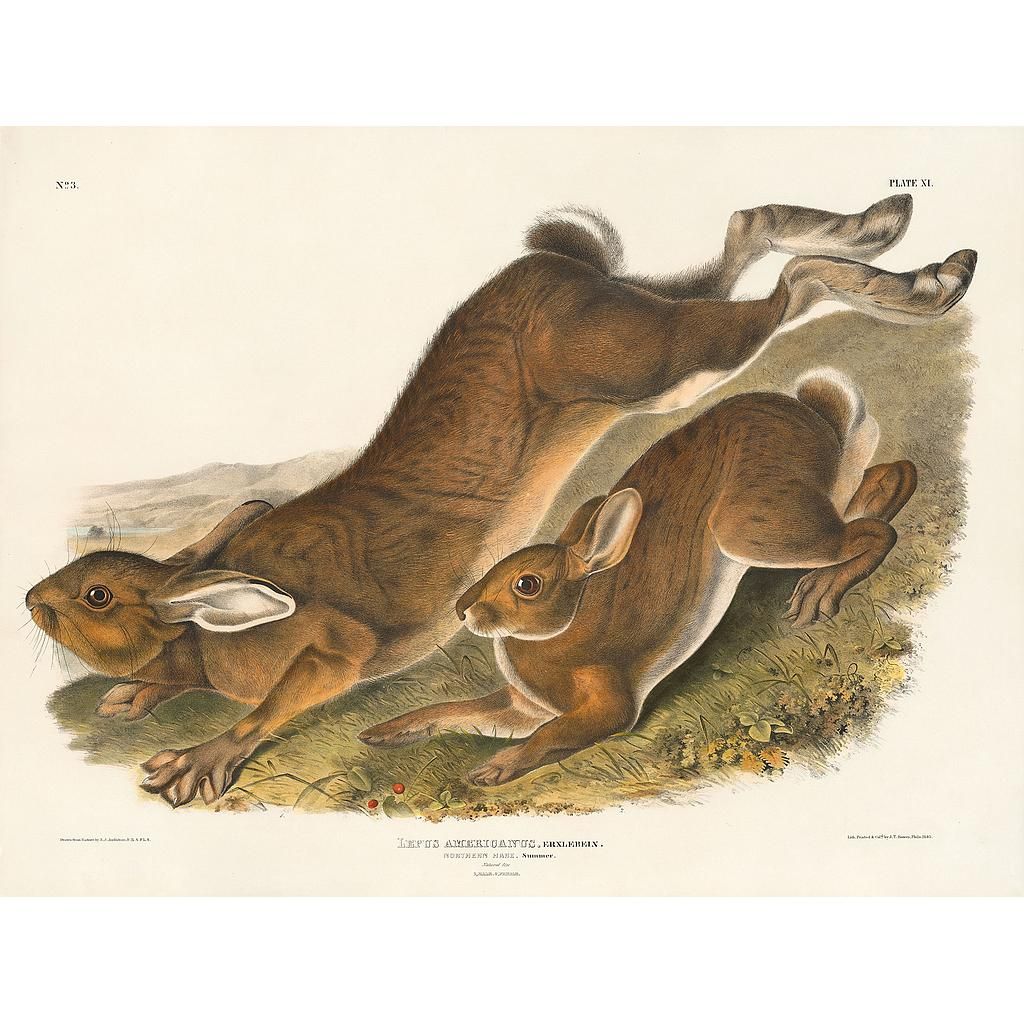 Enjoy special pricing on Plate 11 Northern Hare, Summer, Lepus Americanus, Erxleben. a superb hand-colored lithograph after John James Audubon from the Viviparous Quadrupeds of North America (1845–48). Audubon's lyrical composition represents a male and young female in summer pelage captures the Hares' long legs in swift motion, as they are likely being chased by some unseen predator. In the winter the color of the Northern Hare's fur undergoes a change to almost pure white. Because of this dramatic difference in coloration, Audubon represented it separately in Plate 12, Northern Hare, Winter.

In the accompanying text, John Bachman provides a detailed description of the habits of the Northern hare and corrects issues with its proper identification, stating that "strange mistakes were committed by some of those who wrote on the subject, from Pennant down to Harlan, Godman, and others still later, and one error seems to have led to another, until even the identity of the species meant to be described by different authors, was finally involved in an almost inextricable web of embarrassment." Range, habits, and naming of the gray rabbit and that of the Northern hare had been confused by previous naturalists and repeated in succeeding descriptions in natural history literature. "The history of this Hare has been attempted from time to time, by early and recent travelers and naturalists, and most of their accounts of it are only sources of perplexity..."

"In 1837, having several new species of Hare to describe, we began to look into this subject, and endeavored to correct the errors in regard to the species, that had crept into the works of various authors.

We had not seen Erxleben's work, and supposing that the species were correctly designated, we published our views on the habits, &c., of the two species, (whose identity and proper cognomen we have, we hope, just established,) under the old names of L. Virginianus and L. Americanus, (see Jour. of Acad. of Nat. Sciences of Phila., vol. vii, pl. 2. p. 282). The article had scarcely been printed, before we obtained a copy of Erxleben, and we immediately perceived and corrected that had been committed, giving the Northern Hare its correct name, L. Americanus, and bestowing on the gray rabbit, which, through the mistakes we have already described had been left without any name, that of Lepus sylvanticus, (Jour. Acad. Nat. Sciences of Phila., vol. vii., p. 403.)"