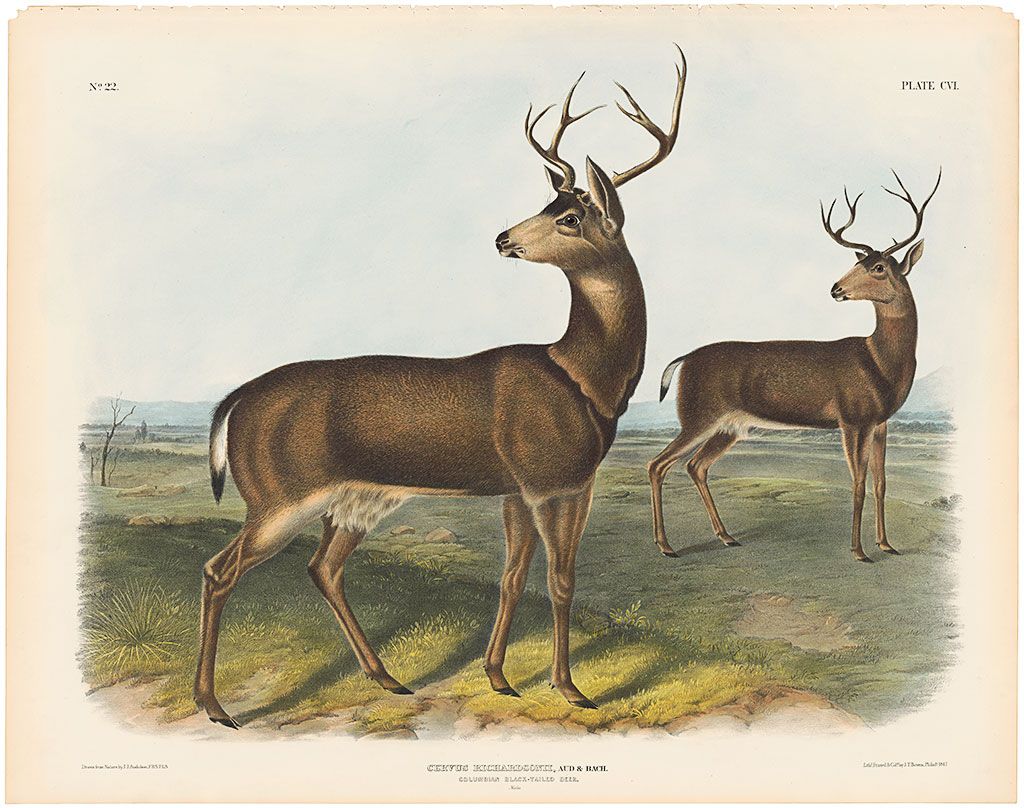 Audubon and Bachman state that, "This beautiful deer is found variously dispersed over the western portions of the North American continent, where it was first noticed by Lewis and Clark, near the mouth of the Columbia River; but not until the discovery of the golden treasures of California did it become generally known to white men."  J. J. Audubon's son, John Woodhouse Audubon, was lured by the promise of gold, and joined an expedition out west in 1849 where he first met with the Columbian Black-tailed Deer "on the eastern spurs of the coast range of mountains after leaving Los Angeles and traversing a portion of the Tule valley in California."

Produced from 1845 to 1848 by the distinguished Philadelphia print maker, John T. Bowen, the set of 150 black-and-white lithographs was completely hand colored. Lithography proved an excellent medium for depicting the tactile realism of the mammals’ fur. These prints were published in imperial folio size, measuring 22 by 28 inches. Acclaimed as the definitive nineteenth-century work in the field of American mammalogy, many of the mammals were drawn by John Woodhouse Audubon (1812–62) with backgrounds contributed by Victor Gifford Audubon (1809–60).  John James Audubon trained both of his sons to become artists during their youth, and he enlisted their talents in creating this folio.

America’s most revered artist-naturalist, John James Audubon (1785–1851), is renowned for his extraordinary undertaking to record the birds of America. The images he created are icons of nineteenth-century art. Though fascinated by nature since childhood, studying and drawing from it, it was not until 1819, when Audubon was 34, that he fully embraced the life of an artist-naturalist. Having found his calling, he set out on a mission to create the Birds of America, exploring the American backwoods and wilderness to discover, record, and illustrate its avian life. Unable to find an engraver in the United States who could produce his great work in the size of life, that issue was resolved when he reached the shores of Great Britain. Together with London engraver, Robert Havell, J. J. Audubon and his family created the lavish double-elephant-size folio of The Birds of America, published from 1827–38, thus spectacularly launching his career as an artist-naturalist and publisher of natural history folios depicting North American birds and animals.