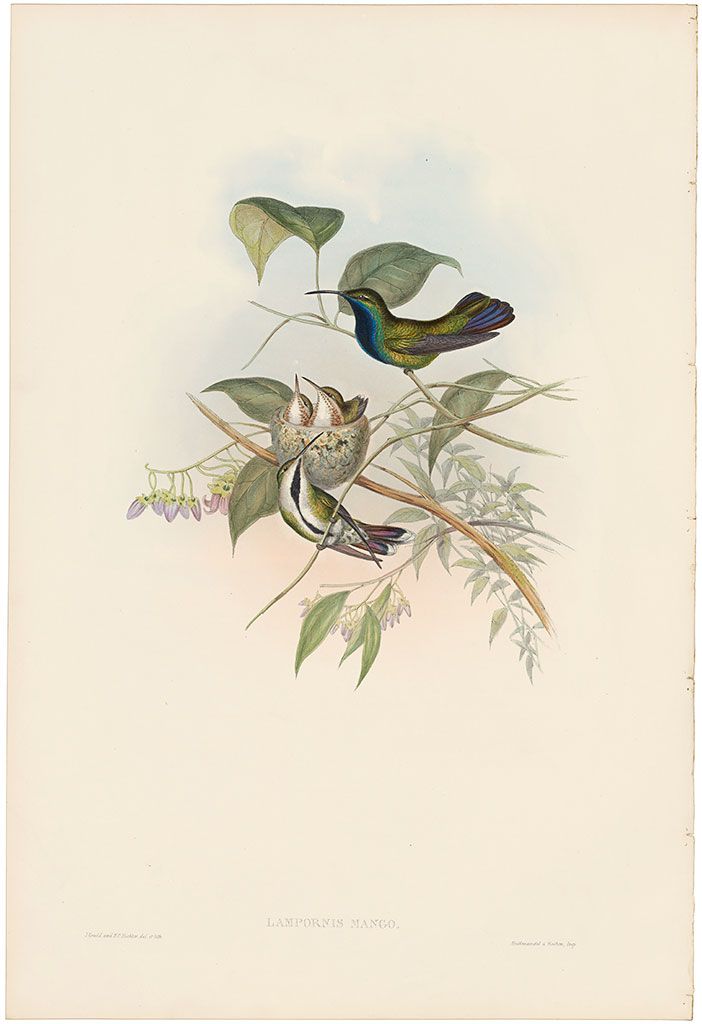 Enjoy special pricing on Pl. 74, The Mango, Lampornis mango (title on plate), Swains., a superb original hand-colored lithograph from John Gould’s Family of Hummingbirds. As an artist-naturalist, an intrinsic part of Gould’s mission was to not only to depict, but to scientifically identify, name, and describe the attributes of each hummingbird. In the preface to this monograph, Gould states, ”I have been unceasing in my endeavors to obtain every species which has been discovered by enterprising travellers of this country, of Germany, of France, and of America.”

In his text entry for this species, Gould notes the confusion in its synonymy. In scientific nomenclature the erm synonymy applies to scientific name(s) no longer in use for identification. Gould acquired evidence of the differences between two different hummingbirds' ranges to clarify their identities based upon the detailed knowledge of hummingbirds he gained through over two decades study of hummingbird specimens, information from examination of previous work on the subject, contact with the leading naturalists in the scientific community in Europe, as well as correspondence with naturalists then studying the flora and fauna throughout the Americas and procuring specimens in the field.

"This familiar species of Humming Bird was not only known to Linnaeus, but to Ray Willoughby, Maregrave, and most of the older authors, and, is in fact one of those with which Europeans first became acquainted; nevertheless, much confusion exists with regard to its synonymy, which I believe is principally owing to a nearly allied species, the Lamporia porphyrurus of Jamaica, having been confounded with it. This bird then it must be understood never goes to Jamaica, and to but a few of the West India Islands; on the mainland, however, it enjoys a more extensive range than any other species. ...[I]t is very generally dispersed over the southern continent for many degrees of latitude along the Andes. I possess examples from Bogota, Guayaquil, Peru, the Caraaccas, the Guianas, the Delta of the Amazon, and all parts of Brazil, as far south as the latitude of Rio de Janiero, in all of which countries it is to be found wherever localities suited to its habits occur" ”

Drawn in the size of life and lithographed by J. Gould and H. C. Richter, a male and a female are depicted with young birds in a nest, and a lovely botanical, Solanum fragrans, Hook. Exquisite hand watercolor painting is magnificently heightened with gold leaf and gum arabic to complete this beautiful composition. In perfect condition, 21.375 x 14.5 inches.