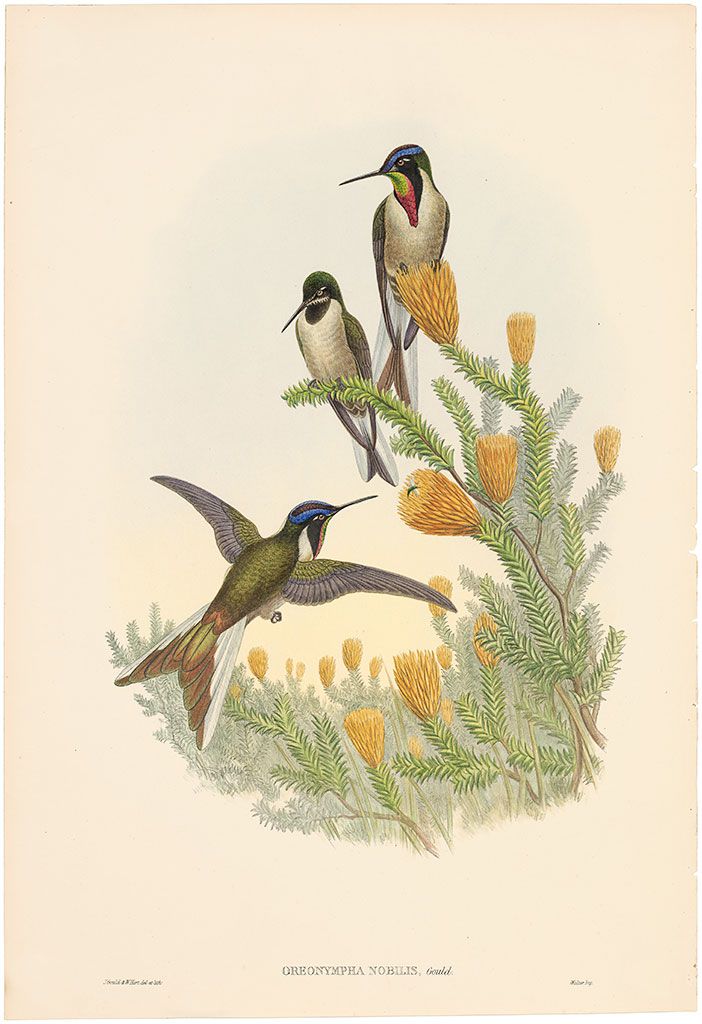 Enjoy special pricing on Appendix Pl. 42A, Bearded Mountaineer, Oreonympha nobilis, Gould., (title on plate), a superb hand-colored lithograph from John Gould’s Family of Hummingbirds.  Two mature male hummingbirds and a female are depicted in the plate. The male hummingbird in the foreground is pursuing a small insect that alighted on a blossom of Chuquiraga insignis, a shrub native to the Andes sent to Gould by the Scottish-Equadoran naturalist and botanist William Jameson.

Gould first described this species in 1869 at the Proceedings of the Zoological Society in London. The specimens depicted were procured in Peru at an elevation of 11,500 feet. In the text entry, Gould is exultant about the beauty of the Bearded Mountaineer.

Nobody who has examined a specimen of this Humming-bird has hesitated to designate it as one of the most striking of the whole family; and as for myself, I look upon it as one of the finest species of Humming-bird that I ever described. Its large size and the great development of the feathers of its crown and beard render it a remarkable bird to look at; and the admirable way in which the original skins were prepared justify the large price of twenty pounds which I had to pay for my first specimen.

After recording the capture of the species, I at once requested Mr. Whitely to write to his son in Peru urging him to endeavor to procure the female, and also to send some notes on the species itself. The result was that the hen bird was soon afterward forwarded by Mr Henry Whitely, together with a note on the habits of the Bearded Mountaineer. "The first specimen," he says, "I obtained of this bird was at Tinta; but I have since found it in the province of Cuzco, and also on the highroad between Tinta and Cuzco. How strange it seems, after so many years have passed since the discovery of Peru, and so many distinguished people have traveled over the same road, that they have never made mention of this beautiful bird!"