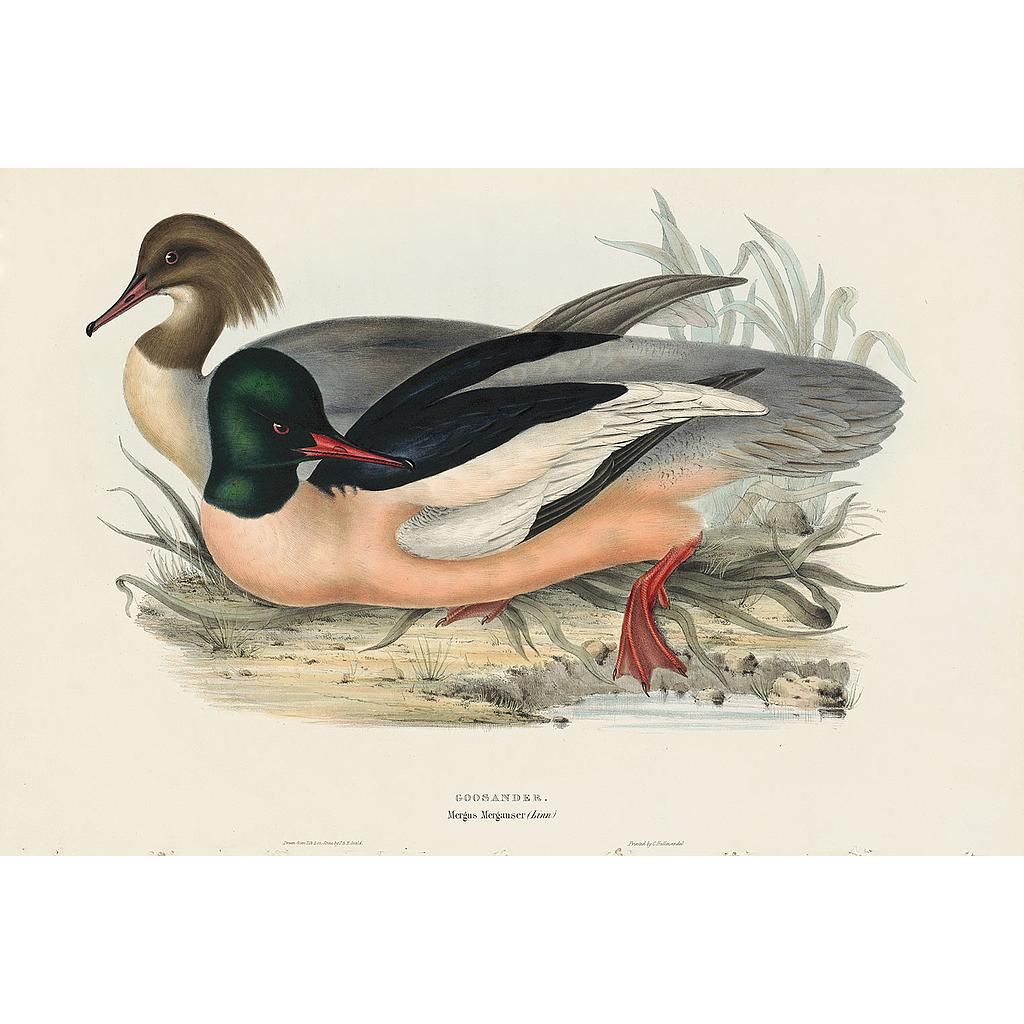 Enjoy significant savings on Pl. 384, Goosander, Mergus mergamser (Linn.), Le Grand Harle, a superb hand-colored lithograph from John Gould’s Birds of Europe. Drawn from nature and signed in the stone by John and Elizabeth Gould and printed by Charles Hullmandel. A male and female are depicted in full plumage, two thirds the natural size.

In the accompanying text, Gould proclaims, “Pre-eminently distinguished by the breadth and boldness of its colouring and the delicacy of some its tints, the Goosander, both from its beauty and superiority of size, is entitled to rank as the finest of its genus; admirably adapted for diving, it possesses great power and agility in the water; its flight also, when once fairly on the wing, is strong and rapid.”

Strikingly beautiful in its flowing design and color, the composition fills the plate. In perfect condition, printed by C. Hullmandel and colored by Gabriel Bayfield in London, 1832–1837. Sheet size measures 14.5 x 21.5 inches.

John Gould (1804–81) was a prolific publisher of ornithological subjects. In nineteenth-century Europe, his name was as well recognized as Audubon’s was in North America. Unlike Audubon, whose life’s work focused on one region, Gould traveled widely and employed other artists to help create his lavish, hand-colored lithographic folios.

John Gould’s love of natural history was fostered in the gardens of King George III where his father was chief gardener at Windsor Castle. At the age of 14, he apprenticed as a gardener at Windsor Castle, where he also became proficient at taxidermy. Gould’s interests quickly evolved, and in 1827 he was appointed taxidermist to the Zoological Society of London. After three years, he progressed to the position of curator of birds and chief taxidermist. In 1830, newly married, Gould and his artist wife, Elizabeth Gould (née Coxen, 1804 – 1841), began their publishing venture. During a career spanning over half a century, John Gould oversaw the publication of more than a dozen folios on birds of the world.