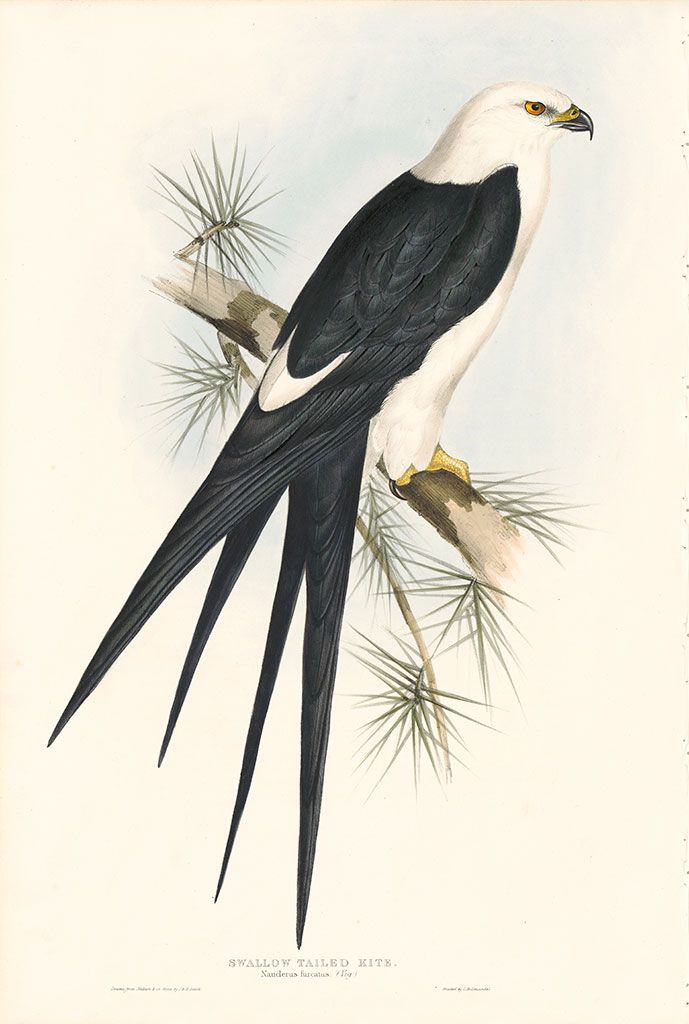 Enjoy significant savings on  Pl. 30, Swallow-tailed Kite, Nauclerus furcatus (Vigors), a superb hand-colored lithograph from John Gould’s Birds of Europe.
In the text that accompanies this plate, Gould reports that, "Two examples of this elegant bird having been taken on this country, the first in Argyleshire, the second in Yorkshire, we have considered that it is entitled to be included among the Birds of Europe, and have accordingly given it a place here. We also agree with Mr. Vigors and Mr. Swainson that this bird requires to be separated generically from those of the genus Elanus of Savigny."
The two specimens found in Great Britain were likely misidentified, as it was later learned that this species is native only in the Western Hemisphere. Interestingly, in the text Gould relies upon the American ornithologists, principally Thomas Nuttall, for details regarding the range of the Swallow-tailed Kite.

For correct knowledge of the habits and manners of this handsome bird we are indebted to the ornithologists of the United States of America, in different parts of which at particular seasons of the year it appears to be very abundant. In the history of this species by Wilson and Mr. Audubon, many interesting details will be found, and as one or the other of these works are in the hands of every lover of nature and ornithology, we shall avail ourselves of the less perfectly known History of the Birds of the United States and Canada by Mr. Nuttall, who says, "This beautiful Kite breeds and passes the summer in the warmer parts of the United States, and is also probably  resident in all tropical and temperate America, migrating into the southern and northern hemisphere. In the former, according Vieillo, it is found in Peru, and as far as Buenos Ayres; and though it is extremely rare to meet with this species as far as the latitude of 40 degrees in the Atlantic States, yet, tempted by the abundance of the fruitful valley of the Mississippi, individuals have been along that river as far as the Falls of St. Anthony, in the 44th parallel of north latitude."

In perfect condition with pristine color. Hand-colored lithograph, drawn from nature in the natural size by John and Elizabeth Gould. Printed by C. Hullmandel and colored by Gabriel Bayfield in London, 1832–1837. Sheet size measures 21.25 x 14.5 inches.