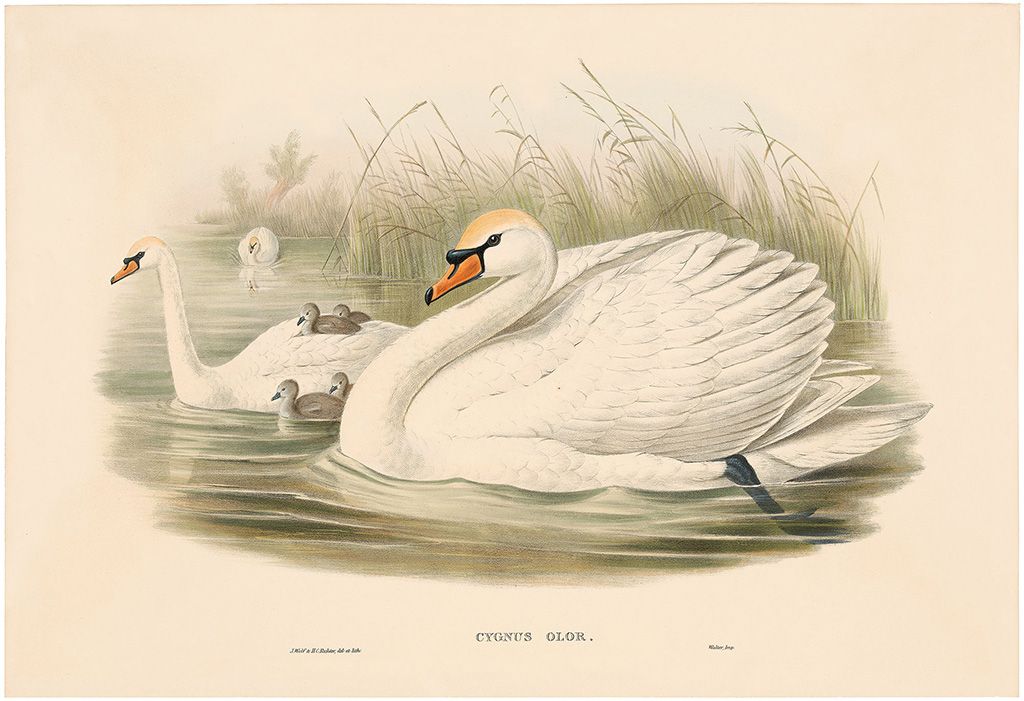 Produced in London from 1862 to 1873 and issued in 25 parts, The Birds of Great Britain was created at the peak of Gould's artistic maturity and is considered by many to be the culmination of his career. Comprising 367 hand-colored lithographs from drawings by John Gould, H. C. Richter, Joseph Wolf, and William Hart, every plate in this folio is appealing. The beautiful colors, dramatic backgrounds and frequent inclusion of baby birds in the composition all contributed to the success of this publication in Gould's day and are why it is so sought after by collectors today.

In the 1873 issue of The Ibis, A Quarterly Journal of Ornithology (Vol. III, page 453), it is noted that parts xxi and xxii were released in August and September of 1872, including this beautiful plate by Joseph Wolf. The mute swan is much prized for its beauty and has had royal status in Britain since the twelfth century. In Bird Illustrators, C. E. Jackson notes, "Wolf's fifty-seven drawings were lithographed, with foregrounds added by both lithographers [Hart and Richter]. Drawn by J. Wolf and lithographed by H. C. Richter, male and female swans are depicted with young, called "cyngets," in a serene natural landscape of a stream lined with tall grasses.

Of the coloring of the plates in the Birds of Great Britain, in 1873 Gould states in the preface, "Many of the public are quite unaware how the colouring of these large Plates is accomplished; and not a few believe that they are produced in some mechanical process or by chromo-lithography. This, however is not the case; every sky with its varied tints and every feather of each bird were coloured by hand...."

John Gould (1804–1881) was a prolific publisher of ornithological subjects. In 19th-century Europe, his name was as well known as Audubon’s was in North America. Unlike Audubon, whose life’s work focused on one region, Gould traveled widely and employed other artists to help create his lavish, hand-colored lithographic folios. John Gould’s love of natural history was fostered in the gardens of King George III where his father was chief gardener at Windsor Castle. Although trained as a gardener, Gould’s interests quickly evolved, and at the age of 20, he was appointed taxidermist to the Zoological Society of London. After three years, he progressed to the position of curator of birds and chief taxidermist. In 1830, newly married, Gould and his artist wife, Elizabeth Gould (née Coxen, 1804 – 1841), began their publishing career.

During a career spanning over half a century, John Gould oversaw the publication of more than a dozen folios on birds of the world. Among Gould’s best known folios are the monumental Birds of Europe, originally published in 22 parts from 1832 to 1837, A Monograph of Ramphastidae or Family of Toucans (1834 and 1854), Monograph of the Trochilidae or Family of Humming Birds (1849–61), Gould’s masterpiece in both breadth and beauty, and Gould's last publication, The Birds of New Guinea and the Adjacent Papuan Islands, Including Many New Species Recently Discovered in Australia, published in London and issued in 25 parts from 1875 to 1888. Works from these Gould monographs may also be found on our website.