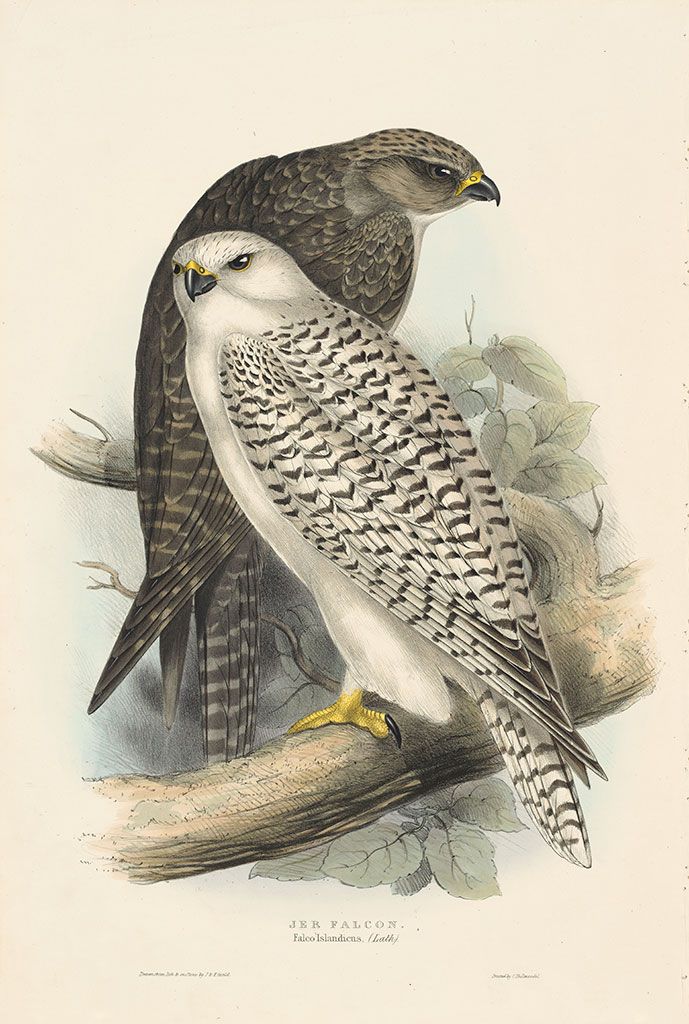 Acquire, Plate 19, Jer Falcon, Falco Islandicus (Lath.), a superb hand-colored lithograph, from John Gould’s Birds of Europe, available this week only at a special price. John and Elizabeth Gould drew and lithographed the raptors in this magnificent plate in which the white plumage of an adult bird in the foreground is contrasted with the brown plumage of a young bird perched behind.

In Gould's text that accompanies this plate in the Birds of Europe, he relates Captain Edward Sabine observations of the Jer Falcon's change in plumage color made during a voyage of discovery in Davis's Straits and Baffin's Bay, off the coast of Greenland: "In his memoir on The Birds of Greenland [1819], Captain Sabine observes, that "the  progress of this bird from youth, when it is quite brown, to the almost perfect whiteness of its maturity, forms a succession of changes, in which each individual feather gradually loses a portion of its brown, to the almost perfect whiteness of its maturity, as the white edging on the margin increases in breadth from year to year; this has been the cause of a variety of synonyms authors in general refer to;" and we may add, will also explain the various changes that occur during the life of this bird, between the two stages of life we have represented by the subjects chosen for our plate."

John Gould’s monumental Birds of Europe, was originally published in 22 parts from 1832 to 1837. It comprises 448 hand-colored folio-size lithographs in five volumes. The five volumes were classed according to a system designed by the zoologist and politician, Nicholas Aylward Vigors (1785–1840). Vigors co-founded the London Zoological Society in 1826. Edward Lear, one of the great ornithological artists of his era, drew and lithographed 67 of the plates and many of the foregrounds, and the balance of the plates were drawn and lithographed by Gould’s talented wife, Elizabeth Coxen Gould, from sketches by John Gould.

John Gould (1804–81) was a prolific publisher of ornithological subjects. In 19th-century Europe, his name was as well recognized as Audubon’s was in North America. Unlike Audubon, whose life’s work focused on one region, Gould traveled widely to study specimens in European museum collections and employed talented artist-assistants to help create his lavish, hand-colored lithographic folios.