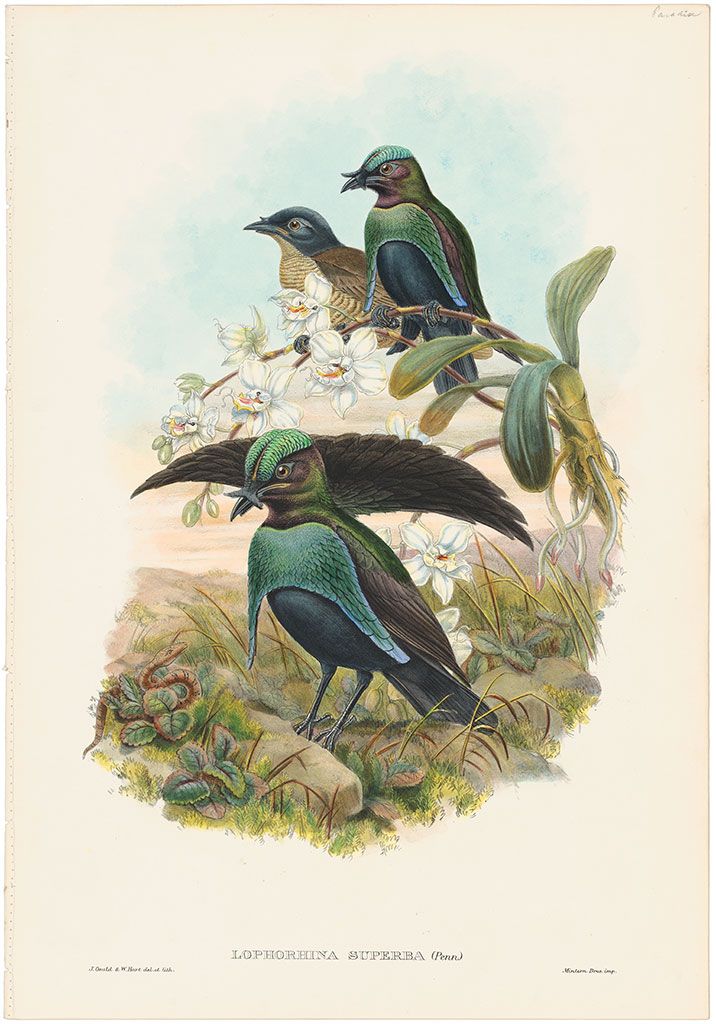 Enjoy special pricing on Pl. 18 Superb Bird of Paradise, Lophorina superba, an exquisite hand-colored lithograph from The Birds of New Guinea by John Gould and Richard Bowdler Sharpe. In the accompanying text, Gould remarks that this native of north New Guinea “stands apart from all the others for its extraordinary mantle, which it is able to elevate behind its head, and in its remarkable breast shield, unlike that of any known species….The principal figure, drawn in a state of excitement, is of the natural size, with a reduced male and female in the distance.”

The lavish composition by John Gould and William Hart features hues of brown, lavender, yellow and blue, and dazzling greens, heightened with gold leaf to highlight the iridescent feathers and exotic form of the birds, which are further enhanced by the arching sprays of a breathtaking white orchid.

In 1889, J. A. Allen, Editor of The Auk Quarterly Journal of Ornithology, Volume VI, reviewed Gould’s recently published Birds of New Guinea, ” The many birds of gorgeous plumage inhabiting New Guinea and neighboring islands—furnish wonderfully striking subjects for illustration. To say that the work is in Gould’s well-known style sufficiently indicates the high character of this magnificent contribution to ornithology.”

Gould’s last publication, The Birds of New Guinea and the Adjacent Papuan Islands, Including Many New Species Recently Discovered in Australia was published in London and issued in 25 parts from 1875 to 1888. Comprising 320 hand-colored lithographs in five volumes, drawn and lithographed by John Gould and William Matthew Hart, work on the folio was completed after Gould’s death by the ornithologist Richard Bowdler Sharpe (1847–1909), who was Curator of Birds at the British Museum from 1872 until 1909. Bowdler Sharpe was solely responsible for the last 13 parts that appeared after Gould’s death.

Sacheverell Sitwell notes in his comprehensive work on natural history monographs, Fine Bird Books, “it was Hart who after Gould’s death made the watercolour drawings for Bowdler Sharpe’s Monograph of Paradiseidae, the last of the Great Bird Books, which was not completed till 1898.”  Sitwell further states, “…it could be argued that the Monograph of the Paradisidae (birds of paradise) 1891-98, is the climax to Gould’s life work. He included many of them in his Birds of New Guinea; but many new species were discovered after his death in 1881, and it fell to Dr Bowdler Sharpe, who completed others of Gould’s projects…. Nevertheless, as we say, it is Gould’s posthumous attempt upon this most glorious of all the families of birds.”

John Gould (1804–1881) was a prolific publisher of ornithological subjects. In 19th-century Europe, his name was as well known as Audubon’s was in North America. Unlike Audubon, whose life’s work focused on one region, Gould traveled widely and employed other artists to help create his lavish, hand-colored lithographic folios.

John Gould’s love of natural history was fostered in the gardens of King George III where his father was chief gardener at Windsor Castle. Although trained as a gardener, Gould’s interests quickly evolved, and at the age of 24, he progressed to the position of curator of birds and chief taxidermist. In 1830, newly married, Gould and his artist wife, Elizabeth Gould (née Coxen, 1804 – 41), began their remarkable publishing career.

During a career spanning over half a century, John Gould oversaw the publication of more than a dozen folios on birds of the world. Among Gould’s best known are the monumental Birds of Europe, originally published in 22 parts from 1832 to 1837, A Monograph of Ramphastidae or Family of Toucans (1834 and 1854), Monograph of the Trochilidae or Family of Humming Birds (1849–61), Gould’s masterpiece in both breadth and beauty, and The Birds of Great Britain, produced in London 1862–73. Works from these Gould monographs my also be found on our website.