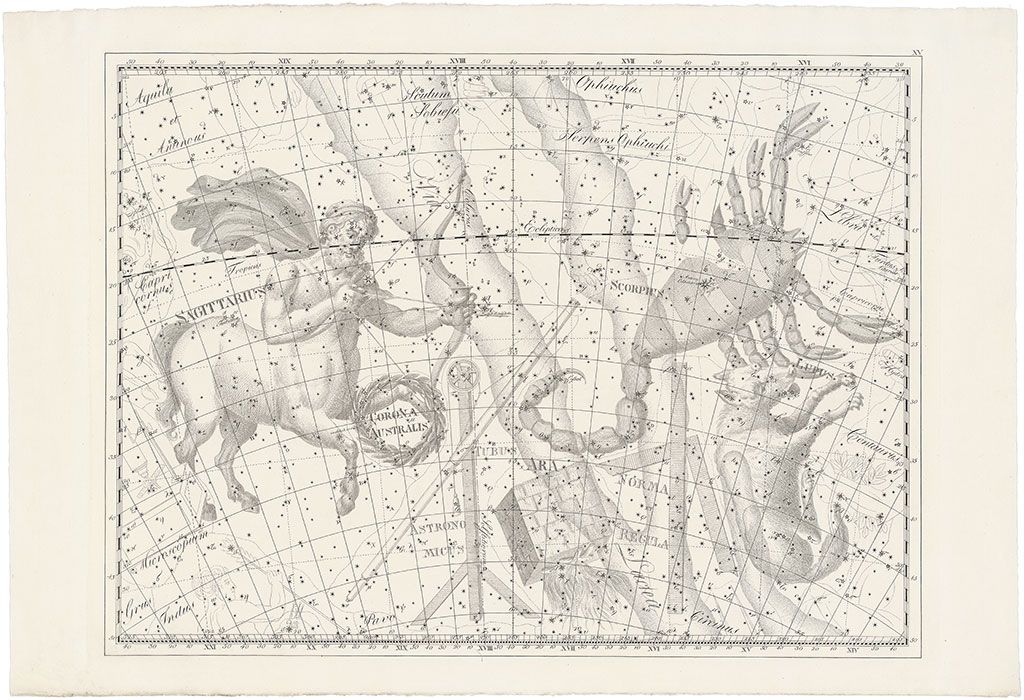 This fascinating and beautiful work is a classically elegant rendering of the constellations. Bode sought to encompass the knowledge of astronomers from the time of Ptolemy to the beginning of the nineteenth century in his celestial charts. The engraved plates are accompanied by a catalogue, Allgemeine Beschreibung und Nachweisung der Gestirne nebst Verzeichnis der geraden Aufsteigung und der Abweichung von 17240 Sternen. (The constellations of the stars as well as the list of straight ascension and the deviation of 17,240 stars), also published in Berlin, which lists 17,240 stars, more than any other star atlas.

In the catalog’s preface, Bode provides an overview of his celestial maps and their use, and presents the subject in the larger context of a sacred contemplation of wonders, (translated below from German).

“This work, which contains principally a complete catalog of the place occupied by all the fixed stars; double, nebulae, and clusters, which are indicated in my Uranography or Atlas of the Celestial Maps in 20 sheets of the greatest form, is of an indispensable necessity for every astronomer, and may become very useful to lovers of high astronomy. It appears here, working with the greatest economy, on 24 sheets, after having cost me five years, and a lot of time and trouble. The whole reflection of the work is sacred to the friends of heaven, who consecrate their leisure to the contemplation of its wonders. I suppose that besides the possession of Uranography, they desire to be instructed in several points relating to the explanation and use of celestial maps, and to learn...the stars In the order of their different constellations.”

This scorpion is symbolic of the evils that spread over the earth when plants are dormant. The poets suggest that the goddess Diana used a scorpion to kill Orion when he angered the her by proposing he to destroy all the wild beasts on earth. In the center of the constellation shines the heart of the scorpion, otherwise called Antares, star of the first magnitude, of a reddish light. Near the latter are two stars of the fourth magnitude, towards the west, a few stars of a bright light are seen, placed in a flat arc at the head and legs of the scorpion. Below Antares, drawing towards the east, are some stars shining at the tail of the scorpion in the milky way. These stars are arranged in a very convex arc, and there are only a few of them which rise upon our horizon.

One of the centaurs of antiquity, Sagittarius is half man and half horse, He represents Chiron, son of Saturn, and the beautiful Philyre, inventor of medicine. He was the schoolmaster of Achilles, of Esculapius, and succumbed to the wound inflicted upon him by an arrow, dyed with the blood of the hydra of Lerna, and this arrow similarly placed in the firmament. This constellation is placed in the zodiac very low towards the south. The Milky Way passes through the arch and the arrow which it holds, and on which are found several stars of the third and fourth magnitudes placed one below the other; to the east of these are four stars arranged and placed in rhombus on the chest of sagittarius. The highest of these in position is today of the second magnitude. Above this group of stars are the head, and the more the east are four stars forming an irregular square on the back of the horse. The southern part of the horse remains constantly for us below the southern horizon. Near the northernmost star of the arc is the point of the winter solstice, which the sun reaches on December 21st.

Published in Berlin by Berolini  in five parts from 1797 to 1801, Bode’s monumental work, Uranographia site Astrorum Descriptio… is the largest celestial star map ever produced and the last of the great star atlases of the Golden Age of the Celestial Atlas. The work of thirty astronomers of the preceding 200 years, including Lacaille, Lalande, Messier, and William Herschel is synthesized in this atlas, and over 100 constellations and asterisms are depicted, many added by Bode. In addition, it includes all stars visible to the naked eye. Some 2,500 nebulae catalogued by William Herschel late in 1700s also are shown. Bode’s accompanying catalogue,  Allgemeine Beschreibung und Nachweisung der Gestirne nebst Verzeichnis der geraden Aufsteigung und der Abweichung von 17240 Sternen. (Berlin), lists 17,240 stars, more than any other atlas. In the preface to the catalogue, here translated from the German, Bode offers this introduction to his work,

In 1765, Bode was introduced to the mathematics professor, Johann Georg Busch (1728–1800), who gave Bode access to his library and instruments. Bode’s first publication, on solar eclipse of August 5 1766, appeared when he was 19 years old. Bode also observed the transit of Venus June 3, 1769, and an made an independent co-discovery of the comets of 1769 and 1770. He is best known for Bode’s law (Bode, 1772), or the Titius-Bode Law, an empirical law that determines planetary distances, originally found by J.D. Titius (1729–96). In 1787, Bode became Director of the Berlin Observatory, a post he held until1825, one year before his death.