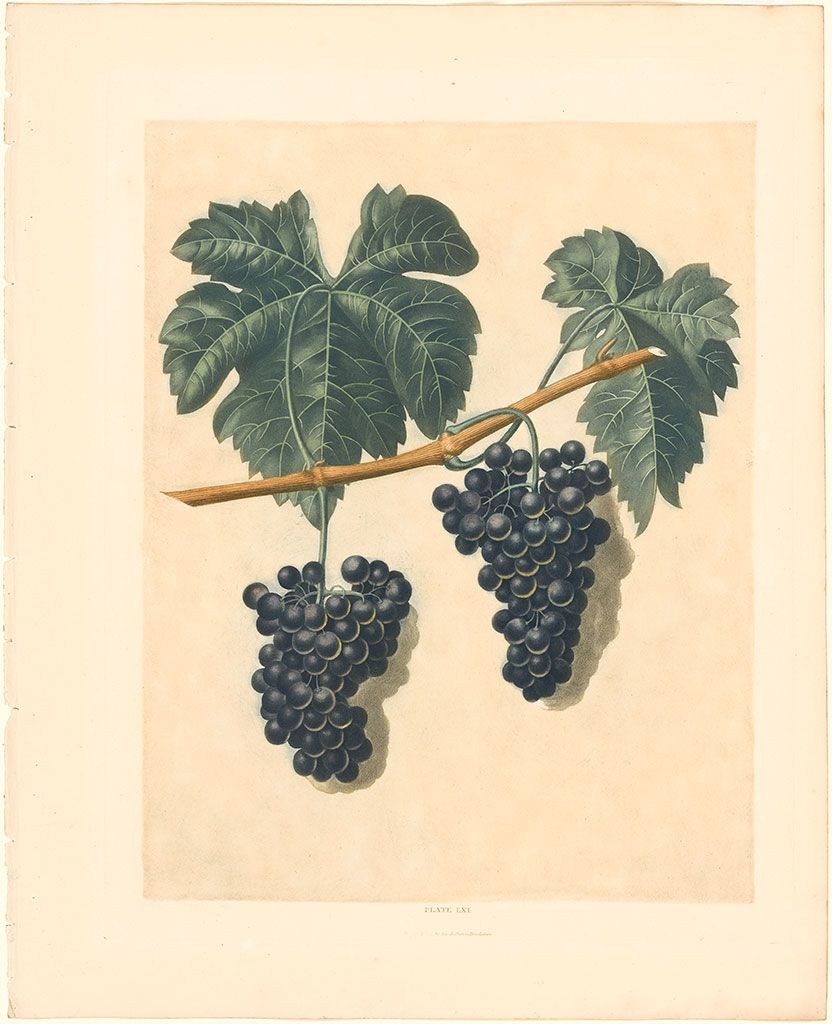 Lend timeless beauty to your home with Plate 61,Lady Bathurst's Tokay Grapes, a superb hand-colored aquatint engraving from George Brookshaw’s masterful folio on fruit, Pomona Britannica, or a Collection of the Most Esteemed Fruits at present cultivated in the country; together with the Blossoms and Leaves of such as are necessary to distinguish the various sorts from each other. Comprising 90 aquatint engravings after paintings by George Brookshaw, Pomona Brittanica was published in London from 1804 to 1812 and engraved by R. Brookshaw and H. Merke.

Brookshaw devoted seventeen plates to grapes (plates 47 to 63), of which a dozen varieties of blue and purple grapes are depicted against a warm cream-colored background and five varieties of green grapes appear on dark brown backgrounds. The title of this plate, Lady Bathurst’s Tokay Grapes, brings together the renowned British family of Bathurst with that of the Tokay grape, and the legendary wine that is made from them. Tokay grapes, grown in the region of Tokaji, Hungary, were used to produce Tokay wine, celebrated as the "Vinum Regum, Rex Vinorum" (Wine of Kings, King of Wines) since the eighteenth century. A vine of deep purple grapes is silhouetted against a warm cream background, accentuating the form and cool colors of the grapes. The highlights and depth of color are particularly beautiful and well-defined in this print. The Bathurst family estate, Cirencester Park, one of the finest formal gardens in England, was created by Sir Allen Bathurst, 1st Earl of Bathurst (1664–1775), who developed a center of high culture there.

In Flower and Print Books of the 18th and Early 19th Centuries, Gordon Dunthorne extolls the virtues of Brookshaw’s large folio edition. “One of the eminent English artists of the early nineteenth century is George Brookshaw, who issued in 1812, Pomona Britannica. Ninety aquatint plates, printed in colour and on a scale comparable to Thornton’s Temple of Flora, depict the fruit grown around London and particularly in the royal gardens at Hampton Court. In Aquatint Engravings, Brookshaw’s Pomona Britannica is described by S. T. Prideaux as “one of the finest colour plate books in existence.” In many of these plates the lovely mellow tones of the fruit glow against the dark or light brown backgrounds.”

George Brookshaw (1751–1823) was born in Birmingham, England where he was apprenticed to Samuel Troughton (d. 1783), a Birmingham painter and japanner. According to a recent blog post related to St. Philips Cathedral, Birmingham, England, entitled In Search of Sobieski Brookshaw, by Gill Partridge, he may have received some art training from his father, also named George Brookshaw, who is listed as an engraver in a document dated 1751. George Brookshaw’s brother, Richard Brookshaw (1736 – c.1804) was a portrait painter and engraver well versed in mezzotint and copperplate engraving techniques, and may have instructed his brother as well.

In 1777, George Brookshaw moved from Birmingham to London and began a celebrated career building fine cabinets detailed with hand-painted botanical and pomological motifs. Shortly thereafter, in 1778, he married Sobieski Grice (1749–1811), daughter of William Grice, a prosperous gunsmith.The Prince of Wales was the most distinguished of Brookshaw’s well-heeled patrons, and today examples of Brookshaw’s cabinetry may be seen at the Victoria & Albert Museum, London.  According to church records noted in Gill Partridge’s post, both George Brookshaw and Sobieski Grice were baptized at the the Birmingham Cathedral.

In his cabinet-making shop, Brookshaw also offered lessons in flower painting to ‘Ladies of Taste and Fashion’. During the mid 1790s, when it appears his furniture-making business went bankrupt, he led his life under an assumed name, G. Brown. In two articles written by Lucy Wood in 1991, she drew the connection between G. Brown and George Brookshaw. During his years of anonymity he worked as an illustrator of botanical books and gave flower-painting lessons, which may have been his primary source of income. Apparently the marriage dowry he enjoyed while married to Sobieski Grice was lost after their marriage dissolved. Brookshaw returned to public view as the earliest parts of Pomona Britannica were issued.