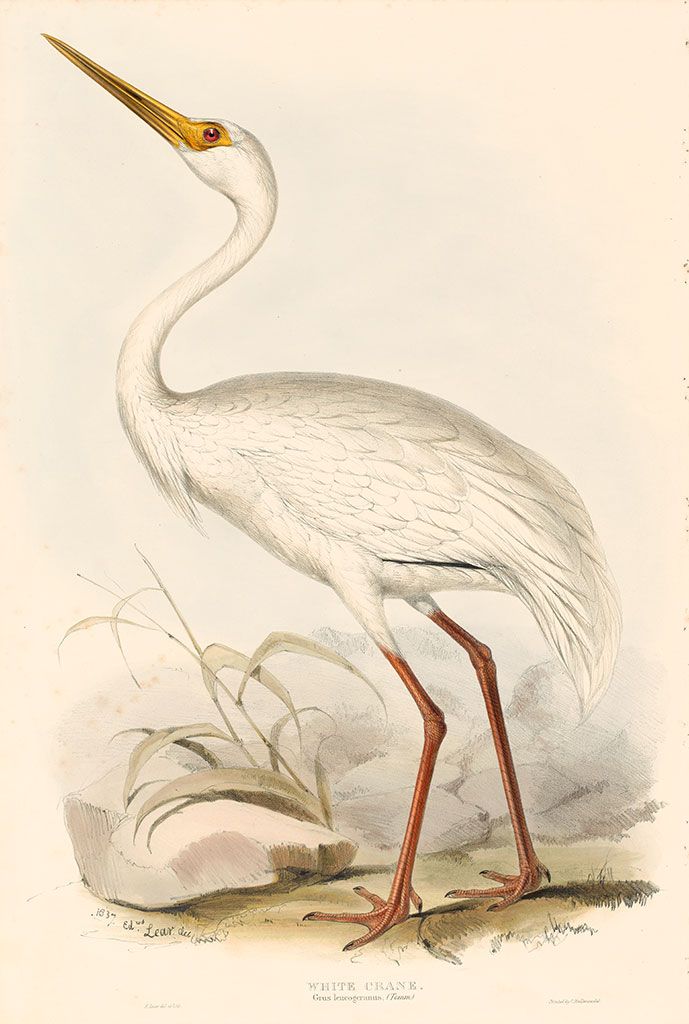 Gould provides the following text description of this species to accompany the plate,

This splendid species of crane having been lately added to the European Fauna, we have deemed it necessary to include it in the present work, and have accordingly figured it from a beautiful specimen of the make presented to us by M. Temminck [Dutch zoologist Coenraad jacob Temminck, 1778–1858], who in a letter accompanying it states that it is one of rarest among the European birds. Its native habitat is doubtless the northern and central portions of Asia, whence its range is extended even to japan, where it is common.. the only European localities in which it has yet been observed are the most easterly portions of the continent.

In size this species exceeds the Common Crane, and independently of its snow-white coloring, it also differs from that species in its much longer bill.

Snails, frogs, the fry and ova of fishes, small crustacea and bulbous roots are said to constitute its food.

The whole of the plumage, with the exception of the primaries, which are brown, is pure white; part of the head red; bill greenish; legs and feet black.

Drawn from nature at one-third of the natural size, and signed and dated 1837 in the stone, Edward Lear's characteristically elegant and exacting portrait is of an adult male specimen. Superb color and condition, printed by C. Hullmandel and colored by Gabriel Bayfield in London, 1832–1837. Sheet size approximately 21.5 x 14.5 inches.